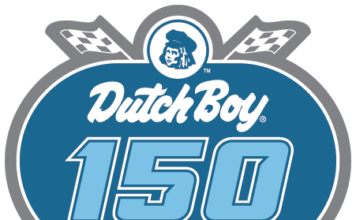 Alan on making his debut at Kansas Speedway: “Another first time track for us, but that’s one of the challenges of being a rookie, so you have to embrace it. Our AUTOParkit Niece Motorsports Silverado should be pretty good at Kansas this weekend. The intermediate package seems to be really fast – we had a lot of speed at Las Vegas – we had a lot of speed last week at Darlington and it’s exciting to go back to that same style track. Our overall performance has been good so far, I just have to figure out how to stay out of other people’s messes. Once I get that part figured out I think we’re capable of getting the No. 45 up front. I wouldn’t count us out.”

On the Truck: Alan will pilot the No. 45 AUTOParkit Chevrolet Silverado Saturday night at Kansas.

Last Time Out (Dead On Tools 200 – Start: 19th / Finish: 26th): Alan and the No. 45 team faced early adversity Friday night when he was sent for a spin in turn three on lap 20 to bring out the caution. Alan rebounded to secure a 24th-place finish in Stage One.

On lap 72 with the end of Stage Two looming, Alan had a right front tire go down and was forced to pit under green for four tires. Fortunately, the caution flag waved two laps later and Alan was awarded the free pass to get back on the lead lap before crossing the line 23rd in Stage Two. Alan continued to battle his way through traffic in the final stage of the night, resulting in a 19th-place finish.

With another top-20 finish, Alan remains the Sunoco Rookie of the Year points leader heading into Saturday night’s race at Kansas.

Niece Motorsports is owned by United States Marine Corps Veteran Al Niece. In 2022, Niece Motorsports enters its seventh season in the NASCAR Camping World Truck Series. Niece also owns Niece Equipment, which has for over 40 years provided clients with reliable products at competitive prices. Niece Equipment’s reputation is built on service, integrity and dependability. The company provides water and fuel/lube trucks that are engineered with quality and durability in mind for the construction and mining industry. Follow the team on Facebook and Instagram @NieceMotorsports as well as Twitter @NieceMotorsport.