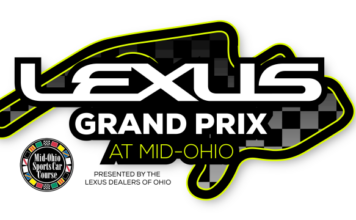 LEXINGTON, Ohio (May 12, 2022) – The 61st season of racing begins at Mid-Ohio Sports Car Course this weekend (May 13-15) with a premier sports car racing event under new title sponsor Lexus. The world-class IMSA WeatherTech SportsCar Championship returns to the 2.258-mile, 13-turn permanent road course in Lexington, Ohio as the Lexus Grand Prix at Mid-Ohio.

The luxury performance automotive company takes on title sponsorship duties for the first time at an IMSA event at a track that holds great significance to the brand. Competing in the GT Daytona (GTD) category, Lexus won three consecutive races from 2018 to 2020 at Mid-Ohio and placed second in class last year. This weekend the Lexus Vasser Sullivan team will enter two cars into the GTD class with a stable of past Mid-Ohio champions behind the wheel. The Vasser Sullivan No. 12 Lexus RC F GT3 will be co-driven by Aaron Telitz and Frankie Montecalvo while the No. 14 machine will be guided by Jack Hawksworth and Richard Heistand. Hawksworth is a two-time victor at Mid-Ohio in the GTD class, winning with Heistand in 2019 and alongside Telitz in 2020. Telitz has also earned two GTD pole positions at Mid-Ohio in 2020 and 2021.

“I couldn’t be more excited to get to Mid-Ohio,” Telitz said. “It’s one of my favorite tracks and has been very strong for our Lexus RC F GT3 car. Vasser Sullivan and Lexus have won three of the previous four races there, and the Vasser Sullivan team has been on pole three years in a row. To make the weekend even better, Lexus is now the official sponsor of the Lexus Grand Prix at Mid-Ohio race. I can’t wait to see all the Lexus supporters at the track as we take it to the competition.”

Five races will take the green flag during the race weekend. The weekend’s headliner is the IMSA WeatherTech SportsCar Championship on Sunday (May 15) at 2:10 p.m. ET, a two-hour, 40-minute sprint race. Lexus will attempt to continue its dominance in the GTD class while three other classes of sportscars compete simultaneously – the Daytona Prototype International (DPi), Le Mans Prototype 2 (LMP2) and Le Mans Prototype 3 (LMP3). In the top-tier DPi division, Meyer Shank Racing, based out of nearby Pataskala, Ohio, will compete for the overall victory after beginning the IMSA season with an endurance race win in the Rolex 24 at Daytona. Team owner Mike Shank is hopeful drivers Oliver Jarvis and Tom Blomqvist can deliver the team’s first victory at their home track.

“I think it’s extremely important,” Jarvis said. “It’s Mike’s home race, the team’s home race, and I believe they’ve never won there. We’d love to put that right – Tom and myself and the team. It would be amazing to win at the home track.”

Saturday’s feature is the IMSA Michelin Pilot Challenge at 4:05 p.m. ET in a two-hour timed race. Also, in store for race fans is a doubleheader for the Idemitsu Mazda MX-5 Cup and an IMSA Prototype Challenge race on Sunday morning.

For fans in attendance, Lexus will have racing simulators available for fans to try at the Lexus Racing Experience in Manufacturer’s Midway. The simulators will be open all weekend and the fastest performers will be invited back on Sunday to compete in a championship round.

Additional, fan activities include autograph sessions with Mazda MX-5 Cup drivers on Saturday (May 14) from 2:30 – 3:00 p.m. ET and IMSA WeatherTech drivers on Sunday (May 15) from 11:00 – 11:30 a.m. ET, respectively. Fans will also have two chances to walk the track – the first on Saturday (May 14) prior to the Michelin Pilot Challenge and the second on Sunday (May 15) before the start of the Lexus Grand Prix at Mid-Ohio.

Tickets are sold in advance and available at the gate to the Lexus Grand Prix at Mid-Ohio. Children 12 and under receive free general admission when accompanied by a ticketed adult. All the ticket options and pricing are posted online at midohio.com.

A comprehensive motorsports facility in Lexington, Ohio, Mid-Ohio Sports Car Course sits on 380 acres and features a permanent road-racing circuit with two primary race track configurations: 2.4-mile, 15-turn or 2.258-mile, 13-turn layout. Located 60 miles north of Columbus and 75 miles south of Cleveland near Mansfield, the natural terrain road course is commonly referred to as the “Most Competitive in the U.S.” and annually hosts a diversity of locally, regionally and nationally sanctioned race events for amateur, club and professional drivers and riders. It is also home to The Mid-Ohio School, featuring over 20 driving and riding courses, for teenagers to professional racers using Honda vehicles. Opened in 1962, Mid-Ohio Sports Car Course has been owned and operated by Green Savoree Mid-Ohio, LLC since 2011, just the raceway’s third private ownership group in its history.