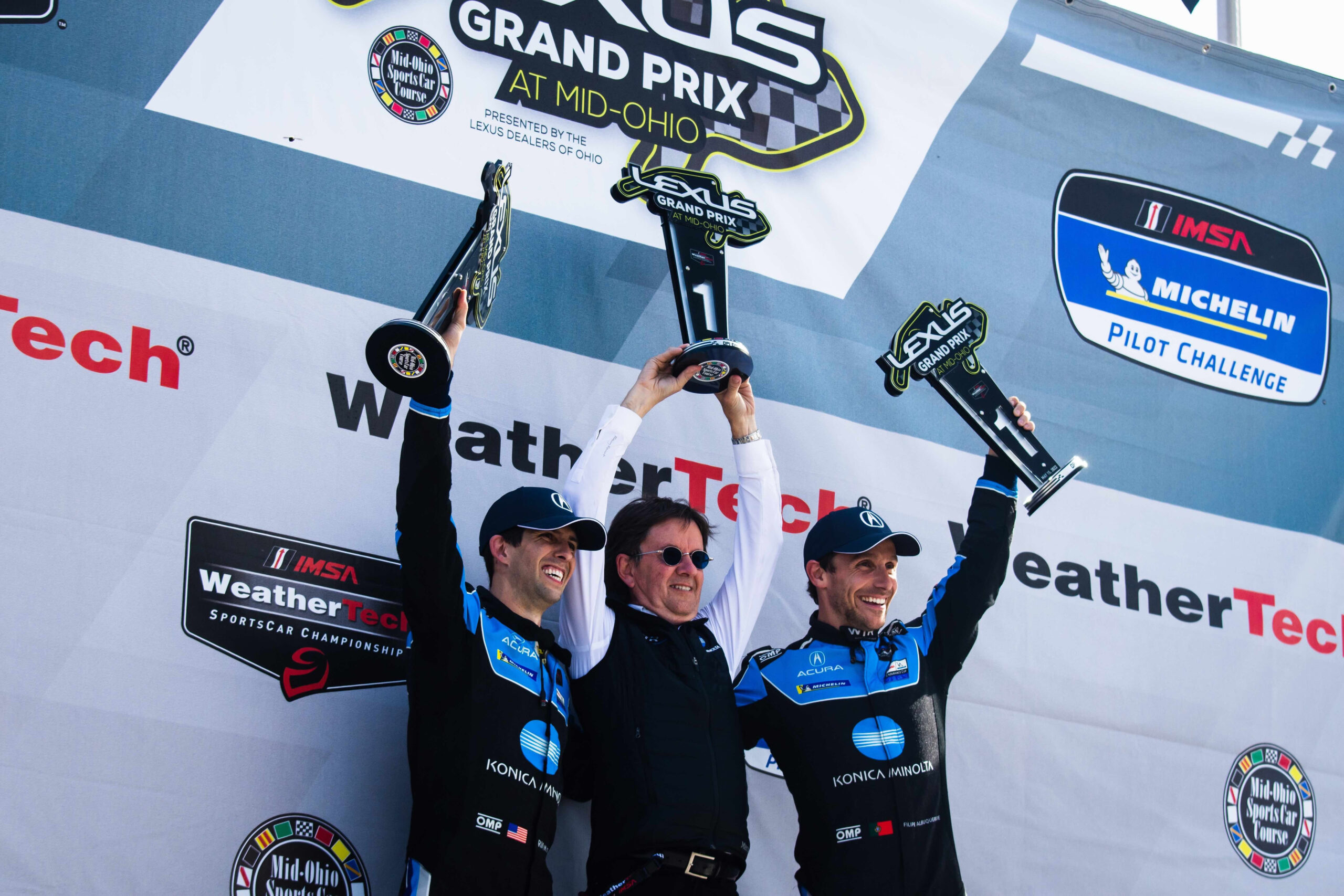 Lexington, Ohio (May 15, 2022) — In today’s Grand Prix of Mid-Ohio, the No. 10 Konica Minolta Acura ARX-05 team fought hard for their second consecutive victory of the season and second win in a row at the Midwest road course. The blue and black machine led an Acura one-two finish at Honda Performance Development’s “hometown” race, catapulting them into the lead of the IMSA WeatherTech SportsCar Championship with a total of 1,707 points.

True to form, Filipe Albuquerque got an unbelievable run at the green flag and took the lead around the outside of the first corner. He held first position for the first 13 minutes of the race before the polesitter bumped his way back past. Undeterred, Albuquerque handed the car to Ricky Taylor in second position with exactly two hours remaining.

With an hour down, co-driver Ricky Taylor proved he was on the hunt by setting the fastest lap of the race. He closed the gap to former Wayne Taylor Racing driver, Renger van der Zande, making a move around the outside that was highly reminiscent of Albuquerque’s move on the opening lap. This time, the two cars made contact, but Taylor’s Acura came away the better of the two, driving into the lead. He drove expertly, avoiding traffic and spinning prototype cars ahead to secure another impressive win for the team.

“I’m so happy here in Mid-Ohio,” said Ricky Taylor. “The Konica Minolta guys nailed it all day. We may not have been the favorite coming in. After practice and qualifying we thought that we needed to find a bit more pace, but the end result is amazing. We come away with a fifth straight victory for Acura at Mid-Ohio, second in a row for the team and we got the points lead back. So many great things happened today. We have about half of the season left, so we need to keep up the intensity and the pressure. That’s how we got the points lead today, and that’s how we need to finish the season.”

“What an amazing race,” said Filipe Albuquerque. “I’m so happy for this group of people—amazing job by everyone. It was a great start from my side, to be able to go into first position. It’s super tricky to start here on the outside, and then the car was super, super tricky on old tires, especially with them being qualifying tires. I was really worried whether we could do another two hours and Ricky pulled it out amazingly. I tried to help the team with whatever I could to help Ricky. The car came back to us and Ricky did a fantastic job and he pulled it off again. We’re going back and forth with who is finishing and who does the best job. Perfect job by everyone in the Konica Minolta Acura team.

“I’m so proud of this team and all of our partners at HPD, Acura, Konica Minolta, Harrison Contracting Company and the guys,” said team owner Wayne Taylor. “The pit stops, the strategy by Brian [Pillar], Logan [Sprung], the drivers—Filipe doing a good job on tires that he used in qualifying, which were terrible, but to keep that position and then hand the car to Ricky was all excellent. For Ricky to stay in for so long and make that maneuver on the No. 01 car basically got us the win. I’m ecstatic.”

The 2022 IMSA WeatherTech SportsCar Championship season continues for the No. 10 Konica Minolta Acura ARX-05 in two week’s time with another sprint race, the Detroit Grand Prix. Practice 1 begins at 8:00 a.m. ET on June 3rd. Green flag for the 100-minute sprint waves at 3:10 p.m. ET on Sunday, June 4th. Full coverage, starting at 3:00 p.m. ET, can be streamed on Peacock or viewed on USA Network.
ABOUT KONICA MINOLTA