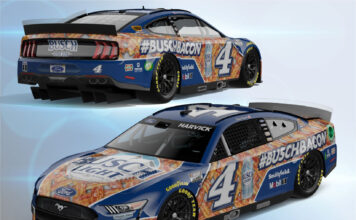 ● While Kevin Harvick is racing for some cold, hard cash on Sunday night in the $1 million-to-win NASCAR All-Star Race, fans can tweet for something even better – beer and bacon for life. The Stewart-Haas Racing driver has joined his teammate, Aric Almirola, to deliver a lifetime supply of Busch Beer and Smithfield Bacon to the luckiest fan in the history of sponsor promotions. All fans need to do is tune into FS1’s broadcast of the All-Star Race beginning at 8 p.m. EDT on Sunday and follow @BuschBeer. Then, during the fourth lap and the 10th lap of every stage of the All-Star Race, tweet #BuschBacon for a chance to win the most coveted prize mankind has ever known – Busch Beer and Smithfield Bacon for life. Throughout the All-Star Race, Harvick’s No. 4 #BuschBacon Ford Mustang and Almirola’s No. 10 Smithfield #BuschBacon Ford Mustang will drive home the point that crispy Smithfield Bacon is best paired with a crisp Busch Light.

● Harvick has always been an all-star. Since his 2001 NASCAR Cup Series debut, Harvick has been a part of every NASCAR All-Star Race – the only active driver to do so. The driver of the No. 4 #BuschBacon Ford Mustang first earned entry into the All-Star Race by winning in just his third career Cup Series start on March 11, 2001 at Atlanta Motor Speedway. Sunday at Texas Motor Speedway in Fort Worth marks the 38th anniversary of the All-Star Race and it will be Harvick’s 22nd straight appearance in the race – the most of any active driver.

● Harvick is a two-time winner of the All-Star Race. He won the specialty non-points race for the first time in 2007 by leading the final 20 laps and crossing the stripe .141 of a second ahead of second-place Jimmie Johnson. Harvick scored his second All-Star win in 2019 when he led twice for 36 laps, including the last 11, to take the victory by .325 of a second over Daniel Suárez. Both victories came at Charlotte (N.C.) Motor Speedway.

● This year’s All-Star Race at Texas will be 125 laps and broken into four stages with the starting lineup being determined by a four-round qualifying format featuring head-to-head elimination rounds that highlight the speed and efficiency of each team’s pit crew. Here’s how qualifying will work:

● Once the starting field is set, the 38th edition of the All-Star Race will consist of four stages, with the first three stages 25 laps in length and the fourth and final stage being a 50-lap shootout for the $1 million prize.

Kevin Harvick, Driver of the No. 4 #BuschBacon Ford Mustang

In this era of constant development with the NextGen car, is the All-Star Race a useful test session, both in terms of what you can learn now and what you can apply to Texas when you return there in late September for a regular, points-paying race?

The 38th All-Star Race takes place Sunday at Texas. There has seemingly been 38 different sets of rules and formats for the All-Star Race. When do you attempt to figure out the rules and what you need to do during the race?

“I’ve just gotten to the point where I don’t even pay attention to the rules and I just let them tell me the rules when we get there. It’s just too much to take in until the week of the race. I have Rodney (Childers, crew chief) give me an explanation before we go race because it’s up to them as far as what the strategy needs to be and how many sets of tires you have.”

The one thing that has stayed the same over the years is the $1 million payout. How much of that do you get and what do you get to do with it?

“I would say that each driver probably has a little bit different of a deal. Usually that percentage kind of varies between drivers, but you definitely don’t get it all.”

“I was fortunate to win the first year and qualify for the All-Star Race and, after that, we were able to win the All-Star Race a couple of times, so we make sure we stay in it every year. Obviously, winning a championship doesn’t hurt with your qualification for that, either. For me, I think as you look at the All-Star Race, it’s fun to be a part of. It’s unique and it’s different and all those things combined, so it’s always been an interesting race.”