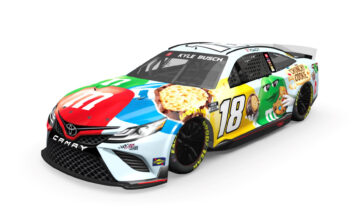 HUNTERSVILLE, North Carolina (May 17, 2022) – With 13 NASCAR Cup Series points-paying races in the books and just 13 races to go before the playoffs start, it’s time for the annual NASCAR All-Star Race. Sunday’s All-Star Race will be the 37th edition of the event and for the second consecutive year it will be held at Texas Motor Speedway in Fort Worth.

With his extensive winning resume, Kyle Busch, driver of the No. 18 M&M’S Crunchy Cookie Toyota Camry for Joe Gibbs Racing (JGR), is an all-star in every sense. Busch locked in his spot for Sunday night’s main event – comprised primarily of 2021 and 2022 Cup Series race winners, plus past All-Star Race winners and past series champions – via his two 2021 wins, as well as his win last month at Bristol. The Las Vegas native is certainly worthy to carry the title of all-star, having recorded 223 career wins in NASCAR’s top three divisions and sitting alone in ninth place on the all-time Cup Series wins list with 60. The two-time Cup Series champion brought home his first All-Star Race victory in 2017 at Charlotte and hopes to add another at Texas this weekend.

This year’s All-Star Race will consist of four stages, with the first three 25 laps in length and the fourth a 50-lap shootout for the $1 million prize. The new format has provided a major incentive to win any of the opening three stages or the pit stop competition during the break between Stages 2 and 3. Below is a breakdown how each stage will work:

● Special Stage Break (Pit Stop Competition): Each team must pit and perform a four-tire stop. The team with the shortest time on pit road (pit in to pit out) wins the pit crew award and the driver will start fourth in the final stage as long as he finishes 15th or better in Stage 3.

● Stage 4 (50 laps): Stage 1 winner starts first, Stage 2 winner second, Stage 3 winner third and pit stop competition winner fourth. If a “natural” caution occurs between laps 15 and 25 of the final stage, standard race procedures will be in effect. If no “natural” caution occurs during that time, NASCAR will call an “All Star” competition caution. Winner of Stage 4 earns $1 million.

M&M’S Crunchy Cookie will once again be adorning Busch’s No. 18 Toyota in Sunday night’s All Star event. M&M’S Crunchy Cookie combines two favorite treats – M&M’S and chocolate chip cookies – and is now available nationwide. It’s bound to give race fans a fun, nostalgic snack to enjoy during this weekend’s race.

So as Busch heads back to Texas for the second-ever All-Star Race in the Lone Star State, he’ll look to bring home his second All-Star Race victory, along with the traditional Texas victory lane cowboy hat, in Texas-style All-Star fashion.

What about the All-Star Race makes it so special for you?

“I think it’s just all about the money on the line. There’s a completely different set of how the race is going to unfold and things like that, but you essentially still have your stages, but they are mostly shorter. Other than that, it’s just about trying to go out there and win that million dollars and bring home a check or bring home a steering wheel, I guess, with our M&M’S Crunchy Cookie Camry.”

What does it mean to be a part of the All-Star Race in this sport?

“It matters, especially with who your fellow competitors are. For us, being an all-star and being in the All-Star Race is one of the most fun things we get to do each year. I’d say the Clash is another one of those and, with the All-Star Race, they are certainly two fun races where we get a chance to go after just a win and bring home the checkers or end up on the wrecker. It’s an exciting night and there’s a lot of energy there. It gives you the opportunity to run that many qualifying laps in a row. That’s all you’re doing – you’re giving it all you’ve got every single lap. You’re definitely up on top of the wheel and your guys do the best they can to give you a good car and to make it as lightweight as possible and throw away the air conditioning unit and keep all the front fans away from you – no radiator fan. All that stuff, just try to lighten that baby up and make it fast.”

What driving style does it take to succeed in the All-Star Race?

What drivers do you think are best suited for the All-Star Race?

“You look at the guys who historically are better in qualifying. I think qualifying well can always lend itself to racing the All-Star Race well because you’re running however many laps that segment is, which is usually short, and you’re running that many qualifying laps in a row. You’re just trying to get the most you can out of your car there. It’s sometimes hard to pass because the guy in front of you is trying to get the most out of his car and so are you, so you just can’t get there.”

● 17 and Counting: The NASCAR All-Star Race at Texas Motor Speedway in Fort Worth will mark Kyle Busch’s 17th appearance in the non-points event.

● ‘Bring Home the Steering Wheel or the Trophy:’ Busch has led 236 laps in his 16 previous All-Star Race starts and brought home his first win in his 12th start in the non-points event in 2017 with a three-wide move on the final restart.

● 223 and Counting: While the All-Star Race is a non-points event, and a win won’t add to his tally, Busch currently sits at 223 overall wins among NASCAR’s top three series. In addition to his 60 Cup Series wins and 102 in the Xfinity Series, Busch has 61 wins in the Camping World Truck Series. Busch has five total Cup Series non-points wins, which include two Clash wins, one All-Star Race victory, and two wins in the Duel qualifying races for the Daytona 500 at Daytona (Fla.) International Speedway.