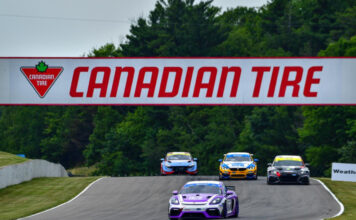 BOWMANVILLE, Canada (July 2, 2022) – Hardpoint’s Nick Galante and Sean McAllister climbed as high as fourth on the timing chart before settling in to a 14th place finish in the No. 22 Racing To End Alzheimer’s Porsche 718 Cayman GT4 RS Clubsport on Saturday at Canadian Tire Motorsports Park, Round Six of the IMA Michelin Pilot Challenge season.

Saturday’s race was made even more difficult following a practice one crash on Friday. The contact, made with a concrete wall in Turn One rather than a tire barrier, caused damage to the left side, including most suspension pieces. The force of the contact also damaged the transmission and exhaust, forcing repairs all day on Friday and through the day Saturday to make the start of the race.

Galante made up two spots on the opening lap and a third position on the second lap, gaining ground early from the last and 17th starting position. The Racing to End Alzheimer’s Porsche Cayman was up to 13th position at the first full course caution of the race, just under 20 minutes into the race.

Hardpoint elected not to pit under that full course caution, which elevated them to eighth on the restart. Galante picked up another position on the restart to get to seventh.

Galante dove to pit lane with 55 minutes to go in the race after climbing to fourth place. McAllister rejoined the race following the green-flag pit stop in 13th position, but good to go to the end of the race.

McAllister had a big off with just under 20 minutes to go, but was able to keep it out of the tires in the high speed turn three and finish the race one lap down, finishing 14th.

Hardpoint, Galante, McAllister and the No. 22 Racing To End Alzheimer’s Porsche Cayman return to action in just two weeks, July 15-16 at the Lime Rock Park 120 at Lime Rock Park in Lakeville, Connecticut.

Nick Galante, Driver, No. 22 Porsche Cayman: “The start was great. Even though we started at the back, we were able to work our way to seventh. The crew worked all night and I had a little extra fire to not let them down and have all their hard work go for something. We were down on pace overall from the leaders so we had to do it with strategy. Our engineer Charles Hamm made a good call, we pitted perfectly just as the car was running out of gas. The leader’s pace was just a little more than we could handle, though and those yellows didn’t come at the right time. But I’m really happy to be part of the Racing to End Alzheimer’s foundation which is taking off and we’re on our way to getting 222 names on the car in honor of our car 22 here at Hardpoint. You can be a part of it at R2EndAlz.org too!”

Sean McAllister, Driver, No. 22 Porsche Cayman: “The race went well. We had a little bit of an off going through Turn Three, but we were able to get the finish secured. It was a great job by the Hardpoint crew to get the car back together. They did a hell of a job. They were out here for 12 hours working on it, so I have to thank them for putting together a car that we were able to race.”