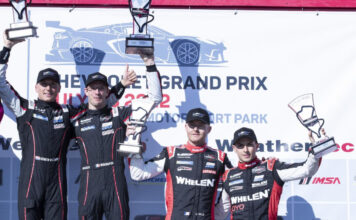 BOWMANVILLE, Ontario (July 3, 2022) – There are slices of the 2.459-mile, 10-turn Canadian Tire Motorsports Park that can either slow you down or provide overtaking opportunities, Renger van der Zande noted in the days leading up to the Chevrolet Grand Prix.

The co-driver of the No. 01 V-Performance Academy Cadillac DPi-V.R saw such a scenario develop with about 10 minutes remaining in the 2-hour, 40-minute race, which he quickly determined was an opportunity – possibly his only one – to move to the front of the field.

With his intended target approaching traffic in Turn 2, van der Zande threaded the No. 01 Cadillac Racing entry past the pole-winning No. 60 Acura and an LMP3 pack and into clean air and the eventual victory by 3.569 seconds. He set up the opportunity on a restart with 18 minutes left by overtaking the No. 5 Mustang Sampling Cadillac DPi-V.R for second.

It was the second victory in the past three races and third overall on the season for van der Zande and teammate Sebastien Bourdais.

“I going to go back to the gym. This was hard work,” said van der Zande, who was runner-up in the 2018 race at CTMP in a Cadillac DPi. “The power steering was a big issue all race long. Seb came in and was like, ‘Oh, I’m not sure we’re going to make it.’ You need these fast corners and the power steering kept cutting (out).

“At the end, it got better and I was like, man if I can have a normal car with normal power steering, I might have a chance for a move. And then I was all in now. I went from first back to last, back to wherever. Then I thought, this is my day, I’m going to go for it. It was a great win.”

Van der Zande led 23 laps, including the final 10 after the decisive pass. With the victory, the No. 01 Cadillac Racing entry is third in the DPi standings with two races left.

“We had the speech today. I quoted the good old Kennedy speech about ‘we go to the moon not because it is easy but because it is hard.’ And we knew that coming in here today and Renger killed it. Sebastien hung in there. We were fighting a power steering issue the whole time. And it was awesome. These guys deserve it,” said Peter Baron, race strategist for the No. 01 Cadillac.

The No. 31 Whelen Engineering Cadillac DPi-V.R, co-driven by reigning DPi champion Pipo Derani and Olivier Pla, earned its fourth podium finish of the season. Derani finished just .732 of a second behind the second-place Acura.

Earl Bamber in the No. 02 Cadillac Accessories Cadillac DPi-V.R overcame a drive-thru penalty with 33 minutes left to finish fourth with co-driver Alex Lynn. They combined to lead 13 laps.

The No. 5 Mustang Sampling Cadillac DPi-V.R, which Tristan Vautier drove to the third qualifying position, was in the hunt in the final 10 minutes with Richard Westbrook behind the wheel but was overtaken by the charging Derani and Bamber. They led 25 laps early in the race employing an alternate fuel strategy.

Cadillac Racing teams next head to Road America in Wisconsin for the 2-hour, 40-minute race on the 4-mile, 14-turn road course Aug. 7, where the No. 31 Whelen Engineering Cadillac DPi-V.R is the defending winner. Reigning IMSA DPi champion Pipo Derani will be back behind the wheel of the No. 31 Action Express Racing entry along with co-driver Olivier Pla.

Cadillac Racing from the cockpit

Sebastien Bourdais: “I didn’t know what to expect; I had never been here. I really honestly struggled this weekend. It’s all on Renger. From the back to the front a couple of times, he was just impressive in traffic and made it work. Hats off.”

Renger van der Zande: “We are very happy with the win today and with the speed we displayed on-track. I knew getting through traffic cleanly would be key. We were able to pass in traffic there at the end and the team kept me informed on when it was coming. I’m very proud of the team at Chip Ganassi Racing. Big thanks to Chip, Mike Hull, Mike O’Gara, Cadillac and everyone involved. This is why we go racing.”

Pipo Derani: “I think considering the last few races we did a job to get ourselves back onto the podium. It’s very competitive out there and we needed a good result, we needed to be back on the podium. So happy for the No. 31 Whelen Engineering Cadillac group and hopefully we can improve from here.”

Olivier Pla: “It was a crazy race. I lost position at the start and thought I could make it up in traffic again. I had a good car and then handing it off to Pipo to fight for position I thought we would be position for a podium finish. It’s good to start like that and I’m sure we’ll win more.”

Alex Lynn: “Another P4 for the No. 02 Cadillac. Quite a bit more dramatic this time around. I think we had the fastest car and the fastest crew to win, but we didn’t and that’s racing.”

Earl Bamber: “Tough day for us finishing fourth. I think we definitely had a car to win, but the penalty set us back. Good job by the No. 01; it’s great to see Cadillac back in front. Now, we will keep fighting at Road America.”