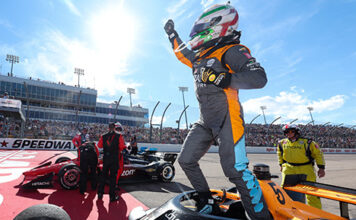 NEWTON, Iowa (Sunday, July 24, 2022) – Pato O’Ward won the Hy-Vee Salute to Farmers 300 presented by Google on Sunday at Iowa Speedway after dominant leader Josef Newgarden crashed out of the race with 65 laps remaining.

“We knew that we had a great car,” O’Ward said. “So, it was all about just capitalizing and being there when it counted. The guys did a great job calling when we had to pit. It was very, very enjoyable.”

O’Ward earned his second victory of the season – he also won May 1 on the road course at Barber Motorsports Park – and fourth win of his NTT INDYCAR SERIES career. The victory, coupled with his second-place finish Saturday in the HyVeeDeals.com 250 presented by DoorDash, helped O’Ward climb from sixth to fifth in the series standings. He is 36 points behind leader Ericsson.

“Hopefully we can win a couple more,” O’Ward said. “That would be fantastic. We’ve had a good year, but we’ve dumped two wins in the past couple of months. So, it’s definitely been a frustrating but rewarding few weeks. This is the perfect momentum we need.”

It looked like Team Penske might sweep the top two spots until Newgarden spun into the Turn 4 SAFER Barrier while leading on Lap 235 of 300 in the No. 2 Hitachi Team Penske Chevrolet. Newgarden, who won Saturday on the .894-mile oval, had led 148 of the first 234 laps and was 2.8384 seconds ahead of O’Ward before the stunning incident.

Newgarden was in cruise control before the crash, maintaining a steady gap to O’Ward. As he entered Turn 4 on the “Fastest Short Track on the Planet,” the left front wheel of his car lifted off the ground after an apparent mechanical problem in the rear of the car, sending Newgarden spinning into the SAFER Barrier. His car suffered heavy rear-end damage, but Newgarden walked away from the incident.

“It was a bit of a shock,” Newgarden said. “Man, I want to cry. So sad for my team. I don’t know what happened. It was a good run. I feel terrible for us. I don’t know; something went wrong there.”

Two-time series champion Newgarden was on track to lead the championship by 10 points when he crashed. Instead, he was credited with 24th place and is third in the standings, 34 points behind Ericsson.

After Newgarden’s unexpected exit from the race, O’Ward took the lead for good. The victory was secured when O’Ward, Power and the rest of the lead-lap drivers entered pit road for their final pit stops on Lap 239. O’Ward won the race off pit road and then deftly navigated lapped traffic over the closing 60 laps.

“The No. 5 Arrow McLaren SP guys in the pits were awesome,” O’Ward said. “That’s what gave us our win. Obviously, I did my job in the car to keep her safe and maintain.

“I knew we had the pace, but it’s just tough whenever you’re going through the traffic. The guys in front of me are handling it a different way than you do, so it’s just different every lap.”

O’Ward put himself into position to grab the unlikely victory by passing NTT P1 Award winner Power as Power turned his out lap after his second-to-last pit stop on Lap 195. O’Ward gained 2.953 seconds on Power during his in lap, stop and out lap for his penultimate stop on Lap 194.

O’Ward will split $10,000 with his team and his charity of choice for the victory as part of the PeopleReady Force for Good Challenge.

A busy July continues for the NTT INDYCAR SERIES with the Gallagher Grand Prix on Saturday, July 30 on the Indianapolis Motor Speedway road course. It’s the fourth race in three weekends. Live coverage starts at noon ET on NBC and the INDYCAR Radio Network.