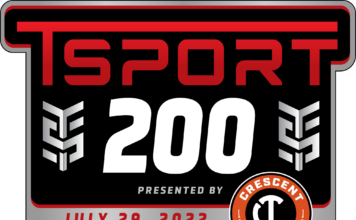 INDIANAPOLIS (July 29, 2022) – Ben Rhodes (second) led eight Toyota Tundras in the top-10 at the return to Indianapolis Raceway Park on Friday evening. Ty Majeski led a career-best 71 of the 200 laps, but a late caution ended the chances of his first career Truck Series win. Majeski came home in eighth.

How did you get back up to second?
“I don’t really know. We drove through the whole field tonight multiple times. I really hate that we had that penalty. I still don’t know what happened. I felt like I was holding my speed correctly. There are some really big bumps at the start finish line, which is the section that we got the penalty in – so I ‘m thinking maybe the bumps got me going faster that I thought I did or that the light showed, but we came up through the field multiple times and circumstances kind of worked out in Grant’s (Enfinger) favor those last two restarts. He certainly had a truck to win, but I think our Dan-O’s Toyota Tundra was a lot faster than his truck. It’s a shame because I wanted to win the TSPORT 200 for my race team. This is their big event, and I just couldn’t get it done. I just need a few more laps and I know we could have got this Toyota Tundra into victory lane.”

Ran up front all night and started the Playoffs with a good finish. How was your race?

“We made some big gains. We weren’t very good in practice. We put our heads together the 52 and 62 (Layne Riggs) teams and took some swings at it for time trials and were really good. I felt like we were almost good enough to win. We didn’t have a very good long run, but proud of our Halmar team. Proud of everybody at TRD. It’s great to start the Playoffs with a top-five. With that green-white-checkered deal and we pitted, I was like oh, man, this stinks, but we got back to where we were running pretty much, maybe plus one. It worked out for us. Proud of all of our guys. This is the best short track truck that we’ve ever had. I’m proud of these guys.”

Top-10 finish in your Truck Series debut. Congrats! How was your first Truck race?

“I’m just so thankful for Puryear Tank Lines, Infinity Communications, Halmar Racing. They gave me this opportunity to run this one-off race and I couldn’t be prouder. Today in qualifying, I hung it out trying to be a dirt racer. It bit me and I was down in the dumps about it. I was upset. I felt like I was out of the race. I got there on the start and then got messed up on pit road and lost a lap. I thought we were really over but did everything perfect after that. I made all of the track position that I could. I did all I could on pit road and made smart moves and got all of the way back up to seventh. It feels like a win to me in my first ever race. If you would have told me three hours ago, I would have finished seventh, I would have given you a hug.”

Stellar race, but not the result that you wanted. Can you talk about the finish from your perspective?

“Fired off struggling. Joe (Shear, Jr., crew chief) made a great change on that first stop. We gave up some track position on the pit stop to do it, and the thing just came alive. Really good truck, really good pit stop, that second stop. Won that stage. I was really just riding. I had a really, really good truck. I must have run something over. We had a right rear going down on that long run when Grant (Enfinger) got by me. Overall, really good Road Ranger Toyota Tundra TRD Pro. Had a chance to win, leading with 10 to go. That’s really all you can ask for. Obviously the yellow, well it probably saved us because we had a flat tire, but it mixes up the strategy and it just didn’t go our way.”

What were those conversations you were having with the 17 (Taylor Gray) team?

“Those were private, but it is what it is. I had a really fast Yahoo Toyota Tundra TRD Pro tonight. Sometimes you are the bug and sometimes you are the windshield. We were the bug tonight. I made a mistake early on and spun myself. Then, we had a restart there at the end on older tires -everyone had fresher tires – I tried driving down the bottom of (turn) three underneath the 17 (Taylor Gray) and it just kept sliding. I accidently got into his left rear – tried to stay off of him. That team has their opinion, I have my opinion. I’m sure we will talk at some point. The final restart I had a really good jump. I thought we were going to have a shot there and then we got run in the fence by the 38 (Zane Smith). That’s a couple of times that he has ran me in the fence. I’m taking notes. Solid points day for us. I don’t know where that puts us above the cut line, but we’ve got some really good tracks coming up for us. Proud of everyone at KBM (Kyle Busch Motorsports). Thank you to Yahoo, Toyota, TRD, everyone that gives me this opportunity. Let’s go win a championship.”