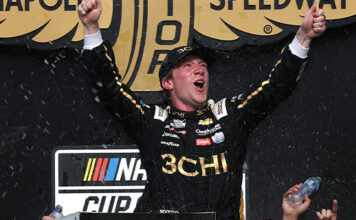 Reddick prevailed in overtime in the NASCAR Cup Series race on the 14-turn, 2.439-mile road course after starting from the pole in the No. 8 3CHI Chevrolet. It was the fourth career Cup Series victory at IMS for Richard Childress Racing, which won the Brickyard 400 on the oval with Dale Earnhardt in 1995, Kevin Harvick in 2003 and Paul Menard in 2011.

The win came with the backdrop that Reddick announced July 13 he is leaving RCR after the 2023 season to drive for 23XI Racing – co-owned by NBA legend Michael Jordan and Denny Hamlin – starting in the 2024 season.

This was Reddick’s second career Cup Series victory, both coming this month. He won the road race July 3 at Road America.

“Certainly, it was a little bump in the road, but we’ve gone out and won a race fair and square a couple weeks ago,” Reddick said of his announcement to leave RCR. “If we changed nothing and we keep working really, really hard, we’d find our way back to Victory Lane.

“Just really glad to be able to do it here in Indianapolis. This is one really special place to race. Really excited to kiss the bricks here in a little bit.”

Austin Cindric placed second in the No. 2 Discount Tire Ford, with Harrison Burton third in the No. 21 DEX Imaging Ford. Ross Chastain crossed the finish line second in the No. 1 Worldwide Express Chevrolet, but NASCAR penalized him for missing Turn 1 on the final restart and gaining track position by taking the access road past Turn 1. Chastain was credited with 27th place.

The two-lap overtime session was created when the caution flag flew on Lap 81 of the scheduled 82 laps. On a restart on Lap 80, multiple cars made contact in Turn 4, with the No. 3 BetMGM Chevrolet of Austin Dillon getting beached in the gravel trap.

Reddick, who took the lead for good on Lap 62 when the off-sequence Joey Hand pitted, led the field to the green-white-checkered overtime restart on Lap 85, followed by AJ Allmendinger, Ryan Blaney, Ross Chastain and Daniel Suarez.

The field fanned out four-wide on the final restart heading into Turn 1, with Chastain pinned against the outside wall. Chastain decided to avoid a collision and Turn 1, instead taking the access road that bypassed the corner. He rejoined the circuit next to leader Reddick, taking the lead in Turn 6.

“I was just trying not to be in the carnage there in Turn 1,” Chastain said. “I thought we were four-wide and couldn’t go any farther right, so I decided to take the NASCAR access lane out there. Just pure reaction there.”

Reddick then powered past Chastain to regain the lead in Turn 14 with the white flag in the air, with Chastain, Cindric and Burton never making another challenge for the lead. Reddick crossed the finish line .576 of a second ahead of Chastain before Chastain was demoted by the penalty. The official margin of victory between Reddick and Cindric was 1.065 seconds.

“I was like, ‘Uh-oh,’” Reddick said of Chastain passing for the lead. “That was a scenario that had been talked about. If you get bottled up, what do you do when you take the access road? I couldn’t believe he got ahead of me. I was waiting to see if he was going to have a penalty because I didn’t want to move him out of the way. I was really surprised by that, but hey, we made it work.

“Hats off to Ross for trying to do that, but I’m really glad it didn’t end up working out because I would have been pretty pissed off.”

Reddick led three times for 38 laps in a race slowed by cautions only for the end of Stage 1 and Stage 2 before the first incident-related caution on Lap 62. Teams attempted various tire strategies in the first half of the race to try and gain track position during a caution flag that never flew.

Indiana native Chase Briscoe won Stage 1 in the No. 14 HighPoint.com Ford before finishing 23rd. Christopher Bell won Stage 2 and looked to be a challenger to Chastain late in the race before his right front tire punctured and ripped bodywork from his No. 20 CRAFTSMAN Racing for a Miracle Toyota on Lap 78, triggering the penultimate caution period of the race.

The next event at IMS is the Driven2SaveLives BC39 presented by WeatherTech this Wednesday, Aug. 3 and Thursday, Aug. 4 at The Dirt Track at IMS. Tickets are available at IMS.com.