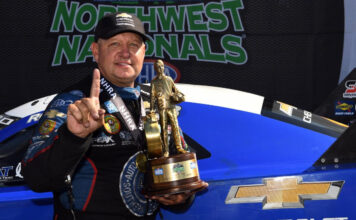 KENT, Wash. (July 31, 2022) — Whether it’s the 59th time on the winner’s stage or the first, thrusting a Wally to the sky is a satisfying and emotional moment.

Brittany Force almost made it a Chevrolet sweep for the second consecutive National Hot Rod Association (NHRA) Camping World Drag Racing Series visit to the racetrack near Seattle. Force, the No. 1 qualifier for the fifth time in 13 races, set the track speed record of 332.43 mph in the first round of eliminations and went on to record a runner-up finish in the Flav-R-Pac/Monster Energy Chevrolet dragster.

“I’m blown away that at this point in the year we already have six wins,” said Hight, the No. 5 qualifier in the Automobile Club of Southern California Chevrolet Camaro SS who matched his career best for wins in a season. “But coming up we have a Countdown, and if we don’t do equally as good in the back half we’re not going to win a championship. That’s the goal for this Auto Club Chevy team.”

Hight, who has advanced to the final round in eight of the 13 races, increased his points lead with his second victory on the Western Swing.

Hight clipped John Force’s bid for his record-extending 10th Funny Car victory at Pacific Raceways by winning the semifinal matchup. The teammates met in the semis two weeks earlier at Denver, with Hight prevailing and going on to the event victory. Force, the No. 3 qualifier in the PEAK/BlueDEF Platinum Camaro SS, remains fourth in the standings.

Coughlin, who had posted eight victories in Super Gas, Super Comp and Top Alcohol dragster competition, earned his initial Pro Stock win by defeating points leader Erica Enders by .0001 of a second in the final.

“It’s something else. I’ve watched my uncle Jeg win a ton of these races in the class of Pro Stock. My dad has won five or six. The monkey is off your back, but you want to keep going,” said Coughlin, who advanced to his fourth career final in the JEGS.com Camaro SS.

Enders, driving the Melling Performance Camaro SS, beat Elite Motorsports teammate Aaron Stanfield, driving the Janac Brothers Camaro SS, and Coughlin defeated Greg Anderson, the No. 1 qualifier for the 119th time in his career, in the semifinals. Anderson, driver of the HendrickCars.com Camaro SS, is seeking career win No. 100.

Brittany Force extended her Top Fuel points lead with her fifth final-round appearance of the season. She was the No. 1 qualifier in two of the three races on the Swing and won at Sonoma.

“We had an awesome weekend. We qualified No. 1 and had a final round appearance. We stayed in the points lead, and that’s the most important thing. We’ll head to Topeka next,” she said.

Austin Prock, who earned his first Top Fuel victory at Pacific Raceways in 2019, was the No. 10 qualifier in the Montana Brand/Rocky Mountain Twist Chevrolet dragster. He fell in the first round.

Chevrolet teams have a brief respite after three consecutive weeks of racing before the Menards NHRA Nationals on Aug. 12-14 at Heartland Motorsports Park in Topeka, Kansas.

THESE MOMENTS OF PERSEVERANCE. HOW MUCH SWEETER DOES IT MAKE IT?

“It’s unbelievable. To have six wins at this point in the year, I am blown away. Today, to have low ET every single round, I’m so proud of my guys.”

YOU KNOW HOW BAD JR TODD WANTED THAT AND HOW GOOD THEY ARE.

“It’s good to see JR’s car running good. He’s a great driver and good guy. Except for one little hiccup we had in Sonoma in the semifinals, we came really close to getting another final and sweeping this Western Swing. That’s really what this team wanted to do. I’m blown away that at this point in the year we already have six wins. But coming up we have a Countdown and if we don’t do equally as good in the back half, we’re not going to win a championship. That’s the goal for this Auto Club Chevy team. It’s amazing the caliber of drivers, former champions, none of these rounds get any easier. Up until a couple of races ago, this Auto Club Chevy we didn’t have a hot weather setup. We were good when the conditions were good. But Jimmy (Prock) and Chris (Cunningham) and the whole team have pulled together, and we had low ET every round today. All these teams out here today earned their keep working in his heat. We appreciate all the fans sticking it out in the heat. It’s so good to be back in Seattle.”

YOU’RE NOT TAKING THE NEXT WEEKEND OFF. YOU’RE GOING TO NORWALK TO PUT ON A SHOW AND HAVING A CHANCE TO LEARN.

“Without a doubt. We’re going to make the most of it next Saturday at the Night Under Fire in Norwalk (Ohio); one of the greatest shows in the country. We’re going to make some runs during the day for testing and then try to win another race. We treat that just like an NHRA race. We get a couple of days off and then we’re back at it at Topeka, so no rest for the wicked.”

YOU’VE TIED YOUR ALL-TIME HIGH FOR RACE WINS AND STILL HAVE NINE RACES TO GO.

“There are a lot of great cars out here. Last time we were here, John (Force) and Austin (Prock) both won and I think we lost early. I was really hoping we were going to get a double up with Brittany (Force). I thought that that car was going to get it.”

WINNING YOUR FIRST PRO STOCK WALLY. WHAT DOES IT MEAN TO YOU?

“It’s something else. I’ve watched my uncle Jeg win a ton of these races in the class of Pro Stock. My dad has won five or six. The monkey is off your back, but you want to keep going.”

YOU’VE BEEN SUCCESSFUL IN SPORTSMAN CLASSES. NOW YOU CAN ADD PRO STOCK TO YOUR RESUME.

FINAL ROUND, YOU KNOW ERICA HAS THE BEST CAR OUT HERE. DO YOU LOOK OVER OR DO YOU THINK I THINNK I’VE GOT HER?

“The margin of victory was triple zero one, so I don’t think I could have made that decision. I was just trying to get there.”

RANK THIS ONE WITH ALL THE OTHERS.

“This one you can’t even rank it’s so special. We come out here to Seattle, it’s a wonderful place to race, the fans are amazing. It’s great to be back here. I’ll never forget this. The flight home is going to be sweet.”

BRITTANY FORCE, JOHN FORCE RACING, FLAV-R-PAC/MONSTER ENERGY CHEVOLET DRAGSTER: “It was a great weekend for this Flav-R-Pac team running at the first-ever Flav-R-Pac Northwest Nationals. I’m very proud to be teamed with a company like Flav-R-Pac. I was excited to see their colors painted all over the drag strip this weekend. “We had an awesome weekend. We qualified No. 1 and had a final round appearance. We stayed in the points lead, and that’s the most important thing. We’ll head to Topeka next.”

AUSTIN PROCK, JOHN FORCE RACING, MONTANA BRAND/ROCKY MOUNTAIN TWIST CHEVROLET DRAGSTER: “This Montana Brand / Rocky Mountain Twist team got beat in a close race today. We made a bunch of ground this weekend, though, just came up short in the first round. It wasn’t the Western Swing we anticipated but I know we’re moving forward. We’ve got a week to polish this hotrod up and come out swinging in Topeka.”

JOHN FORCE, JOHN FORCE RACING, PEAK/BLUEDEF PLATINUM CHEVROLET CAMARO SS: “Good weekend for this PEAK Chevy. We got to running well, had to do some driving but we got the job done, went some rounds. Really good weekend for Frank Tiegs with Flav-R-Pac, his car went No.1 and made it to the finals, they’re running well and I think everyone was expecting them to win it. In the points lead with plenty of races left to get the job done but Robert got it done today with that Auto Club team. Austin was looking good over there with Montana Brand too.”

GREG ANDERSON, KB RACING, HENDRICKCARS.COM CHEVROLET CAMARO SS: “There were a lot of positives this weekend, no question. We definitely picked up our performance, we got ourselves back in the fight with the HendrickCars.com Chevrolet, and now we can contend for wins again. That’s a huge positive.”

Official Release
Previous articleBuescher Storms Back for Top-10 after Fiery Start in Indy
Next articleStewart-Haas Racing: Verizon 200 at the Brickyard