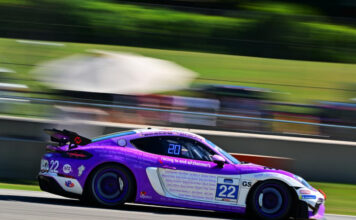 Galante and McAlister Joined by Capestro-Dubets in the No. 22 Racing to End Alzheimer’s Porsche Cayman, with Gibbons, Owen and DeBoer Driving No. 9 Valkyrie Intelligence/Phoenix Global Health Porsche Cayman in Four Hour Race

Saturday, August 6’s race can be seen live on Peacock, NBC’s streaming platform, from 3:15 p.m. to 7:15 p.m. EDT and delayed for cable and satellite subscribers on USA Network in a two-hour show on Saturday, August 13 at 3 p.m. EDT.

Road America is the first time that Hardpoint has run two cars concurrently in Michelin Pilot Challenge. The team will accomplish the feat by augmenting it’s regular Porsche Cayman team with crew members from the No. 99 Porsche 911 GT3 R program. The team will service both cars with the same over-the-wall crew during in-race pit stops.

Though the Michelin Pilot Challenge season opener at Daytona was a four-hour race, Hardpoint’s GS program began at Sebring for round two.

Capestro-Dubets joins the No. 22 Racing to End Alzheimer’s Porsche program for the first time but brings familiarity with the Cayman. JCD, as he is affectionately known, was on pole in a similar Porsche Cayman in the last race at Lime Rock Park.

Galante was the race winner in the ST class of the championship during his title-winning 2018 season at Road America.

With the addition of JCD, McAlister will likely qualify the No. 22 Porsche and open the race, with Galante taking the middle stint. That’s a reversal of fortunes for the team this season, as Galante has previously qualified and started each race.

Gibbons and Owen, along with the No. 9 Porsche Cayman, make their IMSA debuts this weekend. Along with DeBoer, they will compete both overall in the GS class and for a win in the Bronze Cup. The Bronze Cup is open to cars with a full driver line-up of Bronze-rated drivers.

Both have teamed together this season in SRO GT4 Americas, driving the same Porsche Cayman. Prep to turn the car to IMSA specifications included fresh Michelin Tires, setup changes and electronics swaps, as well as other smaller regulation adjustments like fuel cell capacity.

DeBoer has IMSA experience as well, but has also competed this season in a Cayman in GT4 Americas. DeBoer and Gibbons have been teammates in the past.

DeBoer and his family have chronicled his racing exploits, along with their family life, at Fastlife.tv and on Amazon Prime. The show is an all-access pass for viewers to the DeBoer’s dream chasing journey and a look inside their ups, downs, challenges, and achievements.

The Racing to End Alzheimer’s program continues to push toward its goal of 222 names place on the race car by season’s end. A $250 donation, which is matched by Legisitics, Inc., allows fans to place the name of a loved one who has been touched by the cruel disease on the race car for the remainder of the season. Currently, nearly 150 names are on the car, with a late push to up that count for the final two races of the season.

The first practice session of the weekend was an hour-long effort on Thursday afternoon. The team used the session for each of the new drivers to get a feel for the car and the track in a Michelin Pilot Challenge session.

Hardpoint’s No. 99 GridRival Porsche 911 GT3 R will not be participating in this weekend’s WeatherTech Championship race despite previous plans to do so. The team’s transporter caught fire during its return from the race at Watkins Glen, causing water and smoke damage to the property inside. If replacement parts can be found, Hardpoint will rebuild the car and participate in its home race at Virginia International Raceway and the season finale at Michelin Raceway Road Atlanta.

Nick Galante, Driver, No.22 Porsche Cayman: “Road America is really everything you want a racetrack to be. It’s fast, it’s long, it’s got hard braking zones, there are opportunities to pass, the fans will be rowdy and ready to party. Our key is going to be staying focused and minimizing mistakes. If everyone can do that, we’ll be in good shape. I’m excited to have my old friend JCD join Sean and I. We’re due for a good result, not just for us but for all of the fans and loved ones that ride with us on the Racing to End Alzheimer’s Porsche. We’d like to carry them over to the podium at the end of the race on Saturday.”

Sean McAlister, Driver, No. 22 Porsche Cayman: “I love racing at Road America. It’s a track I’ve been to almost every year since I’ve been racing. Having an extra teammate will be great to get a new perspective on things, but it will cut our time in practice down a bit so we’ll need to have a good plan to maximize as much track time as possible. This race is longer than the ones we have had this season, which I think will play to our advantage.”

John Capestro-Dubets, Driver, No. 22 Porsche Cayman: “Road America is not only one of my favorite tracks but the area in general is on my favorites list. This place is special and the racing culture is deeply rooted in the little town of Elkhart. Racing here just makes you think about all the great drivers that shared this track for so many years. This place is high speed, high commitment and it breeds some of the best racing in North America. It’s a new team and new co-drivers, yes, but the same strategy for me this weekend. We need to check the basic boxes as drivers – hit our marks, make sure we do our job not only on track but as well as having buttoned up driver changes. Consistency is definitely the key to these races. So my focus is there over raw pace this weekend but I’m always looking to bring my best drive yet. I’ve been a friend to Nick for quite some years and to finally share a car with him and Sean in this setting is definitely something I’m really looking forward to.”

Derek DeBoer, Driver, No. 9 Porsche Cayman: “I’m really looking forward to getting my feet back into the IMSA paddock. It’s been awhile but I’ve had some great experiences there. I’m also excited to be reunited with Sean Gibbons, a great teammate from the past and current competitor, as well as Sam Owen. It couldn’t be a more perfect recipe, joining them in a familiar car and at one of my very favorite tracks. My first professional win came at Road America so it will always have a special spot in my heart! BRM Chronographs played a large part in this coming together for me so I’m very grateful for that while Brooke and I also look forward to sharing her children’s book, Fastlife – Lets Go Racing, with a new audience. We feel that during this time in our country, the message of chasing your dreams is particularly important. The youth are our future and we strive to support their dreams!”

Sam Owen, Driver, No. 9 Porsche Cayman: “I couldn’t be more excited to make my IMSA debut with my teammate Sean Gibbons and friend Derek DeBoer at one of my favorite tracks. Our goal is the Bronze Cup this weekend and seeing how we stack up with this field, but we know that the challenges are going to be big. Working with Rob and his Hardpoint team has been exceptional and we feel confident headed into the weekend with them in our corner.”

Sean Gibbons, Driver, No. 9 Porsche Cayman: “I’m looking forward to making my IMSA debut this week especially with my friend, regular co-driver and business partner Sam Owen, and Derek DeBoer who was part of my first win in sports car racing. Rob Ferriol and the whole team at Hardpoint have been amazing to work with. We’re really looking forward to testing ourselves here at Road America.”