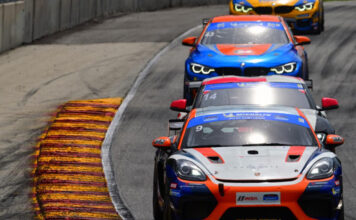 Galante, McAlister and Capestro-Dubets Ran With the Leaders for the Four-Hour Race, with Owen, Gibbons and DeBoer Leading Bronze Cup Before Early End to the Day

ELKHART LAKE, Wisconsin (August 7, 2022) – Hardpoint was in the mix for the four-hour IMSA Michelin Pilot Challenge race at Road America on Saturday afternoon, with the No. 22 Racing to End Alzheimer’s Porsche 718 Cayman GT4 RS Clubsport ultimately finishing ninth while the No. 9 Valkyrie Intelligence/Phoenix Global Health Porsche Cayman leading the Bronze Cup before an early end to its day.

Nick Galante, Sean McAlister and John Capestro-Dubets combined for the ninth-place finish in the No. 22 Racing to End Alzheimer’s Porsche. Sam Owen, Sean Gibbons and Derek DeBoer drove the No. 9 machine in a Hardpoint partnership with OGH Motorsports.

Owen qualified and began the race for the OGH Motorsports program 17th overall in the GS class and second in the Bronze Cup subclass for cars with a full line-up of Bronze-rated drivers. McAllister started the No. 22 car 12th overall and in class.

Owen took the lead in the Bronze Cup under yellow with a fuel-only stop for both Hardpoint cars. Unfortunate contact with a barrier just past the 35-minute mark ended the day for the No. 9 Porsche Cayman, with Owen treated and released from the track medical center.

As the opening driver in the No. 22 Porsche Cayman, McAlister held serve from his starting position before passing the car over to Galante following a 65-minute stint.

Galante again held his position through the ebb and flow of a variety of fuel strategies and lengthy full-course caution periods.

With two hours to go and Capestro-Dubets in the car, the team found themselves in the mix. Despite running on old tires, Capestro-Dubets was holding tight in fifth position with a line of established drivers behind him. He was squeezed off the track to drop four positions, but immediately came to pit lane for fresh tires and a full tank of fuel with just over 90 minutes to go.

The No. 22 Racing to End Alzheimer’s Porsche cycled back to the lead battle and climbed as high as second before diving to pit lane with 50 minutes remaining in the race for enough fuel and a fresh set of Michelin tires to get to the finish.

A final lengthy full course caution squeezed the pack together with under 15 minutes remaining, with Capestro-Dubets finishing in a solid ninth place. That possibly cost a few positions, as others near the top would have had to pit for fuel without the slower safety laps.

Hardpoint returns to action with IMSA Michelin Pilot Challenge and the WeatherTech SportsCar Championship No. 99 GridRival Porsche 911 GT3 R at their home race of Virginia International Raceway, August 26-28. Hardpoint’s shop is located in the Motorsports Technology Park on the grounds of VIR.

Nick Galante, Driver, No.22 Porsche Cayman: “People rising to the occasion was exactly what happened this weekend. The whole team dug in, the pit stops were great, Hardpoint was awesome, the engineer side was awesome and working with JCD really helped in our car development. Having the courage to try something new with the setup and have it work out was just great. The confidence Sean is showing, he did an amazing job in qualifying with all the heavy hitters out there for the four-hour race. The car is filling up, we’re getting close to our goal of 222 names on the car. Everyone is coming through, and that’s what Team Hardpoint does.

Sean McAlister, Driver, No. 22 Porsche Cayman: “It was a great weekend. We moved up three positions throughout the race. The car felt much better than it’s ever felt, so that was a big bonus. We were able to execute a good plan to move up a couple of positions. We got caught out by some yellows at the end that probably cost us a couple more spots because people didn’t have to pit again. Some people got lucky and we didn’t but it was a great weekend.”

John Capestro-Dubets, Driver, No. 22 Porsche Cayman: “It’s an absolute honor to drive for a cause like Racing to End Alzheimer’s and be in a family of such good people and unity. We all came together this weekend and made some big changes to the car and we saw the reward in the times. That last stint, we caught the yellow and we knew we were running out of tire on the front axle. I gave it my all and we lost one spot on the restart but we were able to get it home without anything else happening, which was a win. It was a hard fought battle that whole two hours and 20 minutes for me.”

Derek DeBoer, Driver, No. 9 Porsche Cayman: “it wasn’t the ending that we wanted, of course. The 22 car had a nice top-10 finish, but our No. 9 was running first in class when Sam had his incident. Most importantly, he’s back at home, he’s ok. It’s a testament to how safe these Porsches are. We’ll come back fighting the next time.”