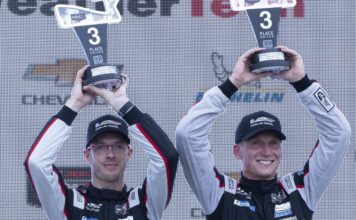 Alex Lynn and Earl Bamber co-drove the No. 02 Cadillac Accessories Cadillac DPi-V.R to a runner-up finish – its fourth podium of the season – after starting second. The No. 01 V-Performance Academy Cadillac DPi-V.R co-driven by Sebastien Bourdais and Renger van der Zande earned its fourth consecutive podium, which includes two victories, with a third-place finish.﻿

The ninth race of the IMSA WeatherTech SportsCar Championship season included mixed weather conditions that played with strategy and tire choices on the 4.048-mile natural-terrain road course, four full-course cautions and hard racing late between the No. 01 V-Performance Academy Cadillac DPi-V.R and the No. 5 Mustang Sampling Racing Cadillac DPi-V.R that benefitted Bamber in the end as the race ended under caution.

“That was a mixed race and pretty difficult up and down the whole way,” said Bamber, who drove around both Cadillac DPi-V.Rs that went wide while braking in the Kink. “We had the pace and had the fuel to do it at the end. It’s just a shame we didn’t get all the laps.”

The pole-sitting No. 10 Acura won the race.

In 2021, Cadillac Racing locked up its third Manufacturer Championship since 2017 while the No. 31 Whelen Engineering Cadillac DPi-V.R earned the Team and Driver championships with a runner-up finish at the racecourse in Georgia.

Cadillac Racing from the cockpit

Earl Bamber: “That was a mixed race and pretty difficult up and down the whole way. We were at the front; we were at the back. Tire choice was difficult. The last stop we went to the back and were just trying to make our way forward. The 01 got together with the 5 and we went to third and we were racing the 60 when it went in narrow (in the Carousel) and went off. We had the pace and had the fuel to do it at the end. It’s just a shame we didn’t get all the laps. I think it’s a really good podium. It shows we have a really good car and pace. It’s so close in this championship, a little bit of strategy, a little bit of track position and you win.”

Alex Lynn: “Crazy race with the weather, starting on slicks, then going to the wets and back again. Difficult one, but a good one for the fans. Happy with second.”

Renger van der Zande: “We all race hard in IMSA. I wanted to win this one really bad, so I gave it all. We made one mistake on the class split – the last one – and that was the important one, so we lost (position) to the 5 car. I got behind him; that’s out own mistake. Then I had to just barge through to get by. He braked on the wet and we stayed wide and lost a position. It’s another podium, so we should be happy with that.”

Sebastien Bourdais: “I had to make up for my mistake yesterday. It’s shame that we can’t put ourselves back in the championship mix. We were behind the 10 car and the rain started to fall, and at that point the team made the call to stay on slicks with the information they had. Unfortunately, the 5 car was on wets, so we lost track position there. From there, the race kind of unfolded in a bit of a weird way. We gave ourselves a chance, though we didn’t quite execute everything strategy-wise. We’ll just keep digging and try to win Petit.”

Richard Westbrook: “We’re obviously disappointed with the result. We showed again that we can fly at the front and made some great calls, particularly tire-wise, and had good pace in the wet. The car was awesome. The yellows didn’t help us. We had a nice, healthy lead and it wasn’t to be. Tristan did a great job keeping everyone behind him, but then we got stuck in the pit stop and went down to fifth. Tough day, but it was good for bits and pieces.”

Tristan Vautier: “We were in the fight for a podium with Renger (van der Zande) and it was a tough battle. Eventually, he got a run on me when I got behind a GT entering the Kink. We raced really hard, knowing it was for a podium spot. He squeezed me quite hard on the inside to brake on the damp side of the track and we both broke really late and that got us off-line and allowed the 02 to go through. No regrets. The team worked really hard and had a great strategy. We gave it a fight; it just didn’t play out our way today. It was good to be in the lead in mixed conditions. We showed as a team that we could be in the lead and manage it. It was good to be at the front, but only the result counts. We have to move forward to the next one because this one hurts.”

Olivier Pla: “From the beginning of my stint there was a drizzle all the time. Overall, we were missing speed this weekend for some reason. We were expecting much more and Pipo and I are not happy. We need keep our heads down, keep working going to Petit Le Mans. I think it’s going to be a good place for us.”

Pipo Derani: “It wasn’t an easy race. Unfortunately, we were caught up in all sorts of situations. Unlucky in most of them. Eventually, when we were going to be really close to the other DPis on the restart, a P3 moves and I had to take avoiding action hitting the board. So, just before the restart I had to come in and clear the board that was stuck to the front of the car. Difficult race for us. Never really getting a break to try something. It’s been a difficult season, so we’re going to regroup and we have one more chance to finish on a high. Despite a difficult season we never give up and see if we can have a good race next time around.”