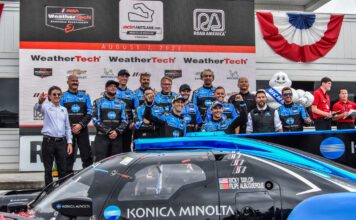 Elkhart Lake, Wis. (August 7, 2022) — Having eluded the team for 17 years, the No. 10 Konica Minolta Acura ARX-05 team won at Road America for the first time and retook the 2022 IMSA WeatherTech SportsCar Championship lead in dramatic fashion. The team now has a 19-point lead in hand over its sister car and season-long rival, the No. 60 MSR Acura DPi. Next up, the series heads to MOTUL Petit Le Mans, the season finale and final endurance race of the year.

Filipe Albuquerque started the race from pole position after yesterday’s impressive qualifying run. He built a one-second gap over the first few laps and maintained it as rain began to sprinkle and track conditions steadily worsened.

Ricky Taylor assumed his position behind the wheel under yellow with two hours remaining. As the clock ticked below the two-hour mark, unpredictable weather began to define the day. Initially expected to pass quickly, the rain intensified over the course of the caution period and Taylor fell two positions at the restart. He did well to manage a challenging situation, navigating a wet circuit on slick tires before he pitted for wets 20 minutes later. Another 20 minutes passed, and the entire field dove back down pit lane for slicks once more.

In the ensuing pit stop, the team opted to put Filipe Albuquerque back in the car, and he emerged in fourth place. Albuquerque made an electric move into Turn 1 shortly after, taking third place away from the No. 10 Konica Minolta team’s championship rivals.

The No. 60 Acura jumped the No. 10 in the pits during the final round of stops, and another long yellow set up a 35-minute sprint to the finish. Albuquerque, free to push to the maximum, made a brilliant move out of Turn 7 with two wheels on the grass to get by the No. 60 again. This time, the pass was for the lead, and with 23 minutes to go, Filipe never looked back.

With eight minutes remaining, an unfortunate incident amongst traffic for the trailing car ensured the victory for Albuquerque and the No. 10 Konica Minolta Acura ARX-05. The race finished under caution, setting up a thrilling finale come October.

“My job was to survive the conditions during my stint today,” said Ricky Taylor. “We were looking on for an Acura 1-2 towards the end which would have been great and the strategy seemed strong. It’s the first win for the No. 10 Konica Minolta Acura ARX-05 at Road America. Finally, crew member Bill Mullen got a win after 36 years of coming here, so congratulations to him. On top of everything, that feels the best—Bill Mullen got his win. I can’t say enough about Filipe’s drive.”

“What a crazy race,” said Filipe Albuquerque. “We started in first place and we led the first stint, and then the drizzle came. Ricky had a really tough time with a slick track and new, cold, slick tires. He did a hell of a job keeping the car on the track. We were almost last and were nearly lapped by the guys that took a gamble on rain tires, which was the right choice. At that point, our championship was completely over, but the beauty of IMSA and endurance racing is exactly this: it can shuffle unpredictably. I went back in the car even though I would’ve trusted Ricky to go to the end. I had driven in qualifying, so I was confident, and it was dry again. We pushed again—maximum attack—dragging the championship fight to the last race. It came off perfectly for us. Another win, our fourth of the season is just brilliant. We set the goal to win. So far, so good.”

“I’m extremely happy,” said team owner Wayne Taylor. “We came in behind in the championship and now lead the championship heading into the final round. It’s still going to be a race. 19 points is not enough to clinch it. To have four wins makes it a great year. Everybody has done a great job. Filipe was outstanding today and both he and Ricky are so selfless. I’ve never seen two teammates that close. Now, I can relax again.”