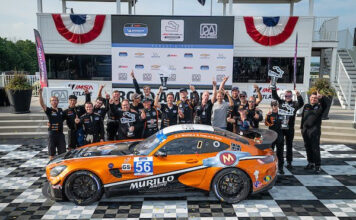 The triple-sweep marked the first time Mercedes-AMG Motorsport customer teams won every race entered on an IMSA race weekend since the Mercedes-AMG GT4 program was introduced in North America in 2018, joining the GT3 program that debuted in 2017.

Winward’s victory was the crowning moment of a strong showing on Sunday that saw all three Mercedes-AMG GT3 teams step up to lead the GTD class at various points in the two-hour and 40-minute race that was run in mixed wet and dry conditions. In total, the No. 79 WeatherTech Racing Proton USA and the No. 32 Team Korthoff Motorsports Mercedes-AMG GT3 teams joined Winward in leading a combined 39 of the race’s 60 laps.

Winward’s 15 tours up front were the final laps of the race with Ellis at the wheel. The team made the call to gamble on fuel and keep him on track instead of pitting with WeatherTech, Korthoff and several other top contenders with 40 minutes to go.

Ellis ran as competitively as he could while trying to save fuel and protect the lead, but a caution period with just under 10 minutes to go took away any concerns. After taking the white flag leading only to lose the last two IMSA WeatherTech championship points races heading into Road America, Winward’s luck turned for the good on Sunday. The fuel gamble paid off and Ellis took the checkered flag under caution for his, Ward’s and Winward’s first IMSA GT Daytona (GTD) victory since the 2021 Rolex 24 At Daytona.

The No. 79 WeatherTech entry of Cooper MacNeil and Daniel Juncadella stepped up as the fastest GTD car in the race but needed some of the same luck that had finally come to Winward. Juncadella charged through the field to lead 17 laps at mid-race, but the No. 79 was later assessed a penalty for running a red light at pit exit after the team’s final stop. Juncadella continued a lap down after serving the infraction and ultimately took the checkered flag in 11th place.

The late caution period that sealed Winward’s victory didn’t work for the strategy followed by the No. 32 Korthoff team and GTD championship leader Stevan McAleer and his co-driver Mike Skeen. After the final pit stop, Skeen cycled back into the race behind Winward and the other teams that opted to stay out and never had a chance to move up in the order before the race-ending caution came out.

Skeen crossed the finish line in eighth place, but McAleer and Team Korthoff still hold the GTD-class championship lead with just two races remaining on the 2022 schedule. Unofficially, McAleer and the No. 32 team have 2,329 points, 36 points clear of the second-place team and drivers.

Coming into Road America second in the championship standings, Foss and the No. 56 Murillo team narrowed the gap to the GS championship leaders by 70 points with their series-leading third win of the season.

Koch was in his final race substituting for regular No. 56 team driver Jeff Mosing who is scheduled to return to the cockpit in the next race at VIRginia International Raceway (VIR). Mosing has spent the majority of the summer recovering from rib injuries sustained in a fall while docking his boat this past spring.

Making the most of his final opportunity in the No. 56, Koch muscled his way into the lead after a late-race restart with three laps to go. He crossed the finish line with a .896 of a second margin of victory for his second win of the season co-driving with Foss. They first won at Mid-Ohio in May while Foss partnered with Marc Miller two races later at Canadian Tire Motorsport Park for the No. 56 team’s other win of the season.

Capstone and co-drivers Gary Ferrera and Kris Wilson extended their comfortable lead in the Bronze Cup standings with its sixth win in the year’s first eight rounds despite a challenging race that saw the team get caught up in more than one contact and near-miss incident.

Saturday’s Pilot Challenge race also saw another strong showing by the No. 55 FCP Euro by Ricca Autosport Mercedes-AMG GT4 co-driven by Skeen and Trevor Andrusko. The team has finished in the top-five in the last three races despite a limited competition schedule this season. A fifth-place Saturday at Road America follows another fifth at Watkins Glen in June and a season-best fourth at Lime Rock Park last month.

Next up for Mercedes-AMG Motorsport customer teams in IMSA competition is the race weekend at VIR, August 26 – 28.

Russell Ward, Driver – No. 57 Winward Racing Mercedes-AMG GT3: “This track suits the Mercedes-AMG GT3 really well as I have been saying, so I just needed to keep it a good clean race, hand it over to Philip and he would get us there. Definitely, without that late yellow, we wouldn’t have been able to finish the race, but this is the kind of luck we have been missing all year. It was good to finally get it and bring home the win. Our team is just amazing. It is one of the toughest seasons we have had in memory, but the performance has always been there. It’s worse when you have to chase that instead of just chasing the luck. I am just super excited for the crew.”

Philip Ellis, Driver – No. 57 Winward Racing Mercedes-AMG GT3: “I think without the last safety car it would have been too close on fuel. We kind of gambled a little bit but that’s what saved us the win today. It feels great. We have always been there, especially in the second half of the season, and now finally nothing happened to us, which is very nice. We were communicating on the radio and said we would not celebrate under the safety car. We would celebrate at the line, and that’s what we did. Now we will celebrate a little more tonight.”

Cooper MacNeil, Driver – No. 79 WeatherTech Racing Proton USA Mercedes-AMG GT3: “Wow! What an up and down race. My stint started great with a dry track and then the rain came. I was on slicks, and it was raining, but I was able to get to pit lane in one piece. Dani got in and made an incredible charge to the front of the field to lead the race. On the pit exit the light was red but he ran through it resulting in a stop plus 60-second penalty. I don’t believe we would have finished better than maybe fifth without the penalty due to other teams stretching their fuel mileage to the end. On to VIR.”

Daniel Juncadella, Driver – No. 79 WeatherTech Racing Proton USA Mercedes-AMG GT3: “It was a shame. Going from last to first in the wet was a lot of fun. Then in the dry the car was good. We were in the lead, and I was pretty comfortable. We took the safe strategy which was to pit. Ultimately, that wasn’t going to be the winning strategy. I also got a penalty for exiting the pits under red which was a shame. Racing in so many championships, I wasn’t paying attention to the light. The WeatherTech Racing Mercedes-AMG GT3 was good, and it is a lot of fun to race here at Road America.”

Eric Foss, Driver – No. 56 Murillo Racing Mercedes-AMG GT4: “I am just super thankful for this opportunity. I have been racing with Jeff Mosing for eight years and it is going to be great to have him back for the next race in Virginia. When he had to sit out the majority of the races this year because of his injury, he asked me who I would really want with me in the car. I told him Kenton Koch. We made it happen and it has been a blast racing with him. Our Mercedes-AMG GT4 has just been phenomenal. We have used it since the beginning of the program in North America in 2018 when we moved up to GS. Most teams have jumped around to other manufacturers, but we have stuck with the Mercedes-AMG GT4 because we just know it is such a great platform. It rewards us every time we execute well.”

Kenton Koch, Driver – No. 56 Murillo Racing Mercedes-AMG GT4: “To call this a dream summer is an understatement. To have a result like this with Eric and Murillo Racing and close out my time here with a finish like that is incredible. You can’t ask for more than that, and this goes down in history as the best race I have ever done. It felt really good. During the yellow before the race restart, I was giving myself a little pep-talk. I was like ‘you are not going to fold; you’re not going to fold. You are going to be the guy who goes for it’ and I went for it. I was so happy to help bring this awesome program another win.”

Gary Ferrera, Driver – No. 11 Capstone Motorsports Mercedes-AMG GT4: “Every time I get in the car, my only thought is getting it to Kris clean. I am always going to drive as hard as can, but this was the first time I wondered if I was going to survive to get the car to Kris. All of the crashes, and the only thing that saved me from a big wreck in the Kink was that a car in front of me braked, I just saw it through all of the dirt, but you really couldn’t see anything. We really had a lot of luck.”

Kris Wilson, Driver – No. 11 Capstone Motorsports Mercedes-AMG GT4: “I truly thought we were snake bit early in the race, but we ended up with almost a top-10 overall in P11. But early on, Gary had a crash in front of him, hit a car and lost a splitter, then he spun in the Carousel to avoid another car and also got hit by a TCR car. But we still got a P11 again and we will keep trying to crack the top-10.”

Trevor Andrusko, Driver – No. 55 FCP Euro by Ricca Autosport Mercedes-AMG GT4: “I think this year has gone very well, especially the last three races. We have kind of shown that we can show up and compete against these guys that are running a full season. Had we committed to a full season, I think we would have been in a very solid championship position right now. What’s interesting about Road America, and everything leading up to this weekend, is that we seem to show up a little off pace to begin with. Then we chase a lot, and when it comes time to qualify, we are right there where we should be in the top five. Awesome race, really excited for these guys and had a blast. I am really looking forward to Road Atlanta, in front of my home crowd at my home track and I have thousands of laps there.”