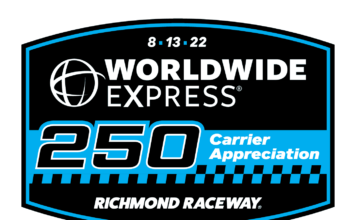 Chandler Chatter:
Chandler Smith and the No. 18 Charge Me team head to Richmond Raceway for the second race in the Round of 10 of the NASCAR Camping World Truck Series playoffs Saturday. In the opening race of the playoffs, Smith qualified second and finished second in Stage One at Lucas Oil Indianapolis Raceway Park, but saw his race take a turn for the worse in the closing laps of Stage Two when Zane Smith got loose underneath him while attempting to make a pass for third place. The No. 18 Tundra TRD Pro sustained significant damage after getting slammed into the wall and would limp home to an 18th-place finish. Smith, who entered the playoffs second on the grid, slid down into a tie for fifth with his KBM teammate John Hunter Nemechek, but did see his margin above the cutoff line increase from 20 to 24 despite the incident.

The 20-year-old driver will be making his third Truck Series start at Richmond. He led 24 laps and finished fourth in last year’s race at the 0.75-mile D-shaped oval after finishing 12th in 2020.

The Toyota Racing Development product has produced two wins, seven top-five and 11 top-10 finishes across 17 Truck Series starts this season. He won the second race of the season at Las Vegas (Nev.) Motor Speedway and was victorious again in the regular season finale at Pocono (Pa.) Raceway. Smith has already eclipsed the number of top-five and to-10 finishes he recorded in his rookie campaign. He ranks first among Truck Series regulars in laps completed (2219) and quality passes (571), second in average finish (9.3) and third in driver rating (100.4) and average running position (9.132).

Smith made the playoffs last year in his first full-time campaign as the 10th seed. He advanced to the Round of 8 with a must-win victory at Bristol (Tenn.) Motor Speedway in the final race in the Round of 10. He found himself in another must-win situation in the final race in the Round of 8 at Martinsville (Va.) Speedway and saw his playoff run end when he finished fourth. As a consolation prize, he won the pole and swept all three stages in the NASCAR Camping World Truck Series finale at Phoenix (Ariz.) Raceway.

Veteran crew chief Danny Stockman will once again call the shots for Smith and the No. 18 team in 2022. Stockman’s drivers have produced eight victories at KBM since he joined the organization in 2020, including four with Smith behind the wheel. The veteran crew chief captured a Truck Series championship with Austin Dillon in 2011 and also won an Xfinity Series championship with Dillon in 2013. Stockman has been atop the pit box for two Truck Series races at Richmond, both with Smith, with a best result of fourth in last year’s event.

Charge Me will be the primary sponsor on Smith’s No. 18 Tundra TRD Pro for the final time this season Saturday at Richmond. Charge Me was founded on the principle that the electric vehicle (EV) revolution will require robust infrastructure support at all levels.

Chandler Smith, Driver Q&A:
Chandler Smith | Richmond Raceway Preview
Talk about the experience of welcoming your first child to the world.
“It’s been amazing to say the least. Everyone talks about how life changing it is to have a child, to get married and to be a father, and to both of those points that is still an understatement saying that its life changing. We are simply blessed – it was an amazing experience for my wife through labor and delivery, and an amazing experience for myself. Obviously, me and my wife have gotten even closer now that we have a child, so it’s just overall a surreal experience and I’ve never been so happy in my life.”

You finished fourth at Richmond last year. What is your mindset heading back there this year?
“It’s a short track essentially and we have a good notebook going back there. Last year, we weren’t great there, we finished fourth, but we didn’t have a fourth-place truck. We took probably a 10th-place truck and salvaged a fourth place out of it – which is really good from a team aspect. We have a lot of notes going back on what we did wrong and what we need to do to fix that. I feel like our short track program has come a long way since last year at Richmond as well, so I’m feeling really confident in myself and my team and everybody that’s at KBM.”

How do you approach Saturday’s race being 24 points above the cutoff line for advancing to the Round of 8.
“I wouldn’t say I’m not worried about making the cutoff because anything can happen. IRP (Lucas Oil Indianapolis Raceway Park) is a prime example, we were second starting and now we are fifth or sixth, so one race can really shift things a lot. I wouldn’t say I’m not worried, but I will say that we are still going for wins, stage points, playoff points – that’s our main focus still. I feel like if the performance is there than the points will come with it.”

Chandler Smith’s No. 18 Charge Me Tundra:

KBM-70: The No. 18 Charge Me team will unload KBM-70 for Saturday’s race at Richmond. Smith has two victories with this Tundra TRD Pro, earlier this year at Las Vegs Motor Speedway and in last year’s season finale at Phoenix Raceway. He raced this Toyota most recently at World Wide Technology at Gateway, where he led 40 laps and earned the Stage One win before getting put into the wall while leading early in Stage Two. He would recover from the incident to earn a third-place finish.
KBM-70 Performance Profile: