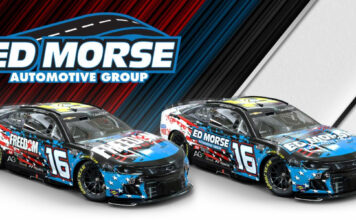 “This is the next evolution of our growing brand in the automotive world. As we enter the NASCAR universe, it is an absolute honor to partner with such a devoted and hungry racing team like Kaulig Racing,” said Teddy Morse, Chairman and CEO of Ed Morse Automotive Group.

Amid its first, full season in the NCS, Kaulig Racing continues to develop new partnerships and welcome them to the highest level of motorsports. The Ed Morse Automotive Group is headquartered in Delray Beach, Florida, and has been family-owned for over 75 years. It proudly operates 35 dealerships, 75 franchises, 39 locations, and 25 automotive and motorcycle brands.

So far in the 2022 NCS season, Noah Gragson has earned a top five and three top-20 finishes. He continues to help grow Kaulig Racing in its first, full season in NASCAR’s top series, as he carries the bulk of the remaining races in the No. 16 Camaro ZL1 that he shares with teammates AJ Allmendinger and Daniel Hemric.

“I couldn’t be more excited to have Ed Morse Automotive Group onboard the No. 16 Camaro,” said Gragson. “Teddy Morse and everyone at Ed Morse Automotive Group truly loves cars and cares about their customers, employees and community. At the end of the day, we both want to do what we love, so I’m looking forward to sharing our passions with each other and growing a partnership.”

The Morse family has been in the automotive business since 1946 when Ed Morse founded Morse Motors. Over 75 years later, Ed’s grandson, Chairman/CEO Teddy Morse continues to build on the legacy and family tradition. Headquartered in Delray Beach, Florida and with recent acquisitions into Texas, Iowa, Missouri, Illinois and Oklahoma, Ed Morse Automotive Group is considered to be one of the nation’s fastest growing and most respected automotive dealer groups. www.edmorse.com