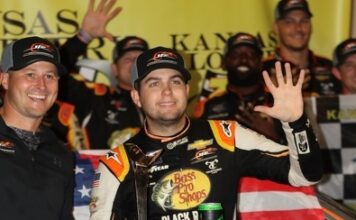 A pass for the lead with 15 laps remaining in the second stage followed by a two-lap dash to the conclusion of the stage netted Noah Gragson and the No. 9 JR Motorsports Chevrolet Camaro team a rain-shortened victory in the Kansas Lottery 300 at Kansas Speedway on Saturday, September 10.

The 24-year-old Gragson from Las Vegas, Nevada, led three times for 20 of 93-shortened laps, including the final 18, as he managed to retain the lead through two late restarts prior to the conclusion of the second stage, including a two-lap dash to the eventual finish over teammate Justin Allgaier and Ty Gibbs. When the second stage concluded on Lap 90, NASCAR directed the field to pit road on Lap 93 due to a weather delay. With the precipitation increasing and more rain approaching the track, NASCAR made the call to deem the race official and award Gragson his fifth Xfinity victory of the season and second in recent weeks after he won last weekend’s event at Darlington Raceway.

With on-track qualifying that determined the starting lineup occurring on Friday, Brandon Jones notched his fifth career pole position, third of the season and second in recent weeks after posting a pole-winning lap of 174.695 mph in 30.911 seconds. Joining him on the front row was teammate Ty Gibbs, winner of last year’s Xfinity event at Kansas who posted the second-best qualifying lap at 174.520 mph in 30.942 seconds.

Prior to the event, names like Jesse Iwuji (who replaced Kyle Weatherman for the main event despite Weatherman practicing and qualifying for the main event), Joey Gase, Josh Williams, CJ McLaughlin, Brennan Poole, JJ Yeley, Kris Wright, Stefan Parsons and Brandon Brown dropped to the rear of the field due to unapproved adjustments made to their respective cars. Ryan Vargas also dropped to the rear of the field in a backup car after he wrecked his primary car during Saturday’s qualifying session.

When the green flag waved and the race started, the field quickly fanned out to three lanes entering the first turn as Brandon Jones fended off teammate Ty Gibbs to lead the first lap. As the field continued to fan out through the second lap, AJ Allmendinger was in third ahead of Richard Childress Racing’s rookies Sheldon Creed and Austin Hill with JR Motorsports’ competitors Sam Mayer, Noah Gragson and Justin Allgaier following in pursuit.

Four laps later and following an early battle with his Joe Gibbs Racing teammate, Gibbs moved his No. 54 Reser’s Fine Foods Toyota Supra into the lead over Jones’ No. 19 Menards Toyota Supra.

Through the first 10 scheduled laps, Gibbs was leading by nearly three-tenths of a second over teammate Brandon Jones followed by Allmendinger, Gragson and Allgaier. Teammates Hill and Creed battled for sixth while Sammy Smith, Sam Mayer and Daniel Hemric occupied the top 10. Riley Herbst was in 11th followed by Ross Chastain, Ryan Sieg, Josh Berry and Brett Moffitt while Landon Cassill, Myatt Snider, Anthony Alfredo, Jeb Burton and Bailey Currey were in the top 20.

Ten laps later, Gibbs extended his advantage to more than a second over teammate Brandon Jones while third-place Gragson trailed by nearly four seconds. Behind, Allmendinger and Allgaier battle for fourth while Sammy Smith, Hill and Mayer were in sixth, seventh and eighth. Meanwhile, Creed, coming off his career-best run at Darlington Raceway, had fallen back to ninth while Brett Moffitt was in 10th.

At the Lap 30 mark, Gibbs, who was carving his way through lapped traffic, stabilized his advantage to nearly two seconds over teammate Brandon Jones while Gragson remained in third place and trailed by more than three seconds. By then, Sammy Smith moved his No. 18 Pilot Flying J Toyota Supra into fourth place followed by Allgaier while Allmendinger, Hill, Moffitt, Mayer and Herbst were in the top 10. Creed was back in 12th behind Josh Berry while Hemric, Cassill and Chastain battled in the top 15.

When the first stage concluded on Lap 45, Gibbs rocketed his way to his fifth stage victory of the 2022 season. Gragson, who navigated his way around Brandon Jones for the runner-up spot nearing the Lap 40 mark, settled in second followed by Jones, Sammy Smith and Allgaier while Moffitt, Hill, Allmendinger, Berry and Herbst were scored in the top 10.

Under the stage break, the leaders led by Gibbs pitted for the first time and Gibbs retained the lead after exiting pit road first followed by Gragson, Sammy Smith, Allgaier, Brandon Jones and Hill.

The second stage started on Lap 51 as Gibbs and Gragson occupied the front row. At the start, Gibbs and Gragson dueled for the lead entering the first turn while Hill, who restarted in the top six, fanned out to three lanes in his No. 21 United Rentals Chevrolet Camaro as he moved up the leaderboard and battled Gragson for the runner-up spot. At the front, Gibbs retained the lead as Allgaier settled behind teammate Gragson and Hill before attacking Hill for third place. Meanwhile, Sammy Smith, who restarted third, fell back to sixth.

Four laps later, Moffitt, who recorded a strong top-six result in the first stage, scrapped the outside wall in Turn 1 while running in the top 10 as he dropped back to 13th while the event proceeded under green.

Through Lap 60, Gibbs was leading by more than a second over Gragson’s No. 9 Bass Pro Shops Chevrolet Camaro while teammate Allgaier’s No. 7 Brandt Chevrolet Camaro trailed by more than three seconds. Hill and Brandon Jones occupied fourth and fifth while Cassill, Berry, Sammy Smith, Allmendinger and Chastain were running in the top 10.

Ten laps later, the caution flew when Jeremy Clements, whose team awaits the verdict of appealing their encumbered victory at Daytona in August and currently sit outside of the Playoff picture, spun his No. 51 Chevrolet Camaro below the apron entering Turn 4 while trying to enter pit road. During the caution period, a majority of the field led by Gibbs pitted while names like Hill, Moffitt and Ryan Sieg remained on the track.

When the event restarted under green on Lap 75, Hill assumed an early advantage while Moffitt, who restarted on the front row and on the outside lane, spun the tires, which caused the field to jam up and fan out through the frontstretch and entering the first turn. Shortly after, Gragson rocketed his way into the lead in the backstretch. During the following lap, Allmendinger made his way into second followed by Brandon Jones, Allgaier and Gibbs while Hill continued to lose more spots on the track while on old tires.

Then with eight laps remaining in the second stage, the caution returned due to rain reported on the track. At the moment of caution, Gragson was the leader followed by teammate Allgaier, then Gibbs, Brandon Jones and Sammy Smith. By then, Moffitt, Hill and Ryan Sieg had fallen back to 15th, 17th and 19th.

With two laps remaining in the second stage, the race restarted under green. At the start, teammates Gragson and Allgaier dueled for the lead through the first turn until Gragson managed to pull ahead of Allgaier through the backstretch while Gibbs used the outside lane to bolt his way into third place.

During the final lap of the second stage, Gragson maintained the lead while Gibbs battled Allgaier for the runner-up spot in front of Jones. While the on-track battles behind the leaders continued for a final full lap, Gragson managed to cycle his way back to the frontstretch with the lead and record his 13th stage victory of the 2022 season. Behind, Allgaier edged Gibbs to settle in second despite getting body-slammed by Gibbs approaching the start/finish line. Brandon Jones and Chastain settled in the top five while Allmendinger, Berry, Sammy Smith, Mayer and Moffitt settled in the top 10.

Under the stage break, the field led by Gragson was brought to pit road and the race was red-flagged on Lap 93 due to a weather delay.

Then as the rain continued, NASCAR deemed the race official and Gragson, who awaited any news in the garage, was awarded his fifth Xfinity Series victory of the season. The victory was Gragson’s 10th of his Xfinity career and his first in the series at Kansas as he sets his sights to the Playoffs and for his first NASCAR national touring series championship. The victory was also the 11th of the season for JR Motorsports.

“[The race] was tough,” Gragson, who still managed to display his victorious trademark by climbing the fence on the frontstretch, said on USA Network. “I don’t know if we had the fastest car there at the beginning in the first stage. I felt like if [the race] would’ve went green, we could’ve kept working on [the car], working on it. We had a pretty fast car there, but I’ll take’em any way we get’em. [Allgaier] was fast. [Gibbs] was, obviously, the fastest car all day. Extremely grateful. Super thankful.”

There were six lead changes for four different leaders. The race featured four cautions for 18 laps.

21. Jeremy Clements, one lap down

24. Josh Williams, one lap down

25. Rajah Caruth, one lap down

26. Stefan Parsons, one lap down

27. Derek Griffith, one lap down

28. Howie Disavino III, one lap down

29. Dillon Bassett, one lap down

The 2022 NASCAR Xfinity Series regular-season stretch is set to conclude next Friday, September 16, at Bristol Motor Speedway, where the 12-car Playoff field will be determined. Coverage for the event is scheduled to start at 7:30 p.m. ET on USA Network.