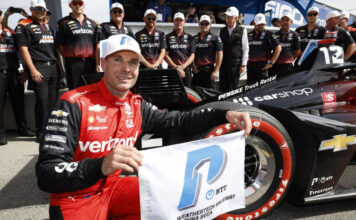 ﻿CAN YOU TAKE A MOMENT TO THINK ABOUT WHAT YOU ACHIEVED TODAY?

“Tremendous milestone. To be up there with an iconic guy like Mario is amazing. When I think about the era that he raced in, how dangerous it was and how much more a risk it was, it just blows my mind that I’m there with Mario. It’s great to have Mario here. Someone I respect tremendously and was a massive fan of growing up. I want to swap a helmet with him, put his in my collection if he would do it.”

WHAT ALLOWED YOU THIS YEAR TO WIN ALL THE POLES TO GET TO THIS MOMENT?

“Really focusing in on certain races that we knew we had a good shot at pole.”

NOW THE FOCUS TURNS TOWARD TOMORROW. WHAT IS THE MINDSET?

“We put ourselves in a great position to lead the first lap to get one point and hopefully lead the most laps to get more points. Competitors with better tires but we have track position for right now, so we’ll have a good think about it tonight and see how we attack that one. But it will be a long day. I’ll do my best. “

Mario Andretti, who held the record with 67 poles:

WHAT DO YOU THINK OF THIS MAN?

“Awesome. I know how much I loved qualifying and I can see that he’s the same. It’s just trying to reach and just try to do the lap that you cannot repeat and that’s what puts you on pole.”

DID YOU KNOW THAT THIS MOMENT WOULD EVENTUALLY COME?

“Absolutely. It’s great fort the series, great for the sport. Records are made to be broken. It’s with a good man. Will Power throughout his career has been a really good qualifier. He deserves this. He’s worked for it and he’s the best when it comes to qualifying.”

WHAT IS IT THAT SETS A DRIVER APART IN QUALIFYING?

“How badly do you want it? If I had the specific formula I’d bottle it and sell it. It’s just a matter of really wanting it and just doing that lap that you know you can’t repeat. That’s how records are made.”