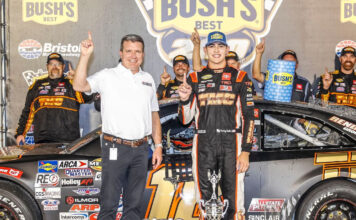 Smith clinched a pair of titles at The Last Great Colosseum: the ARCA Menards East Series championship and the Sioux Chief Showdown title.

“It means a lot,” Smith said. “I was telling these guys the two championships mean a lot, but it wouldn’t be the same if we didn’t win the race. Thanks to them and all the guys who work hard all season. Glad we were able to pull it off.”

Smith started on the pole and led 189 of the 200 laps around Bristol’s high-banked concrete oval, passing Toyota teammate Brandon Jones on lap 11 and pacing the field the rest of the race.

Jones, though, made things interesting after a caution bunched the field for a two-lap shootout to the checkered flag. Smith took the outside lane for the restart, and he and Jones raced side by side for nearly a lap.

“That was a tough restart there,” Smith said. “Glad we were able to pull it off.”

A slip heading into Turn 3 forced Jones to check up and allowed Smith to drive away.

“It came to life those last 30 laps or so, and I really started to catch Sammy,” Jones said. “I think he got trapped in some traffic as well. … I gave it all I had, and I think I just got in too deep down in Turns 3 and 4. Kicking myself a little bit; that was kind of a dumb move on my behalf. But we were trying to go for it. Gosh, we only had one lap left.

The 10-race Sioux Chief Showdown is held on short tracks and road courses and is designed to be a competition between drivers who may not be old enough to compete for the full ARCA Menards Series title and those who are.