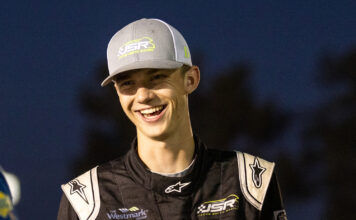 EAGLE, IDAHO (October 7, 2022) – Eagle, Idaho’s Jacob Smith, 17, will team up with Jerry Pitts Racing to debut in the ARCA Menards Series West on Friday October 14 in the Star Nursery 150 at The Bullring at Las Vegas Motor Speedway. Smith will pilot the No. 5 The Collective Region Cross Country Mortgage Ford on the three-eights mile asphalt oval.

Smith competes full-time in the MAVTV-televised Lunkerdaddy Pro Late Model Series at Madera Speedway and currently ranks third in that championship. Jerry Pitts Racing is owned by the three-time West Series champion Crew Chief with 23 wins in the series. In 2020, he was inducted into the West Coast Stock Car / Motorsports Hall of Fame.

Jacob Smith Racing will host the Drive to Live Community Health & Wellness Fair at Madera Auto Center on Wednesday October 12. The event will bring awareness to mental health issues and services available for Madera-area youth. Thursday’s schedule will include testing at Madera Speedway for Saturday’s $10,000-to-win Short Track Shootout for the Pro Late Models. Smith will travel to Las Vegas for Friday’s ARCA West race, then journey back to Madera for the 150-lap championship event on Saturday.

The teenage driver burst onto the scene in 2021 in the 51FIFTY Jr. Late Model Series. Smith earned four fast-time awards in the nine-race campaign along with two victories. He added two runner-up finishes and three third place performances to earn second place in a hard-fought championship while securing Rookie of the Year. Smith also set an all-time track record with 196 consecutive laps led.

Prior to competing at Madera, Smith was a four-time winner and Rookie of the Year in the Northwest Tour Truck Series. His eight year karting career featured 110 race starts and 70 wins including two IKF Grand National Championships in 2015.

More than 60 VIP guests from Cross Country Mortgage and The Collective Region will attend Friday’s race in Las Vegas. They will enjoy reserved seating with other guests from Jacob Smith Racing in the main grandstands.