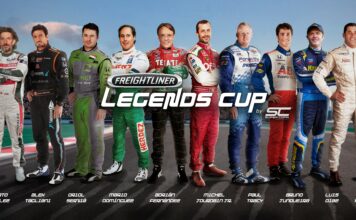 Mexico City. 18 October 2022 – Former racing legends will return to the racetrack to compete head-to-head in a spectacular support race for this year’s FORMULA 1 MEXICO CITY GRAND PRIX 2022 Presented by Heineken. A mix of international champions and race winners will return to the Autódromo Hermanos Rodríguez to take part in the Freightliner Legends Cup.

The late 1990´s and early 2000´s marked a golden era for American open-wheel racing and the IndyCar Series included the ‘world’s greatest spectacle in racing’ the famous Indianapolis 500.

The former race winners and champions returning to Mexico will drive in equally prepared 500hp V8-powered cars from the Gran Turismo México Series (GTM), capable of speeds of over 275km/h.

The full list of participants for this exciting support race over the F1ESTA weekend will be:

“Before hosting Formula 1 in Mexico, we used to promote the Champ Car World Series at the Autódromo Hermanos Rodríguez and it was as big as F1 these days. Being able to reunite all these legends together for a one-time only event here in Mexico is a huge privilege for us and for the Mexican fans. We are sure the Freightliner Legends Cup will be a successful event during this year´s race,” said Federico González, General Director of the FORMULA 1 MEXICO CITY GRAND PRIX 2022 Presented by Heineken. “It will be a very special event to bring together great drivers who gave us unforgettable moments in the past,” he added.

As a runner-up in the CART Series and a prolific Le Mans 24 Hours racer, Fernández has been one of the most successful Mexican drivers of all time. He first competed in CART in 1993 with Galles Racing and won his first victory in the category at Toronto in 1996. He was runner-up in the championship three years later by scoring points in 17 of the 20 races. Sharing a car with compatriot Luis Diaz, he won the LMP2 class of the ALMS in 2009.

The Canadian made his debut in CART in 2000 with Forysthe Racing, the same team which he finished fourth in the Atlantic series the year before. After a long career in single-seaters, which included pole at the 2011 Indianapolis 500, Tagliani has most recently been competing in the Canadian NASCAR series.

A former Williams test driver, the Brazilian won Formula 3000 in 2000 and switched to CART where he became one of the rookies of the year in 2001. He was runner-up in the series in three consecutive seasons between 2002 and 2004 with Newman/Haas Racing. He raced in sportscars before retiring from professional competition in 2019.

As a runner-up in Indy Lights in 1999, the American has extensive experience of NASCAR, having raced in national and Cup series for a period of 15 years. He has won the Coca-Cola 600 (in 2007) and also triumphed in the 2006 Daytona 24 Hours with Target Chip Ganassi Racing.

The Mexican made his name when he was a substitute for the injured Adrián Fernández in the CART Series race at the Autódromo Hermanos Rodríguez in 2002. ‘Chapulín’ started in Indy Lights and achieved his greatest successes alongside Scott Pruett in the Grand Am sportscar series.

Nicknamed ‘Super Mario’ the Mexico shone in the world karting championship before entering Formula 3 and Formula 3000. After graduating from Indy Lights he raced in CART, taking his first win in Australia in 2002. To the delight of the local fans he famously took a podium at the Autódromo Hermanos Rodríguez in the 2003 Champ Car race.

After taking pole in the 1990 Le Mans 24 Hours, the British driver graduated to Formula 1 with Brabham in 1991 and enjoyed a lengthy career at teams including Ligier, Tyrrell and McLaren. After his F1 career he raced in CART with PacWest Racing — finishing sixth overall in 1997. He made a surprise return to touring cars in Britain in 2019.

The Italian has competed in several high-level motorsport categories, including the Le Mans 24 Hours, IMSA, NASCAR and Champ Car. He took three wins in Champ Car and started six Formula 1 races for Footwork in 1995.

The Mexican driver has competed in a large number of international categories, including Champ Car, Indy Racing League, World Touring Cars, A1GP, sportscars and the World Rally Championship. He made his debut in Champ Car with Payton Coyne Racing in 2001 and took his first win in 2003 with Team Rahal.

The Canadian was a winner at the Autódromo Hermanos Rodríguez in the 2003 round of the Champ Car World Series. With a career spanning 30 years he raced in CART, IndyCar and the Daytona 24 Hours. Since 2014 he has been a TV commentator on NBC’s IndyCar coverage.

The Mexican began his international career in European Formula Chrysler in 2001 and jumped to World Series by Nissan in 2002. His arrival in CART was in 2003 but his greatest success came in endurance series including the American Le Mans Series and WEC.

Recognized with the award “F1’s Best Event” for the five past editions, the FORMULA 1 GRAN PREMIO DE LA CIUDAD DE MÉXICO 2022 Presented by Heineken has proven to be much more than a sporting competition to become an unparalleled promotional platform to share with the world Mexico City’s rich cultural heritage and tourist attractions.

Established in 1990, Corporación Interamericana de Entretenimiento (“CIE”) (BMV: CIE) is an outstanding participant in the out-of-home entertainment industry in Latin America. It promotes and produces concerts, music festivals, theater shows, and sporting, family and cultural events. CIE operates Centro Citibanamex, which is a venue for expositions and conventions in Mexico City, and the amusement park El Salitre Mágico in Colombia. The Company also produces corporate events and events for the public sector. CIE promotes and markets the Formula 1 Grand Prix in Mexico City.

Corporación Interamericana de Entretenimiento is a publicly traded company whose shares have been listed on the Mexican Stock Exchange since 1995 under the ticker symbol “CIE.”