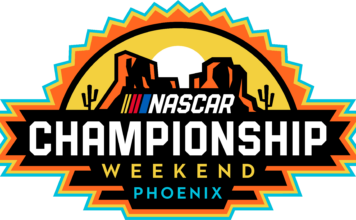 ● In the final race of the 2022 NASCAR Cup Series season, Chase Briscoe, driver of the No. 14 Mahindra Tractors Ford Mustang for Stewart-Haas Racing (SHR), returns to Phoenix Raceway where he earned his first career Cup Series win earlier this year. The 27-year-old driver started sixth and led three times for 101 laps. He held off a late-race charge from Tyler Reddick and Ross Chastain during a lap-293 restart and was in the top spot when the caution flag flew on lap 305 of the scheduled 312-lap race, setting up a green-white-checkered shootout. The 27-year-old from Mitchell, Indiana, then drove away from Reddick, Chastain and nine-time Phoenix winner and SHR teammate Kevin Harvick. The win was the first for the No. 14 team since Clint Bowyer’s 2018 win at Michigan International Speedway in Brooklyn.

● With the victory at Phoenix, Briscoe became the 200th Cup Series winner and the first driver to take a car carrying the No. 14 to victory lane at Phoenix. He also joined Alan Kulwicki (1988) and Bobby Hamilton (1996) as the third driver to earn his first Cup Series win at the desert mile oval.

● In just his second fulltime Cup Series season, Briscoe earned his first win, first pole, made the playoffs for the first time and advanced as far as the Round of 8. Though his playoff run ended last weekend at Martinsville (Va.) Speedway, it wasn’t without a fight to the end as Briscoe found himself leading and in position to earn in spot in this weekend’s Championship 4 until the final four laps of the 500-lap event. Entering Phoenix, he has five top-five finishes and nine top-10s with five of his top-10s coming in the last six races.

● As the 2022 season comes to a close, Briscoe also nears the completion of only 10 years of racing on pavement. Prior to 2013, when he made his first start in what was then the K&N Pro Series West, Briscoe competed solely on dirt. He finished top-10 in his first of three K&N starts and continued to build on his pavement-racing legacy from there.

2015 – Briscoe made two starts in the ARCA Menards Series, finishing 10th in his first race and fifth in his second.
2016 – Running fulltime in ARCA for Cunningham Motorsports, Briscoe won six races as a rookie and was named the 2016 ARCA Series champion.
2017 – Briscoe began racing in the NASCAR Camping World Truck Series for Brad Keselowski Racing. He made the playoffs, earned his first win in the season finale at Homestead-Miami Speedway and was named Truck Series Rookie of the Year.
2018 – Competing part-time in the NASCAR Xfinity Series, Briscoe earned his first win in the SHR No. 98 Ford in the inaugural race on the Charlotte (N.C.) Motor Speedway Roval. The win helped springboard him to a fulltime ride the following season.
2019 – With a win in June at Iowa Speedway in Newton, his second in the Xfinity Series, Briscoe made the playoffs in his first fulltime season. He advanced to the Round of 8 and was named Xfinity Series Rookie of the Year.
2020 – Briscoe advanced to the Xfinity Series Championship 4 after visiting victory lane nine times in his second fulltime season and was named as the next driver of the SHR No. 14 in the Cup Series.
2021 – In his first full season in the Cup Series, Briscoe earned three top-10 finishes, all on road courses, and was named Rookie of the Year.

● Briscoe has four career NASCAR Xfinity Series starts at Phoenix and each resulted in top-10 finishes. His best is sixth, scored twice – March 2019 and 2020. He also made one NASCAR Camping World Truck Series appearance there in November 2017, when he started eighth and finished fourth in his Ford F-150, securing his 13th career top-10.

● Mahindra Tractors, a brand of Houston-based Mahindra Ag North America, returns to the No. 14 Ford Mustang for the season finale. Part of Mahindra Group’s Automotive and Farm Sector, Mahindra Ag North America is the No. 1-selling farm tractor company in the world, based on volumes across all company brands. Mahindra farm equipment is engineered to be easy to operate by first-time tractor or side-by-side owners, and heavy duty to tackle the tough jobs of rural living, farming and ranching. Steel-framed Mahindra tractors and side-by-sides are ideal for customers who demand performance, reliability and comfort at a great value. Mahindra dealers are independent, family-owned businesses located throughout the U.S. and Canada.

Chase Briscoe, Driver of the No. 14 Mahindra Tractors Ford Mustang for Stewart-Haas Racing:

We’re headed back to Phoenix, where you won earlier this year. How is your confidence going in knowing that you’re the guy who went to victory lane there this year and you can put it all on the line for another victory?

“I definitely think it adds some confidence just knowing that we’ve won there, but so much has changed. It’s not like our car that was so good there the first race is going to be any good going back. If we did the same setup, we’d be so far in left field, so I think it helps knowing that we’ve won there, but it’s still going to be a challenge. Hopefully we’re in that situation after practice and qualifying, where we’re talking about defending the win. Anytime you go to a racetrack where you’ve won before, it makes a difference. It’s nice to go back there and try to defend that spring race and hopefully finish the season with another win.”

What do you think is the most important thing you can take away from this season?

“I feel like, through my whole career, I’ve never given up in a race. I’m always giving it 100 percent every lap. But I felt like, in the playoffs this year, I did a lot better job of weighing risk versus reward and kind of knowing when to just maintain where you’re at. I paid a lot of attention to (Kevin) Harvick, he’s so good at that. At the beginning of the race, he might not be the best car, but at the end he finds himself up there in position. I’ve learned a lot about how to put a whole race together, where I probably didn’t do the best job of that for really my entire career up to this point. Looking back at the playoff run, we had a string of four races where I would say two of those we definitely finished better than where we ran all day and it was just a matter of being patient, just chipping away at it until I put myself in position. On the restarts, try to gain two or three spots. So, I feel like I learned a lot about when to not put yourself in a bad situation trying too hard. I didn’t do a very good job of that in the regular season but I feel like I did a lot better in the playoffs.”

Official Release
Previous article
Carson Hocevar – Lucas Oil 150 Race Advance
Next article
Mobil 1 and Hagerty Make Their Partnership Official: The Legendary Motorsports and Automotive Brands are on a Mission to Save Driving and Celebrate Car Culture