NASCAR to Participate in the 2023 Rose Parade 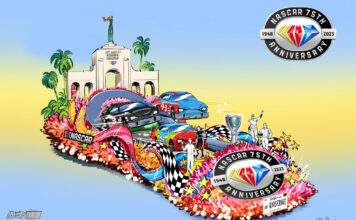 The Float Will Spotlight NASCAR’s 75th Anniversary, Busch Light Clash at the Los Angeles Memorial Coliseum in the Annual Tournament of Roses Celebration

DAYTONA BEACH, Fla. – (Nov. 10, 2022) – NASCAR will kick off its 75th anniversary celebrations at the start of the new year with a vibrant display in the 2023 Rose Parade® presented by Honda, highlighting the thrills of racing in full bloom.

The parade, part of the Pasadena Tournament of Roses® which also features the famed college football Rose Bowl Game®, will be held Monday, Jan. 2. Hundreds of entries will process down the 5.5-mile route, including NASCAR’s display, showcasing the 75th anniversary and the upcoming Busch Light Clash at the LA Coliseum. The float is titled ‘Always Forward’ – a nod to the theme of the 2023 parade ‘Turning the Corner.’

“We’re beyond thrilled to be participating in such an incredible spectacle as the Rose Parade,” said NASCAR Vice President of Marketing Services Patrick Rogers. “There’s truly no better way to enter NASCAR’s 75th year than by celebrating at an event that brings people together through immense creativity and color. With a theme that so closely resembles the growth of our sport and organization, I can’t wait to see our float come to life in the new year.”

As per tradition, floats in the Rose Parade are entirely decorated with natural elements such as florals, seeds, fresh leaves, nuts, spices and other herbage. Each float requires tens of thousands of floral and non-floral materials to decorate fully.

NASCAR’s float design features the renowned entrance of the Los Angeles Memorial Coliseum with the Olympic Caldron atop the Peristyle, with speedy stock cars racing around a track surrounded by checkered flags, ribbons, palm trees and more, headed by the diamond logo to signify the start NASCAR’s 75th year. The float stands 25 feet tall, from the base to the top of the flame, and 55 feet in length.

The Coliseum façade will be decorated with light and dark sesame seeds while the caldron will be coated in Green Tea leaf, with warmly hued carnation petals as the flame. The cars, track, ribbons and checkered flags will be adorned with elements such as red cranberry seed, black seaweed, rice, orange lentils, poppy seeds, blue statice and ground green split pea.

The NASCAR 75 diamond logo will be made up of various seeds and decorated with yellow strawflower, red carnation and blue statice, representing those three famous colors in the NASCAR bar mark. All of the float’s design elements will sit atop a base of hot pink, orange and red roses with sprinkles of blue florals throughout.

Finally, a portion of the float will bring to life philanthropic efforts in California highlighted by a NASCAR-themed license plate in partnership with the California Natural Resources Agency (CNRA), with proceeds benefitting Expo Park, parks in the Fontana, Calif. area and the NASCAR Foundation. More information can be found at www.nascarplates.com.

NASCAR will partner with Artistic Entertainment Services (AES), an official float builder and partner of the Tournament of Roses.

The annual Rose Parade celebrates 134 years of success with its upcoming celebration on Jan. 2, led by the volunteer-driven, non-profit Pasadena Tournament of Roses Association. In addition to participating in the 2023 parade, NASCAR will also be providing the Tournament’s 935 volunteers with a special Busch Light Clash and Auto Club Speedway ticket offer, in recognition of their dedication to America’s New Year Celebration®.

In ringing in 2023, NASCAR enters its diamond year as the organization celebrates 75 years of history and passion for racing. The Rose Parade kickstarts the anniversary festivities which continue with the Busch Light Clash at the LA Coliseum, and on throughout the rest of the year.

The Busch Light Clash at the LA Coliseum will be held on Sunday, Feb. 5, 2023, as a part of the destination’s “Coliseum Forever” celebration to honor the historic stadium’s centennial anniversary and will air live on FOX at 8 p.m. ET. After an action-packed 2022 season, the 2023 NASCAR season-opener is bound to be another thrilling event in a momentous year.

For more information about the Busch Light Clash and details on ticket pricing, please visit nascarclash.com.