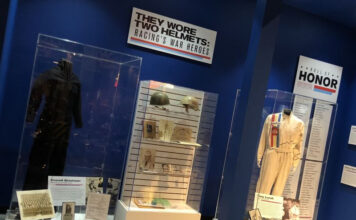 DAYTONA BEACH, Florida (November 15, 2022) — The Motorsports Hall of Fame of America (MSHFA) unveils its newest exhibit this week – They Wore Two Helmets: Racing’s War Heroes – recognizing racing legends who donned a uniform for their country. In addition to honoring their service, They Wore Two Helmets explores the connections racers across disciplines and decades felt between their military experiences and their later success in motorsports. From technical skills forged in the military, to teamwork, to risk management, to split-second decision-making and the willpower to persevere through the most trying circumstances, there is no shortage of compelling lessons these heroes of horsepower carried over from the service to the track.

NASCAR great Bud Moore (MSHFA Class of 2013) served as a machine gunner with the 90th Infantry Division in 10 months of combat, including the D-Day landings and the Battle of the Bulge. His exemplary service earned him two Bronze Stars for heroism and five Purple Hearts, exceptional even among his generation. But like countless other GIs, the war left less obvious scars on Moore. He never returned to his past battlegrounds, saying he “left too many friends…over there.” Still, he felt the trials and tribulations of service taught him discipline and how to compete in adverse conditions. And compete he did, garnering over 60 wins and two NASCAR Cup Series championships as a car owner as well as an SCCA Trans-Am title.

Born in Glendale, California to immigrant parents, Takeo “Chickie” Hirashima began making a name for himself as riding mechanic for open-wheel great Rex Mays (MSHFA Class of 1995). That all changed when Executive Order 9066 was issued in 1942, imprisoning 120,000 people of Japanese ancestry. Two-thirds of them were U.S. citizens. After a year at Manzanar internment camp, Hirashima was drafted and assigned to the 522nd Field Artillery of the 442nd Regimental Combat Team. This majority Japanese American unit became the most decorated of its size in U.S. history. Hirashima went on to become an Indy legend after the war, working on six 500-winning teams. Reminiscing about her “Uncle Tak,” niece Carolyn Cook perhaps said it best. He lived his life like the 442nd’s iconic motto: Go For Broke.

A 2005 MSHFA Sports Cars inductee, Hurley Haywood received his draft notice for Vietnam within months of his professional racing debut at Watkins Glen. For the next 13 months, Haywood was based with the 164th Aviation Group in the dangerous Mekong Delta. Looking back on how his service prepared him for later success, Haywood told us “When you’re stuck in a foxhole with…bullets flying around you…you tend to grow up in a big hurry,” a perspective that gave him an advantage on track over sometimes more reckless peers. Combined with the strict race-day regimen of teammate and fellow veteran Peter Gregg (MSHFA Class of 2000), it’s small wonder Haywood went on to become America’s most accomplished endurance driver.

These connections remain with the current generation of racers like Jesse Iwuji. Graduating from the U.S. Naval Academy in Annapolis in 2010, Iwuji made two deployments to the Middle East as a surface warfare officer with MCM Crew Exultant and aboard the landing ship USS Comstock. When asked about connections between the military and racing, Iwuji felt the command structure and teamwork of the Navy ideally prepared him for working with his crews on the Camping World Truck and Xfinity circuits. He continues to make waves in the sport, serving as a racing ambassador for wounded veterans and founding Jesse Iwuji Motorsports with NFL legend Emmitt Smith in 2021.

Haywood will be the featured guest at the official ribbon-cutting ceremony that formally opens the new display this Thursday, November 17 at Noon EST. Other guests scheduled to attend include Jake Johansson, a retired U.S. Navy Captain with 35 years of military service who was elected last week to the Volusia County Council At-Large seat, and a contingent of Air Force ROTC students from nearby Embry-Riddle Aeronautical University. In his military career, Johansson commanded a combat squadron in Iraq and a Naval base in Norfolk, Virginia, home to one of the largest military populations in the world.

Other featured stories in the new exhibit include drag racer Ed Pink (Class of 2012), who carried an M1 rifle in Korea before trading it for a wrench and becoming an engineering legend, AMA great Everett Brashear, who enlisted in the Navy just past his 17th birthday and served in the Pacific Theater in World War II and inaugural Indy 500 champion Ray Harroun (Class of 2000), whose Navy service in the 1898 Spanish-American War predated widespread motor racing in the U.S.

Fans can see the new exhibit at the MSHFA Museum, which is housed in Daytona International Speedway’s Ticket & Tours Building located in front of the famed 2.5-mile DIS tri-oval. Access to the MSFHA museum is included with every Daytona International Speedway tour, which run throughout each day, or as a museum-only ticket. The museum is open daily 10-5 nearly year-round except major holidays. It is visited by more than 100,000 guests each year from every state in America and countries all over the world. A digital exhibit will also be available on the updated MSHFA website, due to launch in the near future.

For more information or to discuss sponsorships and donations, visit the MSHFA at www.mshf.com or contact MSHFA President George Levy at (248) 895-1704 or glevy@mshf.com. For museum tickets call 1-800-PIT-SHOP.

About the Motorsports Hall of Fame of America: The MSHFA is the only hall that honors all American motorsports: cars, motorcycles, airplanes, off road and powerboats. Its mission is to celebrate and instill the American motorsports values of leadership, creativity, originality, teamwork and spirit of competition. Founded by Larry G. Ciancio and Ronald A. Watson, it held its first induction in 1989. Watson spent the next 30 years tirelessly building it into the nation’s premier such hall until his passing in 2019. The original museum in Novi, Mich., relocated to Daytona Beach, Fla., in 2016 and greets more than 100,000 guests a year. MSHFA is operated by the nonprofit Motorsports Museum and Hall of Fame of America Foundation, Inc.