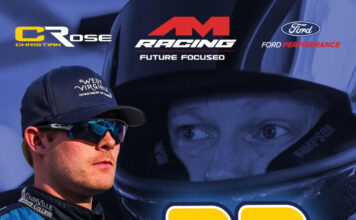 STATESVILLE, N.C.: Officials from AM Racing confirmed today that Martinsburg, West Virginia native Christian Rose has joined the organization and will compete for the 2023 ARCA Menards Series championship title beginning with next month’s season-opener at Daytona (Fla.) International Speedway on Sat., Feb. 18, 2023.

The duo will launch their new partnership during this weekend’s preseason testing at the 2.5-mile superspeedway on Fri., Jan. 13 and Sat., Jan. 14.

Rose, a former Division 1 baseball player for the University of Maryland Eastern Shore has traded the glove and bat in for a steering wheel and helmet and has set achievable goals for his first full season of stock car competition aboard the team’s flagship No. 32 Ford Mustang.

Rose joins the Statesville, N.C.-based team on the heels of a limited ARCA schedule in 2022 competing in a series of races on ARCA’s platform with Cook Racing Technologies which was highlighted by a career-best seventh-place finish at Kansas Speedway last October.

Despite less than five years of experience as a driver, Rose has captivated an audience with his ability to quickly dial in his race car and backup his intuition with his race craft on the track which included producing two top-10 finishes in his only two starts in the ARCA Menards Series West division during the 2021 season at the Las Vegas (Nev.) Motor Speedway Bullring and All American (Calif.) Speedway.

This year with the AM Racing team leadership and the support of Ford Performance, Rose is hoping for explosive results.

“I am incredibly humbled by this opportunity to compete full-time in the ARCA Menards Series for AM Racing,” said Rose. “I have learned so much over the past two seasons of a part-time ARCA schedule that I am excited to elevate my schedule this year which includes visiting new tracks of new disciplines with the goal of being in contention to win races and compete for the championship.”

AM Racing, which combined forces with Win-Tron Racing at the start of the 2020 ARCA Menards Series season will return to the series full-time for the first time since 2018 when Bluffton, S.C. native and two-time ARCA winner Gus Dean was at the helm.

“We are excited to return to the ARCA Menards Series full-time in 2023,” said AM Racing team principal Kevin Cywinski. “We have a lot of positivity surrounding our team with the launch of our Xfinity program with Brett (Moffitt) and now returning to ARCA with Christian (Rose).

“I strongly believe that the two programs will complement each other and work together to achieve the goal of bringing checkered flags back to the shop throughout the season.

“Christian is a very passionate and dedicated driver who won us over with his positive outlook and contagious work ethic. We look forward to helping him strengthen his racing resume immensely this season.”

The team’s sponsorship lineup along with a crew chief will be announced in the weeks leading up to the series’ 71st anniversary season in 2023 and its 60th race at the “World Center of Racing” on Feb. 18.

In addition to ARCA, Rose and AM Racing also plan to compete in a limited number of NASCAR CRAFTSMAN® Truck Series races which will be announced at a later date.

AM Racing is a multi-tiered, multi-faceted Motorsports program headquartered in Statesville, N.C.

Established in December 2015, AM Racing is prided on faith, honesty and intelligent performance.

The family-owned team will compete in the ARCA Menards Series, the NASCAR CRAFTSMAN® Truck Series and the NASCAR Xfinity Series in its seventh year of competition.

The team has named Brett Moffitt and Christian Rose as their primary drivers for the 2023 Xfinity and ARCA Menards Series seasons.