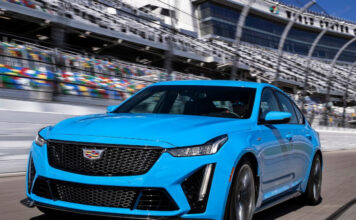 DETROIT (Jan. 24, 2023) — Nine Cadillac Racing drivers, their respective team personnel and a large support group have the common goal of visiting Victory Circle in the 61st Rolex 24 At Daytona.

Excitement has been building for the debut of the three Cadillac hybrid prototypes in the reborn Grand Touring Prototype (GTP) class with the command to start engines Saturday, Jan. 28, for the twice-around-the-clock race given by grand marshal Mark Reuss, president of General Motors.

The No. 01 Cadillac prototype led the three-car contingent in the 20-minute qualifying session on the 3.56-mile, 12-turn Daytona International Speedway road course by claiming a second-row spot. The No. 02 Cadillac prototype qualified fifth and the No. 31 Whelen Engineering Cadillac qualified sixth.

Cadillac Racing has earned the overall victory in the Rolex 24 At Daytona – the traditional season-opening race of the IMSA WeatherTech SportsCar Championship – four times since the 2017 debut of the DPi class. Not one has come from a pole start.

“I think there’s always a big excitement coming into a new season, especially with the first event so big,” said 2021 DPi champion Pipo Derani, co-driver of the No. 31 Whelen Engineering Cadillac prototype with Alexander Sims and Jack Aitken.

“After you do this for a few years, you learn how to control your emotions. Everything just falls into place. You just do what you have to do. Once you focus on that and know you have that support from the team, then you’re also more relaxed.

“There’s really nothing different to do than what you’ve already done and those things have worked because we’ve won races and championships. That also helps you calm down and focus on the important things. Come race day and come Sunday afternoon, you hope everything fell into place and you have the shot at victory in this event.”

Design of the new race car began more than two years ago, with on-track development beginning in July 2022. Cadillac Racing continues to collect data and gain insights about the car, its systems and the new Michelin tires with every on-track session. And the race will be a learning opportunity for future events.

“There has been a ton of work leading up to that moment here in Daytona to get ready and get the cars there,” said Sebastien Bourdais, co-driver with Renger van der Zande and Scott Dixon of the No. 01 Cadillac entry. “Every time there’s a regulation change, you show up at Daytona, the hardest race of the year, it’s a 24-hour race, and it’s in January. Nobody feels ready, but you’ve got a job ahead and you have to make the best of it. Thanks for all of the efforts the team has done whether at Cadillac or at Ganassi. Looking forward to a great season, and it starts today.”

The electrified Cadillac prototype features an all-new Cadillac 5.5-liter DOHC V8 engine developed by GM’s Performance and Racing propulsion team based in Pontiac, Michigan, with a seven-speed sequential gearbox. IMSA has specified the power output at 670 horsepower, including the hybrid system; weight at 1,030kg without fuel and driver; and a maximum of 8,800 RPM.

Cadillac, the only LMDh manufacturer with a naturally aspirated engine in the GTP class, will seek to build on its legacy of success in the 61st Rolex 24 At Daytona with its fifth overall victory 2017. The list:

Also, since 2017, a Cadillac prototype has recorded 27 victories in IMSA WeatherTech SportsCar Championship competition – the most by any manufacturer — and three Manufacturer Championships.

Spectators can see the lineup of exciting Cadillac performance vehicles at the Cadillac display in the midway. Times:

Sebastien Bourdais: “I think (qualifying) is a strong start; obviously not the pole but as close as we can get without getting it. I think it bodes well for the race. Now it’s just about executing, making no mistakes. It’s like a crash course of learning. There’s so much to absorb, so much to figure out, so much to strategize with the new car because up until not long ago we were completely in practice mode trying to get the car reliable, tire testing, this and that and the other and then all of a sudden get ready for the biggest race of the season. It’s a big adjustment, mind switch and get into the racing vibe for a 24-hour race with my two great teammates. We’ve learned a lot of the car and we’re gaining confidence.”

Renger van der Zande: “I’m excited how close the field is; everybody is within a couple of tenths (of a second) and that’s an impressive effort for a new class, new regulations and for the systems that have been put in place to go racing for the future. Starting fourth is an amazing achievement and a compliment to whole team.”

Scott Dixon: “I’m looking forward to the race this weekend. It’s kind of crazy when you look at the preparation from when the first car arrived to its development of it and how the technology has shifted. It’s been fun to work with it, so I think everyone is excited to finally get to the race. There’s been a lot of prep and lead time and expectations for this one. It’s one of my favorite races of the year. You get to drive the car a lot, you get to have some fantastic racing. I think this year one of the largest fields that we’ve seen in years. It’s going to be fun, but I think it will possibly a race of reliability as well. Knock on wood that we’ve done as much as we can as a group between Cadillac, GM and Chip Ganassi Racing that we can make it to the win and be fighting for the win.”

Earl Bamber: “A good qualifying with everyone learning these cars. We can see already that it’s ultra-competitive and it’s a true credit to IMSA, the manufacturers, the teams and everyone who’s been involved to make for a great race.”

Alex Lynn: “I really am enjoying driving this car and it’s giving me really good feedback. We’re improving so much with each session and it’s a really enjoyable job when you start making huge strides on improving this brand-new vehicle that we got, so I’m excited for the race.”

Pipo Derani: “The car is working well and the most is that it looks like we have a good car for the race. That’s our goal. We’re trying to use every session that we have, even qualifying, to learn more about our equipment. Any time we can be on track it helps us get better and improve the car. Not the fantastic final result in qualifying but lots of data has been gathered that will help us next week.”

Alexander Sims: “We’re working through things in the practice sessions and there are still some things for us to learn with these new cars. We have time this week to try a few things. In the first part of the race we have to take it step by step and try to improve, even if it means making changes during the pit stops – just tweaks we can do during the race – because it’s about being fast at the end and being there at the end. It’s an incredibly tight field and Pipo (Derani) was compromised in qualifying with the red flag, not getting a reference beforehand while others did.”

Jack Aitken: “We didn’t get a huge amount of mileage (during the Roar) just with red flags and weather, so this week we’ll keep building on what we’ve learned and get the car dialed in more on specifics. We’re all disappointed with the quals, but it’s probably the least important qualifying of the year for us. I’m looking forward to getting track time in practice and excited to compete for the first time in the race with this team.”