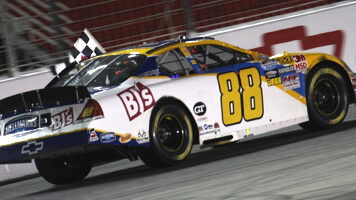 Kasey Kahne brought the field to the green flag for the Great Clips 300, NASCAR Nationwide Series  race at Atlanta Motor Speedway Saturday night with a near blinding sun off of turns one and two. With pressure from the start from Kyle Busch and Ryan Newman, Kahne steadfastly held his line and prevailed for the first 3 laps before Bush would get by.

But Kahne was not about to give up as he dogged Busch, taking the lead back on lap 11. Kahne could not hold on up front as Bush moved past him again on lap 25.  As the 50 lap mark approached Jamie McMurray was charging forward and moved past Kahne to take second place.  The first caution of the race came for debris on the front stretch on lap 43. The race went green again 4 laps later.

Busch held onto the lead as Michael McDowell spun in turn 2 on lap 61 bringing out the races second caution.  Following pit stops McMurray emerged the leader as the green flag flew on lap 64. McMurray’s lead  only lasted  5 laps as Kevin Harvick roared past to become the fourth leader on lap 70. Harvick fought hard to stay out front and managed to hold off the field until Kyle Busch took over once again on lap 122.
With 50 laps to go in the race the top five included, Busch, McMurray, Harvick, Edwards and Keselowski.

Caution number three came out on lap 148 when Trevor Bayne slid up high on the backstretch just as Ryan Newman was going high to pass him. The contact sent Bayne spinning into the inside wall. As the leaders pitted on lap 149, it was Jamie McMurray once again taking the lead, where he stayed until the fourth caution came out on lap 169 when Reed Sorenson spun on the backstretch.

As the leaders came in for their final pit stops, Brad Keselowski stayed out to take the lead.  However, with fresh tires, Jamie McMurray made quick work of Keselowski taking the lead for the final time. Staying out front, holding off Kyle Busch in the closing laps, McMurray brought the #88 car to Victory Lane for his first NASCAR Nationwide Series win of the year. Busch was followed across the line by Carl Edwards, Kevin Harvick and Matt Kenseth.  Rounding out the top ten were Joey Logano, Jason Leffler, Ryan Newman, Paul Menard and Rookie Ricky Stenhouse Jr.

The win was McMurray’s eight win in 179 career NASCAR Nationwide Series races, his last win came at Darlington Raceway on November 13, 2004.  This was his second win and fourth top ten at Atlanta Motor Speedway.