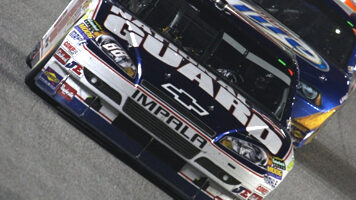 I’m not sure if he was the first to say it but this simple phrase captures the heart and soul of the man we knew as “The Intimidator.” His fierce determination to never settle for anything less than first place resulted in seven championship titles.

The history of auto racing is filled with colorful characters who willingly share their unique perspectives. If you really want to know the story of competitive racing, all you have to do is listen.

In unguarded moments, their words can paint a picture that takes us inside their world. Through humor and passion, they shine a light on racing and bring the sport to life.

When Janet Guthrie was asked how to succeed in racing, her answer was short and to the point. “Be born rich,” she said.

Today’s media can quickly turn our racing stars from ordinary men and women into superheroes but the pioneers of yesteryear didn’t drive for fame or fortune.

“We drove for the sheer fun of driving because there wasn’t that much money to be made.”

“Sometimes it seemed like the more you drove the less money you had,” Louise Smith once said. “I remember one time Buck Baker and Lee Petty and I had to put our money together just to split a hot dog and a Coke.”

While all drivers strive for the same goal, each individual has their own distinct philosophy on winning.

“The winner ain’t the one with the fastest car; it’s the one who refuses to lose.” Dale Earnhardt

“Racing is a matter of spirit not strength.” Janet Guthrie

“To finish first, you must first finish.” Rick Mears

It takes more than skill and determination to win races. Innovation can often mean the difference between success and failure.

“Trying to figure out NASCAR’s rule book threw me at first. Then, after studying the rules from all sides, I realized I’d made a colossal mistake. I’d been reading the rule book to see what it said. And all along what I should have been doing was finding out what it didn’t say. After I started doing that, racing became fun in a big way.” Smokey Yunick

Some drivers yearn for the good old days when wins meant bringing home food to put on the table and emotions were raw.

“Moonshiners put more time, energy, thought, and love into their cars than any racer ever will. Lose on the track and you go home. Lose with a load of whiskey and you go to jail.” Junior Johnson

“Years ago, you used to get out and fight and run around and chase each other with a jackhammer and stuff like that. Those were the good old days.” Dale Earnhardt Jr.

NASCAR has provided us with unprecedented access to the drivers and a front row seat to the intensity and frustration of competition.

“I love this kind of racing, but these guys sure change their personalities in race mode. They’re like Doberman pinschers with a hand grenade in their mouths.” Boris Said speaking about Sprint Cup drivers.

“Passing Earnhardt is like trying to take a bone out of a Pit Bulls mouth.” Buddy Baker

“You learn more from your mistakes than you do from your success, and last year I learned a lot. That was an unfortunate season but maybe I needed to experience it to get back mentally to where I need to be.” Dale Earnhardt Jr.

A driver needs skill, determination and money in order to succeed. A sense of humor doesn’t hurt either.

“I got wrecked racing for last. That’s Bristol.” Todd Bodine

If we’re going to keep fuel mileage racing, we might as well build solar cars and let the sun decide who wins. Tony Stewart

“My grandfather is the King, My Dad is the Prince, I guess that makes me the Butler.” Adam Petty

“I make jokes about the fact that as a neurosurgeon I shouldn’t be required at a motor race because the drivers don’t have any brains…. otherwise they wouldn’t race.”

Much has changed over the years but the quest for victory remains the ultimate goal. Capturing that elusive win can bring the toughest competitor to tears.

“I cried a little bit in the race car on the way to the checkered flag. Well, maybe not cried, but at least my eyes watered up.” Dale Earnhardt Jr.

You will never know the feeling of a driver when winning a race. The helmet hides feelings that cannot be understood. Ayrton Senna

“We lost everything here. To come back here and win with that number means everything.” Tony Eury Jr.

When all is said and done, you can sum up auto racing in three words.

“If I died right now, my life would be complete.” Tony Stewart after winning the Allstate 400.

Angela Campbell
A native of Charlotte, NC, Angela (Angie) was first introduced to racing by her father. An avid fan of NASCAR, she found a way to combine her love of racing with her passion for writing. Angie is also an award-winning member of the National Motorsports Press Association. Follow her on Twitter @angiecampbell_ for the latest NASCAR news and feature stories.
Previous articleJamie McMurray claims victory for JR Motorsports
Next articleMark Martin’s Classiest Season Yet