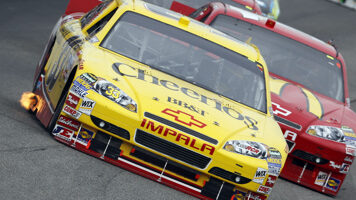 During the previous weekend we witnessed a 500 mile race at the Talladega Super Speedway that had 87 lead changes in 188 laps. We watched a beleaguered Chase team rise to the top of the charts and find victory lane again. We learned the true value of computerized scoring loops. We watched the Sprint Cup Chase for the Championship standings turn into a NASCAR dream come true and we were treated to a tailgate party that was simply awesome.

With those thoughts in mind let’s begin with:

HOORAH to Clint Bowyer for winning Sunday’s Amp Energy Juice 500 at Talladega. The win was Bowyer’s second of the season and 4th career win. Team mate, and fellow Chase contender, Kevin Harvick finished second. That leads to a HOORAH to team owner Richard Childress who collected his 11th team win at Talladega. When you consider the overall status of this organization last year, their 2010 season has been an amazing turn around.

HOORAH to the power plants manufactured by Earnhardt Childress Racing Engines. Their good work has led to victories in all four of this year’s high speed restrictor plate races.

HOORAH for the computer scoring loops that actually determined the winner of this race. When the caution came out during the final lap, NASCAR officials had a high tech reference center at their disposal to determine which car was in the lead when the yellow came out. Naturally, an important review of this nature took a few moments. Meanwhile Bowyer and Harvick were cruising in front of the fans waiting for the final decision. Only team owner Richard Childress knew for sure he was supposed to report to victory lane. He just wasn’t sure which driver he was going to be shaking hands with.

HOORAH to both of these drivers for stopping on the front stretch to shake hands. That’s the kind of post race class we like to see.

HOORAH to Kevin Harvick’s crew led by crew chief Gil Martin. Harvick sustained some front end crash damage after Marcus Ambrose spun in front of him. In a sheer note of irony it was his team mate and race winner, Bowyer, who accidentally tapped Ambrose to launch the accident. The Harvick team did an outstanding job with patching up the front end of the car while keeping their driver on the lead lap. Harvick took it home from there.

WAZZUP with driver A J Allmendinger and that horrible accident that brought out the final caution to begin with? The destroyed race car was absolutely the last thing the financially strapped Richard Petty Motorsports needed to see. Prior to the race Allmendinger admitted that he had knots in his stomach because he’s not sure about his future with the team.

But that crash does lead to a HOORAH for the safety innovations installed in NASCAR’s Car Of Tomorrow from the very beginning. This accolade also applies to the SAFER barrier walls that is employed by the speedways the series races at. It wasn’t that many years when an upside down crash, like Allendinger’s, would have become an extremely serious incident.

HOORAH to the Chase standings that followed this race. With three races left in the season, Jimmie Johnson has a slim 14 point advantage over Denny Hamlin and is only 38 points ahead of Kevin Harvick. The 2010 NASCAR Sprint Cup Chase For The Championship has the makings of a shootout and NASCAR has to be thrilled with what they’re seeing right now.

WAZZUP with no one wanting to draft with Jimmie Johnson during the final laps of this race? Could it be that no one wants to see this #48 win a fifth consecutive championship?

Have I told you lately how much I love the NASCAR Camping World Truck Series?

HOORAH to Saturday’s Mountain Dew 250 and the exciting finish NASCAR’s truck drivers presented the fans. The sight of race winner Kyle Busch, Aric Almirola and Johnny Sauter racing three wide to the checkers, only two-one thousandths of a second apart, was breath taking.

HOORAH to Kyle Busch Motorsports for taking over the lead in the coveted owner’s point championship. Steve Germain, owner of Todd Bodine’s Toyota, started the race 39 points ahead of Busch in the standings. Busch finished the race 42 points ahead of Germain.

WAZZUP with all of the bump drafting that often doesn’t work between these trucks? Prior to the race Series Director Wayne Auton warned the teams about bump drafting saying the bumpers on the trucks just simply weren’t a good match for this type of activity.

WAZZUP with the drivers not heeding this warning. With three laps left in the race, it was an ill timed and placed bump draft that turned Todd Bodine’s truck which caused him to collect Ron Hornaday Jr. The Hornaday truck wound up on its roof. Once again a HOORAH goes out the NASCAR mandated safety equipment which more than did it job by allowing Hornaday to leave the infield medical center with a smile on his face.

This week’s NASCAR notable quotable HOORAH goes to the always fun Michael Waltrip. Each year, during the Halloween racing weekend the SPEED Chanel’s crew assigned to the truck series goes all out with the costumes. This year they chose to dress like the characters from the television show “Gilligan’s Island.” That included Waltrip’s transformation to playing the millionaire’s wife: Mrs Thurston Howell III. During the excitement level of the final ten laps in this race, Waltrip yelled “this is making my make up run.”

Our final WAZZUP of the week contain some rather bizarre circumstances. The WAZZUP goes to the Dusty Whitney owned #46 Dodge team driven by Michael McDowell. During a pre race inspection by Sprint Cup officials last Friday it couldn’t help but be noticed that there were some ball bearing rolling out of the front of the car. It turned out that the car’s lower A arms had been hollowed out and filled with the bearings. This unique maneuver lowers the car’s center of gravity and improves handling capabilities. It also allows the team to remove some weight from a higher portion of the car. NASCAR is expected to respond with a penalty sometime on Tuesday. It’s a good possibility that the price of ball bearings could soar to around $5,000 per pound.

Finally this week comes a sad GOD BLESS to the family, friends and fans of Jim Hunter, the NASCAR Vice President of Corporate Communications, who passed away last Friday, at the age of 71, following a valiant battle with cancer.

Hunter’s motorsports career spanned six decades. He was an award winning member of the motorsports media, a motorsports author, a public relations rep for Dodge Motorsports and President of the Darlington Raceway in addition to his presence in NASCAR’s top executive line up.

Anyone who has ever had the privilege of meeting Mr Hunter, and talking racing with him, fully understands just how big of a loss his passing was to the NASCAR nation.