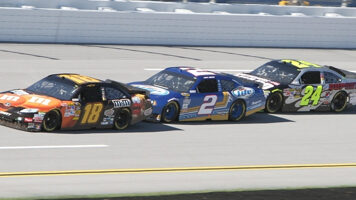 1. Jimmie Johnson: Johnson finished seventh on a wild day at Talladega, avoiding trouble and maintaining his points lead. Johnson was running up front late, but could find no help in the draft and faded slightly at the end.

“I’m not surprised I got no help,” Johnson said. “It’s me against the world out there. But, as four consecutive Sprint Cup championships will attest, I’m the world beater.”

2. Denny Hamlin: Hamlin lost the draft midway through the Amp Energy Juice 500, falling a lap down and fearing the worst in his quest for the Sprint Cup. But he got draft help from fellow Toyota driver David Reutimann, as well as several cautions, to methodically work his way back to the front. Hamlin finished ninth and now trails Jimmie Johnson by 14 in the point standings.

“I saw the Cup flash before my eyes,” said Hamlin. “I believe that’s called a ‘see’ cup, which is a common sight on a casual stroll through the Talladega infield.

I was quite surprised that Kyle Busch offered to drop back and help me regain the draft. It was a touching gesture, one in which I won’t press charges, and one that surprised me greatly. You could say Kyle ‘blinded me with alliance.’”

3. Kevin Harvick: Harvick was edged by Richard Childress Racing teammate Clint Bowyer in a photo finish at Talladega as A.J. Allmendinger’s flipped behind them. Harvick’s runner-up finish trimmed 24 points off of Jimmie Johnson’s points lead, and he now trails Johnson by 38.

“The last time Bowyer had a .002 edge,” Hamlin said, “he failed inspection.

But I’m surprised Clint didn’t get behind me and let me slip ahead for the win. That would mean Clint’s ‘got my back,’ which is what I would expect after what I did to Denny Hamlin in Clint’s honor.”

4. Jeff Gordon: Gordon was drafting with teammate Jimmie Johnson when engine trouble forced him to pull out of line with about 12 laps to go. Gordon rebounded, and the two hooked up again and we’re charging with three laps remaining. Unfortunately, they could get no help from anyone else in the field. Gordon finished eighth and is now fourth in the points, 207 behind Johnson.

“I wrote off my chances for the 2010 Sprint Cup weeks ago,” Gordon said. “With a new sponsor coming in for 2011, I prefer to look forward. And by looking forward, as opposed to looking backward, I’m more likely to see a victory.”

5. Kyle Busch: Busch was a force at Talladega, leading as late as lap 175, before getting shuffled back in the draft and fading. He finished 25th, and fell one place in the point standings to fifth, 230 out of first.

“I’m sure Denny had an empty feeling falling out of the draft and a lap down,” said Busch. “I can certainly relate, because my proposal to drop back and help him was an ‘empty’ offer.”

6. Carl Edwards: Edwards finished 17th in the Amp Energy Juice 500, as A.J. Allmendinger’s crash with one lap to go halted Edward’s expected charge to the front. Edwards remains sixth in the Sprint Cup point standings, and trails Jimmie Johnson by 247.

“I’m proud to say I led a lap at Talladega,” Edwards said. “Heck, I think there were 24 other guys that led at least one lap, including Kurt and Kyle Busch. So, in hindsight, I guess it wasn’t that special, because everybody and his brother led a lap.”

7. Clint Bowyer: Bowyer raced side by side with Kevin Harvick as the two took the white flag, but A.J. Allmendinger’s crash negated a last lap battle, and the result then rested in the hands of NASCAR officials. After several minutes of deliberation, Bowyer was declared the winner of the Amp Energy Juice 500, his second win of the Chase.

“It doesn’t matter how I win,” Bowyer said, “NASCAR still feels the need to question my results. Sure, my name is ‘Clint,’ but that’s no reason for NASCAR to be ‘dirty’ and ‘harry’ me.”

8. Matt Kenseth: Kenseth led 13 laps and finished 16th at Talladega after taking the middle line late in the race and finding no drafting help. That put a damper on Kenseth’s potential charge to the front, and left him eighth in the point standings, 324 out of first.

“Roush Fenway cars were running 16th, 17th, and 19th when the caution came out,” Kenseth said. “It’s a rare occasion we all have the chance to work together, much less agree to it.”

9. Tony Stewart: After a flat tire left him a lap down for much of the race, Stewart finally regained the lap with the “Lucky Dog” free pass on lap 180, Stewart was up to 11th and anticipating a decisive charge to the front. But, as Talladega luck would have it, he was tagged from behind in a lap 187 five-car wreck, ruining his charge and leaving him with a disappointing 31st-place finish.

“The huge, destructive crash to which we’ve grown accustomed,” Stewart said, “never materialized. It wasn’t the ‘big one, but it still cost us our race. It’s a theory that I’ve been advocating for much of my adult life, and that’s the notion that ‘size doesn’t matter.’”

10. Jeff Burton: Contact with Dale Earnhardt, Jr.’s No. 88 car on lap 133 sent Burton’s No. 31 Caterpillar Financial car into the wall and sliding to a fiery stop. Burton finished 41st, and fell two places in the points to 10th, 352 out of first.

“Earnhardt, Jr. is NASCAR’s most popular driver,” Burton said. “So, it’s with a nod to a classic Tom Cruise movie when I say I was ‘top-gunned’ when Junior sent me for the ‘turn and burn.’”