Heartbreak on the Highbanks for Jennifer Jo Cobb at Talladega 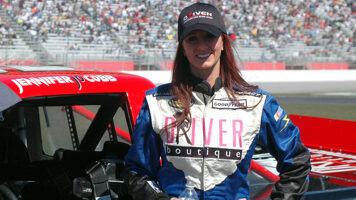 Boys, move over because the lady’s coming through … or at least she was until a sputtering fuel cell ended it all.

Entering the Camping World Trucks Series 33rd race of the 2010 season, the Mountain Dew 250 at Talladega, Jennifer Jo Cobb was a happy girl. She just had a feeling that she was going to have a good day.

The truck was prepared and described as great, the speed was the fastest she’d gone in her life and a little boast was coming from an important man named Bruce.

The No. 10 Drivenmale.com / DriverBoutique.com Ford, nicknamed Bruce in honor of hauler driver Bruce Cover who has been battling pancreatic cancer, was 13th quickest in practice and qualified 21st for Saturday’s race. With little experience in the draft after being caught up in an early wreck at the season-opening race in Daytona, Cobb spent much of practice following the veterans.

When interviewed on SPEED during the pre-race show, which Cobb also showed her acting side when dressing as ‘Ginger’ from Gilligan’s Island, Cobb said, “You never know when a surprise win might come …”

When the green flag flew it was clear she had not only done her drafting homework, but could be that surprise. Charge to the front and lead the most laps? No. Make three-wide spectacular passes or flip through the infield? No.

But Cobb didn’t need to in order to get everyone’s attention.

Working the draft she quickly a rhythm and worked her way into the top 20. Keeping with the lead pack for the entire race Cobb was in the right lines when they were moving toward the front and as such she was soon breaking into the top 15 and then the top 10.

On lap 55 she was running ninth but four laps later hearts broke. As the field roared toward the tri-oval and then the start-finish line, Cobb began to lose the draft. Soon she was out of the camera shot and contention.

The No. 10 went one lap too many from their fuel window and then didn’t make it around to pit road and ending up losing four laps and finishing 23rd. Heartbreak on the high-banks of Talladega again for Cobb who didn’t even complete two laps of the 2009 event because of a blown engine.

The finish fortunately didn’t drop Cobb in points, she still sits 17th and in search of the highest finishing points position for woman. Little consolation for a team that has had many great runs this season, including two career best finishes of 14th at Texas and Darlington.

There could be many more had more breaks a little luck gone their way. Luck such as not blowing a tire and hitting the wall in Martinsville last weekend, or being spun by Kyle Busch in Bristol and later destroying the truck all together.

Not even 24 hours after the disappointing Talladega finish, crew chief Steve Kuykendall was already back to work for the Texas race. After praising his driver Kuykendall wrote on his Twitter page, “Had a problem with the fuel, second can. Got greedy and wouldn’t pit under green without a drafting partner and I gave up a top 5 finish!”

Many great racers have stated that in order to win, you first must know how to lose. Talladega may have been that race for Cobb and her team as they now look to Texas for another career best finish. The truck this weekend will be named Jimi as they continued the tradition of naming each piece that graces the racetrack.

The day is coming however, when Jennifer Jo Cobb Racing will catch all the breaks and luck to get the finish they’ve been fighting so hard for. And then, they’ll be able to name one of their trucks, “Winner.”