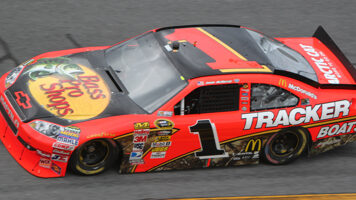 Since October 23rd, possible manufactures switch for Earnhardt-Ganassi Racing (EGR). Ford has rumored to have made an offer to EGR that’d benefit them that’d draw them away from Chevrolet. However, Racehub reported tonight that EGR signed a three-year contract with Chevrolet.

The move was being considered after looking at the manufacture ranking and the fact that both EGR drivers, Jamie McMurray and Juan Pablo Montoya, failed to make the Chase. Despite this, the pair managed to score four wins this year, including McMurray winning both the Daytona 500 and the Brickyard 400.

As according to FOXSports.com, their sources said that Ford started discussion back with July.

If Chip Ganassi had made the switch from Chevrolet to Ford, it would have moved them up in the manufacture ranking. With Chevy, they’re currently fourth in line behind Hendrick Motorsports (HMS), Richard Childress Racing and, Stewart-Haas Racing (who has an alliance with HMS). If they had gone to Ford, they’d only be second to Roush-Fenway Racing. By being higher in the manufacture ranking, it’d allow them to get better technical support.

A spokesperson for Ford also told Sirius Speedway that the offer from Ford is supposedly worth more than their current deal with Chevrolet.

“The offer is on the table, and it’s up to them whether or not to take it,” the spokesperson said. “If this was a strict business decision, I think Chip (Ganassi) would make the move. But racers are a pretty loyal bunch. I honestly think it could go either way.

It all looked great on paper, though would it be something that Ganassi would want to do and chance? What if things don’t go as they should and it doesn’t help the team? As they say, if something’s good, then don’t mess it up and overall, they’ve had a pretty decent year.

Also if they had made the switch, they would have lose their engine package with Richard Childress Racing. Earnhardt Childress Racing Technology (ECRT) Engines have won eight races this year, second only to Mark Cronquist’s engines at Joe Gibbs Racing who have nine wins.

The switch would’ve caused EGR to have to build their own motors or work out a deal with Roush-Fenway Racing (RFR). Though is that something that’d be something that Ganassi would be interested in doing considering the liability issues this year with RFR motors?

Officials at EGR have said that they don’t have plans to leave Chevy due to the long-standing relationship for the Earnhardt clan with Chevy and the fact that the motors are the best in the business right now.

Also, had EGR parted ways, it would’ve had other implications.

Past what has been discussed, Furniture Row and Tommy Baldwin Racing were set to join the ECRT alliance so if the alliance gets broken via a manufacture switch for EGR, how does that affect them?

If the switch would have happened, there’d probably would have been a bunch of unhappy fans and it would’ve taken EGR another step away from Dale Earnhardt’s beginnings with Dale Earnhardt Incorporated as Chevrolet was his main manufacture.