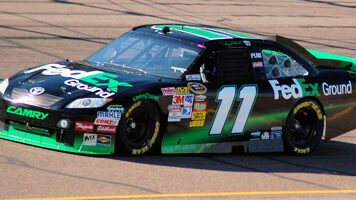 Note these are all fictional
1. Denny Hamlin: Hamlin lead 190 of 312 laps at Phoenix, but a late stop for fuel cost him a chance at the win and nearly cost him the points lead. He entered the race with a 33-point lead, and after finishing 12th, left with a 15-point edge over Jimmie Johnson.
“Points can evaporate as quickly as gas,” Hamlin said. “But you can tell Jimmie Johnson that Denny Hamlin isn’t ‘going away.’ He can say that the magnitude of the situation got to me, but the truth is, the only pressure I was feeling was fuel pressure.”
2. Jimmie Johnson: Johnson finished fifth in the Kobalt Tools 500, conserving fuel over the final laps, and cut deeply into the points lead of Denny Hamlin, who had to pit for fuel with 14 laps remaining. With one race remaining, Johnson trails Hamlin by 15 points.
“Hamlin’s 33-point lead is now 15 points,” Johnson said. “And speaking of things that were ‘cut in half,’ the ‘48’ pit crew became the ‘24’ pit crew in Phoenix.
This is the closest Chase For The Cup in history with one race to go. There are three drivers with a shot at the Cup, which is three times what I’m used to. This Chase may be different from all the others, in that someone may actually get ‘caught.’”
3. Kevin Harvick: Harvick bounced back from a pit mishap to score a sixth at Phoenix, and positioned himself for a decent shot for the Sprint Cup championship. Harvick is 46 points behind Denny Hamlin, and will need a solid finish at Homestead, along with trouble for Hamlin and Jimmie Johnson, for an unlikely championship.
“I have no problem wishing ill will on others,” Harvick said. “But, as Hamlin can attest, I’ve even better at directing ill will toward others.
Hamlin and Johnson have proven to have the most formidable cars this season, race in and race out. But there’s something that travels even faster than they do, and that’s bad news.”
4. Carl Edwards: Edwards ended a 70-race winless streak, taking the Kobalt Tools 500 for his first Sprint Cup win since Homestead in 2008. Edwards also won Saturday’s Nationwide Wypall 200 to complete the weekend sweep. He is now fourth in the Sprint Cup standings, 264 out of first.
“Kyle Busch may have done it first with his double-barreled middle finger display last week in Texas,” Edwards said. “But I’m proud to say I’m the latest to pull off the ‘flippin’ double.’”
5. Jeff Gordon: Gordon finished 11th at Phoenix, as handling issues handicapped his efforts and placed him on the verge of his second winless season. He is sixth in the point standings, 338 out of first.
“I’m not sure what I’ve lost more of this year,” Gordon said. “Races, or respect for Jeff Burton.
Once again, Chad Knaus has proven that he’s the most astute crew chief in the business. On Johnson’s final pit stop, Knaus immediately called for Johnson to conserve fuel, while the tactic didn’t even cross Mike Ford’s mind until much later. So, it seems I’m not the only Hendrick driver who’s capable of beating someone else to the punch.”
6. Matt Kenseth: Kenseth finished seventh in the Kobalt Tools 500, his second straight top-10 finish and 13th of the year. He is now fifth in the point standings, 311 out of first.
“Carl Edwards had a great week in Phoenix,” Kenseth said. “He’s got plenty to build on for next year. Greg Biffle’s got two wins this year, but I believe he’s ready for this year to be done. I am as well, but to a greater extent. Collectively, you can call us ‘Done And Doner.’”
7. Kyle Busch: Busch finished an uneventful 13th at Phoenix, one week after being fined $25,000 for an obscene gesture directed at a NASCAR official at Texas. Busch now sits seventh in the points, 347 out of first.
“I guess paying $25,000 for a middle finger,” Busch said, “is what’s known as having your ‘emotions in check.’”
8. Greg Biffle: Biffle benefitted from several frontrunners falling short on fuel to pull out a fourth-place finish at Phoenix, his ninth top 5 of the year. He improved one spot in the Sprint Cup point standings to eighth, 349 out of first.
“This Chase For The Cup has had everything,” Biffle said. “Trash talk, physical confrontations, flying car parts, and failed inspections. Or, as I like to say, ‘a Carl Edwards career retrospective.’”
9. Joey Logano: Logano finished third at Phoenix, his 16th top-10 result and fifth consecutive finish of seventh or better.
“I’ve served notice that I’ll be a force to contend with next year,” Logano said. “Hopefully, I’ll be a force to contend with in the Chase, and not out. My recent finishes make one thing crystal clear, though. And that’s that I’ll have a good view for the finish of this year’s Chase.”
10. Kurt Busch: Busch started third and finished ninth at Phoenix, posting his 17th top-10 finish of the year. He moved up one spot to tenth in the point standings, and trails Denny Hamlin by 429.
“This is shaping up to be the most exciting Chase finish in history,” Busch said. “The anticipation is overwhelming. Everyone, and not just racing fans, is talking about Hamlin, Johnson, and Harvick. So much that even my ears are burning. And I lost all feeling in those years ago.”