NOTES FROM THE NASCAR NATION: Some outstanding Nationwide Series business 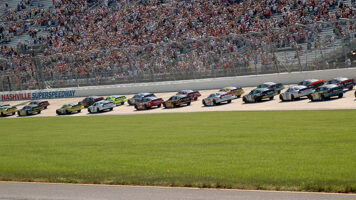 [/media-credit]NASCAR’s Nationwide Series will be playing a major role in the champion’s weekend at the Homestead-Miami Speedway in Florida with Saturday’s running of the Ford 300. The 2010 series championship is of course already wrapped up. Brad Keselowski took care of that piece of business last Saturday in Phoenix. However, the series’ owner’s championship and rookie title are still up for grabs and that resolution could get quite interesting before the race is over.

The big contest in the Ford 300 is going to be centered around the series’ owner’s points championship. Joe Gibbs, owner of Kyle Busch’s #18 Toyota, currently leads those standings by a margin of 41 points over Jodi Geschickter, the owner of record of Brad Keselowski’s #22 Penske Racing Dodge.

This points battle became tighter following last Saturday’s Phoenix event. Going into that race Joe Gibbs held an 81 point advantage over their season rival. But a cut tire hampered Kyle Busch’s race effort and the team had to settle for a 16th place finish. Meanwhile Keselowski had another strong race and brought his car home with a third place finish that cut the Gibbs’ lead in half.

In recent years the owner’s title has increased in importance to the Nationwide Series teams. Joe Gibbs Racing could be in line to tie a series records by winning three consecutive owner’s titles. The last time this feat was accomplished was by former series owner Bill Baumgardner who won consecutive titles from 1995 to 1997. Traditionally, the championship driver usually delivers the owner’s title as well. If Kyle Busch can deliver Gibbs another title this Saturday, it will mark the fourth time in series history that the two titles were split among two different teams.

Kyle Busch is the defending race winner from last year and has a very healthy average finish ratio of 11.8 at the Homestead-Miami Speedway. However, there’s a streak that he will want to bring to a complete halt this Saturday. The last time the 12 race winner visited a Nationwide Series victory lane was back on October 9th at the Auto Club Speedway in California. Since that time Keselowski has won two consecutive races followed by two consecutive wins from the red hot Carl Edwards.

Meanwhile Brad Keselowski has his own agenda for Saturday’s Ford 300 that goes well beyond just winning the race. He of course wants to give team captain Roger Penske a second championship within a period of seven days by winning the owner’s title. Also, he plans on setting a new series record for the most top five finishes in a single season. The present record, 25, is currently shared by Kyle Busch and 2000 series champion Jeff Green. Keselowski also plans on extending his streak of running at the finish which is currently 101 races.

Going into the Ford 300 there’s only eight points separating the contenders for the Nationwide Series’ 2010 Raybestos Rookie of the Year title. The combatants are Ricky Stenhouse Jr, driver of the #6 Roush Fenway Racing Ford and Brian Scott, driver of the #09 RAB Racing Toyota.

Each of these young drivers has endured unexpected distractions during the course of their 2010 racing season. Stenhouse, who is hoping to become the fifth Roush Fenway Racing driver to win the rookie title, is well aware that he’s lucky to have this ride. Stenhouse began the season by becoming a model of inconsistency. There were poor finishes and crashes that even began to tax the patience of Jack Roush. When Stenhouse failed to qualify for last summer’s Nashville race, Roush benched him for a short while. That was a major wake up call for the young driver. Since that time he’s collected two top five finishes, seven top tens and has improved his average finish ratio to 19.9.

Brian Scott also endured his own distractions. He began the season with Braun Racing and was showing a great deal of promise. But late in the year Braun sold his entire Nationwide Series operation to Turner Motorsports and Scott suddenly found himself becoming a free agent without a ride. He made quick work of joining RAB Racing to finish out the season. But there’s no need to worry about this talented young driver. He will be joining Joe Gibbs Racing, as a full time Nationwide Series driver, next year. He’s going to be just fine.

The race has 46 entries vying for the 43 starting positions.

16 of those entries are on the go or go home list. These teams are not guaranteed a start in the race because they are currently outside of the top 30 in owner’s points. These teams will have to rely on their qualifying speed to earn a starting berth.

14 of the entries are double duty drivers meaning they are entered in both the Nationwide and Sprint Cup series events.

The Ford 300 is the last ever race for the current Nationwide Series car. The series version of the car of tomorrow will be implemented full time in 2011.

The Ford 300 will be broadcast live by the ESPN2 Network beginning with the pre race show at 4 pm eastern time.