Jimmie Johnson Officially Crowned Champion But the Question Remains: Did We Really See That? 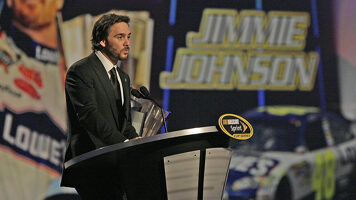 [/media-credit]Has it really sunk in yet what he and No. 48 Lowe’s Chevrolet team from Hendrick Motorsports has done? The records that Johnson has broken and then made and even the comparisons that he’s drawn to other sports and athletes should now be well documented as we embark on the second week of the offseason.

But watching the driver partake in all of the festivities during Champions Week and then give yet another speech to close out the banquet brings the accomplishment to another level. Slaps you in the face almost.

Continually staring at those five trophies in every photograph helps too.

“As shocked as you are, I’m equally as shocked to find myself in this position,” said Johnson.

Shocked doesn’t begin to describe it. Entering the season everyone knew it was possible that Johnson and company were again going to do something that had never been done before. It was a possibility – no one [besides Johnson fans] believed it was going to turn into reality.

With Denny Hamlin and Kevin Harvick hot on his heels and putting up extraordinary numbers during the regular season, and then through the first half of the Chase, it was looking more likely that this was the year it all ended. This would be the year that Johnson had to handle not being on top.

But just like the last four, he proved everyone wrong. A few weeks before Homestead, Johnson sternly replied with a “says who?” in terms of the series needing a new champion.

With the season now over, he can say it again to all those who believed it couldn’t or wouldn’t be done.

To repeat: that’s five straight championships. Not one title like Terry Labonte or Rusty Wallace. Not three like Cale Yarborough or Darrell Waltrip. Five like Jimmie Johnson.

Jeff Gordon, Johnson’s teammate and co-car owner, spoke of the great accomplishment at the banquet. Saying that what the team has done is truly incredible.

“There are so many factors that weigh into winning a championship,” he said. “There are just so many things that can go wrong. And so to win two or three or even four, I thought was amazing. But to go win five? I don’t think anybody else will ever do that. I really don’t.”

He’s not the only one.

From a personal standpoint it has been an amazing season. As a fan of the sport it honestly sucks watching the same driver take home the big trophy at the end of the year. To read all the same articles and hear the same speeches grows old.

As a journalist, I can honestly say this may never sink in.

Watching Johnson win back-to-back titles in 2006-2007 was a bit refreshing; it hadn’t been done since the late 1990s. It was something new to write about. Then he goes and wins three straight and it was great to be able to talk about his tie in history and flirtation with making new history.

Then came No. 4 and it was just stupid. Stupid in a good way and amazing as well, like Gordon said.

Five though, sounds like a joke. It can’t be real.

The 2010 season will go down as one of the most competitive in the 62-year history of NASCAR. There were 18 different pole winners. It was the closest Chase since its birth in 2004 as the top two drivers headed to Homestead separated by only 15 points. There were 55 drivers that led at least one lap this season. Talladega broke the record for lead changes.

With the sport constantly evolving and the teams becoming more competitive, how is it that the 48 have continued to beat everyone? That’s been the burning question since the season ended. It’s what has made this so unbelievable.

There have been times when you think they’re going to lose, such as this year, and they haven’t. Hamlin gave it everything he had and went into Homestead with the point lead. Finally, the fans chanted. Finally.

Except, Johnson found a way to win. Finding ways to win, whether it’s changing pit crews or capitalizing on others mistakes, and it’s driving everyone crazy.

Can they be beat? Will they ever be beat? How much further can our jaws drop and can we ask if we really did see that?

This shouldn’t be that hard to grasp. After all, this is a team that has done everything it was thought impossible to do. It shouldn’t be hard to watch history unfold before our eyes and see one driver take the sport and turn it upside down. Yet, here we are.

Should Johnson go on to win a sixth in 2011, the fans might have to start picking each other up off the floor. Or at least send someone to pick me up.