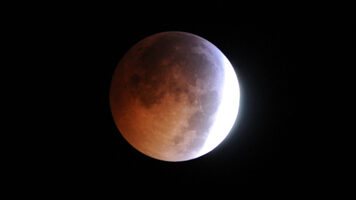 Last night’s lunar eclipse wasn’t exactly Jupiter aligned with Mars, but it was a spectacular event.

For those race fans from Venus and Mars who did not see the rare celestial congregation, I have enclosed a picture for your viewing pleasure.

Bulging at the seams, the Speedway Media mailbag is proof positive there have been other noteworthy events this past week.

Since our last installment, the hard working e-mail man has filled our Tupperware bowl with cards and letters from fans around the short track.

Denny in Detroit writes: Dear Speedway Media: Did Rick Hendrick really buy a car for $225.000?
Rick Hendrick did buy a new Chevrolet Volt, the first one available for sale to the general public, for $225,000 via an online auction. Proceeds of that sale will go to benefit various portions of the Detroit Public Schools Foundation.

Because it is a charitable donation, all of the money above the original $40,000 MSRP of the car, approximately $185,000, is a tax deduction.

Also, since the purchase was made before the end of 2010, Hendrick will also receive an additional $7500 federal energy tax credit for purchasing an electric car.

Hendrick, a collectible car enthusiast, also has a first issue Chevrolet Corvette ZR1 in his museum.

Bob in Boston writes: Dear Speedway Media, was the repaving of Daytona International Speedway a success?
The repaving of DIS was an absolute success Bob. It was done in record time, within budget, and, with the help of DIS President Joie Chitwood III, the most publicized construction project in recent NASCAR history.

Even with all that success, there is one little issue here. It is still Daytona, and the racers are still harnessed by restrictor plates.

While visiting the track last week for tire testing, it was difficult not to think about how much money ISC had spent, how great a job their newly acquired construction company had done, and how refreshed the track looked with its new face lift.

But still, other than a smoother ride, the cars will really not go any faster.

To add some perspective, just imagine this.  A hurricane is only moments away and all you have is a handkerchief. It’s obvious you need to do more, but chose not to.

Not a good analogy? Still confused?  Ok, lets look at it from a racing perspective.

Consider Dale Earnhardt Jr. who basically got a complete makeover after leaving DEI. He partnered with a new owner, received new equipment and has acquired several new crew chiefs.

He still doesn’t go any faster.

Ron in Roanoke writes: Dear Speedway Media: Is Kasey Kahne’s new car number a good sign or a bad sign?
Kasey said the No. 4 was his favorite number Ron. Looking back at a few things, I find the No. 4, alone and in a group, might just be a lucky charm for KK.

Let’s do a little “by the numbers.”

Ernie Ervin’s second win (a divisor of 4) came in the Daytona 500 driving the No. 4 Kodak Chevrolet.

Sterling Marlin’s first and second career wins were the Daytona 500, driving the No. 4 Kodak Chevrolet.

Kahne has now raced for all four NASCAR manufactures, had four different team names and will be the fourth driver in the Hendrick Motorsports stable starting in the year 2012, which happens to be divisible by four.

And finally, should Kahne win the season opening Daytona 500, it will be the fourth for the No. 4.

Well that’s about it for this weeks edition of Speedway Mailbag. I usually comment on more letters, but I was distracted by the overwhelming amount of advertising in this week’s e-mailbag.

Who knew you could get 50 million dollars from an unknown rich widow in Bangladesh, check your credit score, and buy non-prescription prescription medicine, all by e-mail.

Feel free to send your questions, comments and suggestions to mailbag@speedwaymedia.com.

Opinions expressed in this article are those of the author and do not reflect the opinion of management.