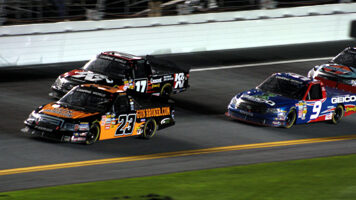 As the days continue to count down to the Camping World Truck Series opener, more and more teams are making announcements so lets get you up to speed.

Chris Fontaine is set to make his first Daytona Truck start when he pilots the No. 84 Toyota Tundra for Glenden Enterprises on February 18th. Fontaine has raced at Daytona before, but never in the Camping World Truck Series. He ran the i-Power DASH race in 2004 where he finished 15th after starting 17th. It will mark his 25th career start in the NCWTS.

Fontaine has restrictor plate experience as last October at Talladega, he led a total of 15 laps.

“I learned a lot about drafting, a lot about the side draft, who I can work with, who will work with me and when to go to the outside. I learned a lot about the restarts and a lot about coming to pit road at those speedways,” Fontaine said in the press release. “So, a lot of the things I didn’t know and was nervous about, I don’t have to be this time so I can concentrate on doing the best that I can do, and concentrate on what is going on instead of worrying. I feel a lot of confidence going into the race and I am really, really looking forward to it.”

Fontaine has yet to determind if he will run the entire schedule as he says, “We are going to take it one race at a time.”

Chase Mattioli to Run Full-Time in Trucks in 2011

Chase Mattioli announced that he will be running in the NASCAR Camping World Truck Series full-time in 2011, starting at Daytona. Team and details to be announced in the coming weeks.

Bodine to Run Cup, Nationwide and Truck Races at Daytona

The 2010 Camping World Truck Series Champion has been racing in NASCAR for 24 years, but has never competed in all three of NASCAR’s top divisions at Daytona in one weekend. 2011 is going to mark a change as the veteran is going to race in all three.

For the Camping World Truck Series race on February 18th, Bodine is going to race the No. 30 truck for Germain Racing as he starts his quest of defending his title.

For the Nationwide Series race on February 19th, he will be the car that Michael Annett’s drove to a 14th-place finish in the 2010 Owner’s Standings.

“Obviously the truck is what we do, but given the Germains had a top-30 Nationwide team and it’s locked into the race, why wouldn’t you run it?” Bodine told NASCAR Online. “My speedway record is pretty good, so they wanted me to drive it.”

For the Sprint Cup Series on February 20th, he will be attempting to qualify the No. 64 car, owned by Larry Gunselman, into the field. Bodine tested with Gunselman’s team for two days last month at Goodyear’s tire test and said, “We’re going to race the whole race.”

Bodine has 11 top-five and 17 top-10 finishes in 37 career starts at Daytona with two victories.

Bodine has seven consecutive top-five finishes in Daytona Truck events, including four in a row of either first or second. He has also showed his restrictor plate track dominance at Daytona’s sister track Talladega Superspeedway in the Truck Series as he has two wins and four top fives in five starts.

There is sponsorship in place for all three programs, which has yet to be announced.