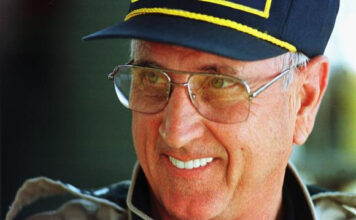 Dave Marcis was one of the last of a dying breed. He chose to walk his own path as an independent owner/driver with little or no factory support. The life he led was not an easy one but Marcis was never afraid of a little hard work.

If you look at his statistics alone, you won’t see a lot of wins or any championship titles. But if you dig a little deeper, you’ll soon discover why he is one of the most respected drivers in NASCAR history.

Dave Marcis was born in the small town of Wausau, Wisconsin on March 1, 1941. Often described as hard working, stubborn and opinionated, Marcis was determined to do things his way. He set himself apart from the other drivers right down to his shoes. If you mention Marcis’s name, people will likely remember two things; his work ethic and the wingtip shoes he wore to protect his feet from the heat while driving his racecar.

His first NASCAR start was in 1968 at the Daytona 500. Over the course of his career, he set two records at Daytona International Speedway that still stand today. Marcis has the most career starts at 33 and the most consecutive starts at 32, from 1968-1999.

He remembers his first race in Daytona and how Smokey Yunick came to his aid when he was having problems with his car. Yunick was famous for reading between the lines of the rule book and thinking outside the box.

“When I went to my first race in Daytona, I went and talked to Smokey about how to fix the problems I was having. He gave me a set of special push rods to put in the engine and said I should order some more,” Marcis said. “He gave me a part number, and when I called the company, they said there is no such thing. Yet I had a set in my hand that Smokey gave me.”

When Marcis retired, he was second on the all times starts list in NASCAR behind Richard Petty. Since then, Ricky Rudd has passed him, putting Marcis in third place on the list today.

Marcis drove for some of the top teams of the day including Nord Krauskopf, Penske Racing and Osterlund Racing. His best season was in 1975 when he drove Krauskopf’s K&K Dodge Charger, and finished second in the points standings.

In 1978, driving for Rod Osterlund, Marcis had 30 starts and finished in the top 10 an unbelievable 24 times. However, at the end of 1978, he abruptly left Osterlund Racing and decided to field his own team. He was replaced by the late Dale Earnhardt who became a close friend.

Between 1974 and 1982, Marcis finished out of the top ten in points only twice. By the mid 1980s, however, his performance took a downward turn as it became more difficult to compete with the big money of the factory teams.

Throughout his career Marcis also did most of the testing for the IROC series along with Dick Trickle and Jim Sauter. He was originally hired by Mark Donohue, winner of the 1972 Indy 500. Donohue gave Roger Penske his first win of the historic race and won the inaugural IROC championship. Marcis’s association with IROC lasted for 30 years.

Marcis may have retired from NASCAR in 2002 but he hasn’t shown any signs of slowing down.  He took his love of racing and turned it into a successful business venture named ‘Street Rods by Dave Marcis.’

Among his racing buddies, Marcis is quite well known for his huge appetite. His second love led him to open a hotel/restaurant in Wisconsin called Camp 28 Resort Hotel.

The end of Dave Marcis’s career closed a chapter in NASCAR history. The day of the independent owner/driver is almost extinct but Marcis has no regrets when he looks back on his life.

“I think what I accomplished, the way I did it and the money I had to do it with, I personally think I done very well. I think that I was a good racecar driver, a hard racecar driver. I never gave up. I raced hard every lap, harder than I should have in a lot of instances.”

He went on to say that “a lot of people said I raced them too hard, even if I was a lap or two down. But I always had hopes of getting that lap back and getting some better finishes. I believed that the spectators came to see a race, and I raced. I always put my heart and soul in it, and I raced hard, hard, hard all the time.”

Marcis treasures the friendships he formed along the way.

“To me, the guys today, when they reach our age, they’re not going to have a lot to talk about.” They fly to the races and they fly out.”

“We were in a caravan and we used to eat in the same restaurants. The fans would meet us there and get autographs. That’s just how it was. It’s just completely different today.”

His memories tell a story of days gone by when fierce competitors on the track became lifelong friends off the track.

“What are they going to talk about when they retire? Us guys, we could sit around and talk for weeks,” Marcis said. “At Rockingham, after practice was over in the evening, Buddy Baker and a bunch of us, we’d go in the pine trees over there, get a crow call and shoot crows. Down at Darlington, in some of them ponds, we’d go fishing and catch bass. It was just a whole lot more fun.”

Marcis’s life is a reflection of a time when it wasn’t all about fame and fortune. It was about accomplishing extraordinary things with little money, great determination and tremendous ingenuity.

“Radioman” Doug Taylor of Taylor Communications remembers a conversation with Dave Marcis at Daytona in 1975. At the time Taylor was working to provide better two-way radio communications between drivers and their pit crews. Although the driver helmets had speakers in them, the engine noise made communication iffy, at best.

“Dave approached me at Daytona back in 1975 and said that his two-way radios didn’t work.  At the time my system worked but only on the Yellow Flag laps. Dave showed me what he had been working on and I about died laughing at first. But the more he talked, the more I listened.”

“What Dave had was a tiny transistor radio earpiece that he had in his ear with bubble gum pushed around it to seal out the noise. He told me he knew he was on the right track, but just couldn’t perfect it.”

“He suggested that I take his idea and use my engineering expertise to make a better design.  I came up with the ear mold which fit inside the driver’s ear and shut out all outside engine noise. It provided clear communication with no distortion. I used about 30 different ear mold models over 25 years.”

The legacy of Dave Marcis is best summed up in his own words.

“We have done so much, with so little, for so long, that now we can do almost anything with nothing.”

Angela Campbell
A native of Charlotte, NC, Angela (Angie) was first introduced to racing by her father. An avid fan of NASCAR, she found a way to combine her love of racing with her passion for writing. Angie is also an award-winning member of the National Motorsports Press Association. Follow her on Twitter @angiecampbell_ for the latest NASCAR news and feature stories.
Previous article
Camping World Truck Series Notebook: Fontane, Mattioli, and Bodine
Next article
NASCAR Sprint Cup Qualifying moves to Saturday at Pocono Raceway