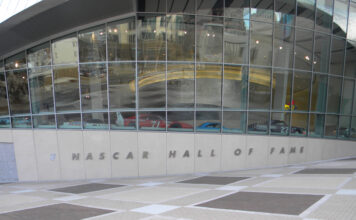 Every race fan dreams of having a NASCAR hard card, providing full access to the garage area, the drivers, and all of the behind the scenes action at every NASCAR race.  While limited only to those involved full-time at the top levels of the sport, every fan can now get a hard card just by visiting the NASCAR Hall of Fame. [/media-credit]Indeed, I got my very own hard card personalized upon entry to the HOF, located in Charlotte, North Carolina.  And I used it throughout the building, from the opening film about the history of the sport to participating in the myriad of interactive exhibits throughout the Hall.

After hard carding my way into the Belk High Octane Theatre for a truly big screen NASCAR movie adventure, I used my card to wind my way onto Glory Road. Here, poised on a race track with several degrees of banking, were actual race cars, from the Hudson Hornet to Jimmie Johnson’s most recent championship No. 48.

My hard card gave me access to go up onto the track and snap a picture of those race cars coming right at me, as well as access to try out the banking at Daytona, which I admit that I would have tumbled down without the hand rails to which I was holding on for dear life.

With my hard card in tow, I next entered the Hall of Honor, featuring the five inaugural inductees into the Hall of Fame, Junior Johnson, Richard Petty, Bill France, Sr., Bill France, Jr. and Dale Earnhardt.  There was almost a hush that fell upon us as we entered that room and paid tribute to these jewels of the sport.

I also did indeed get misty-eyed on seeing that famed black No. 3 car, complete with many mementos from the Intimidator’s days gone by and glory lost just ten years ago.

After leaving the solemnity of the Hall of Honors, I took myself and my card and headed to the interactive exhibit area.  This was where the fun began as my hard card was my access to the accumulation of points, fueling the competition with others in everything from hoisting a gas can to removing those pesky lug nuts during a pit stop.

One of the most interactive areas in the Hall was solely designed for children, focusing on educating the next generation of NASCAR fans.  The best part of that section was seeing the memorabilia from the childhoods of the likes of Jeff Gordon, Tony Stewart and Jimmie Johnson.  They were so cute as little boys, as well as just being a bit geeky too.

Another interactive exhibit in this section allows the hard card holder to actually call a race.  Donning the head sets and the microphone, I suddenly discovered how difficult that actually was to do and have renewed respect and regard for the MRN, PRN, ESPN and all of those broadcast professionals who call the races for us each and every weekend.

My favorite interactive exhibit was the race simulators, whereby you can race other fans sitting in actual race cars, driving like you stole it.  Yes, I do realize that this is all simulated but after five minutes, I was definitely working up a bit of a sweat trying to keep my car on the track and keep out of the way of all the others who were intent on either passing or wrecking me.

I am pleased to report that, after a rather difficult start where I did indeed pass the pace car, resulting in a trip to pit road to serve my penalty, I got the hang of it and actually stayed out of harm’s way.  In fact, I finished first and then promptly ran over the official on my way to Victory Lane, a first or so they tell me at this exhibit.

Waving my hard card, I admit that I immediately hurried on over to get my picture taken with the Sprint Cup.  And yes, I did hold up my index finger, striking the No. 1 pose, and yelling woo.  Unfortunately, thanks to my hard card, as well as my debit card, I have the pictures to prove it.

My NASCAR Hall of Fame hard card took me inside a race team hauler, inside a race shop of days gone by, and right past the exhibit filled with various race trophies, from the Martinsville Granfather’s clock to Dover’s Miles the Monster.

I was again moved to tears by the room honoring those lost in racing, including most recently NASCAR PR executive Jim Hunter, and moved to laughter by the staff person waving the yellow flag vociferously in the race flag display.

My final hard card stop was to purchase my souvenir pictures from my visit, as well as some shopping in the Hall of Fame gift store.  Unfortunately, the big screen television there was showing the NFL play off game but I am sure that will change in just a few short weeks when the cars get back on the track in Daytona.

So, got get your own hard card for a once in a lifetime NASCAR experience.  I will be keeping my card in a safe place in my wallet for the next time I make the trek to Charlotte and cannot wait to see what is next at the NASCAR Hall of Fame.