Trevor Bayne – The Best of Both Worlds 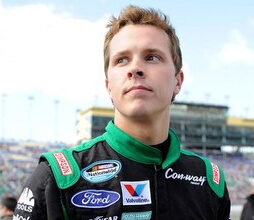 Trevor Bayne has a knack for turning adversity into opportunity.

Lack of sponsorship led to an abrupt release from Diamond Waltrip Racing in September of 2010. But just as quickly, Bayne found a new home with Roush Fenway Racing and his future has never looked brighter.

On Friday, January 20th, Wood Brothers Racing announced that Trevor Bayne will drive the legendary No. 21 car during the 2011 season for a limited number of races in the Sprint Cup series.  He’s currently scheduled to run the first five Cup races of the season and then selected races during the remainder of the season. The goal is at least 17 starts with the possibility of more.

I’ve had the opportunity to speak with Bayne a few times over the last couple of years and there are certain things I’ve come to expect. He’s always well-spoken and passionate; the perfect interview subject.

But this time was a little different.

This was Trevor Bayne in overdrive and the joy in his voice was unmistakable.

“I couldn’t be more excited about this,” he told me. “I’ve had to keep it bottled up for the last month or so while we’ve been working on it. I’ve been really pumped up and now I finally get to let it all out.

“I ran my first Cup race with them and now I’m going to get to continue with them this year. I think its awesome news.”

“They’re one of the longest standing NASCAR teams and then here I am, their youngest driver ever, so you get a little bit of both worlds.”

We talked about his first full season in the Nationwide Series and the experiences he’ll take with him as he begins the next stage in his career.

“I learned you have to be consistent. It doesn’t matter if you win every race or finish fifth or tenth. You have to be around at the end of every race. There’s no way you’re going to win a championship if you put your car in situations it shouldn’t be in.”

Another thing that sets Bayne apart from other young drivers is his ability to learn from not only the good, but the bad experiences, as well.

His unanticipated release from Diamond Waltrip Racing taught him a valuable lesson.

“Every time it seems like things are falling apart, another door opens and that’s the way it happened for me. I’m really fortunate to have these kinds of opportunities. It would be easy to point fingers or be upset about things and sometimes I feel like that. But for the most part, I try to look for that next opportunity and keep moving forward.”

Bayne is thrilled to be part of the Roush Fenway Racing team and his new alliance with Wood Brothers Racing is the icing on the cake.

His enthusiasm is infectious as he talks about his latest opportunity with the legendary team.

“You can go into their shop and almost see a piece of every bit of NASCAR since it started. It’s really cool to see that within one team. They’ve been around for everything and you can’t buy that kind of experience.”

While Bayne has been testing the No. 21 car, he’s spent his down time soaking up the atmosphere and listening to tales of the “good old days.”

“Since we’ve been down here in Daytona they’ve been telling me stories about what people used to do, just all kinds of crazy things that no one would even think about doing now or they’d be in NASCAR jail,” he joked. “It’s been really cool to hear the history.”

Bayne isn’t worried that he might be over-extending himself by running in both the Nationwide and Cup series. Instead he looks at it as opportunity for growth.

“I’m 19 years old, I’ve got all the energy in the world and I need to use it and get as much experience as I can. Obviously this is a much higher tension, more pressure situation than I’ve had in the past but I think it’s going to help me grow a lot faster, being in the seat that much.”

I asked Bayne about his plans for the future but for right now he’s happy living his dream and savoring each moment.

“I’m going to take things one step at a time. No matter how far you plan ahead, no matter how long a contract you have, no matter what anyone says, everything can change in the matter of a month or a week.  I’ve learned to make the most of what I have while I have it. I think if we do that other opportunities will come and we’ll take those when they get here.”

Trevor Bayne is bursting with energy and loving every minute of his life. Add talent and determination to the equation and you have a recipe for success.

As we ended the interview, something Bayne said, struck a chord.

“When you look around the shop you can just tell there are a lot more stories to be written.”

I can’t help but picture future generations of drivers listening to stories of Trevor Bayne and how he wrote a new chapter in the legacy of Wood Brothers Racing.

Angela Campbell
A native of Charlotte, NC, Angela (Angie) was first introduced to racing by her father. An avid fan of NASCAR, she found a way to combine her love of racing with her passion for writing. Angie is also an award-winning member of the National Motorsports Press Association. Follow her on Twitter @angiecampbell_ for the latest NASCAR news and feature stories.
Previous articleHard Cards Available at NASCAR Hall of Fame
Next articleSprint to Give Fans, Media First Look at New Miss Sprint Cup Lineup