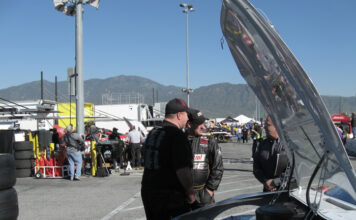 The past few years, auto racing talent has been blossoming out of Canada with a variety of drivers. Steve Arpin and J.R. Fitzpatrick are two to name a few, though another one is D.J. Kennington. In 2010, he planned to breakthrough and win his first championship. He fought all year alongside J.R. Fitzpatrick, fighting hard at each and every race. Throughout the season, he got five wins – Delaware, St. Eustache, Saskatoon, Barrie, Antigonish – and finished in the top 10 in 85% of the races.

In the final race at Kawartha, the St. Thomas, Ontario native finished third taking the championship, 87 points over Fitzpatrick.

“NASCAR has been really good to us,” Kennington said. “Really happy to get that off my back. Amazing year – five wins is awesome; hopefully this year we can top it. The 2010 season is behind us; time for 2011. Hopefully have as much success.”

One of the things that Kennington took from the season to carry forward is confidence.

“Confidence is a lot in this racing business and my team has a lot of confidence,” he said. “I think confidence goes a long way in making for another championship.”

With the championship, Kennington was invited to Irwindale Speedway to run the Toyota All-Star Showdown, along with 39 other top drivers from the K&N Pro East Series, K&N Pro West Series and NASCAR Mexico Series.

In the first practice, he was 15th, while he was 21st in the second practice.

“Excited and good in practice,” he said after the first practice. “Never seen this track before and never sat in this car. We are top 14 and I think the 17 car will be good. The track is tough to get used to.”

In qualifying, he qualified 15th, two-tenths off of the pole, set to go. Once the race started, he held his own as he ran consistent laps, steadily moving up to the top 10, avoiding trouble. When it came down to the final sprint to the finish, he had put himself into position to go after the win after some of the other leaders had fallen victim to problems. He took a late charge at leader Jason Bowles in the final nine lap sprint, though fell short and finished second. Still, Kennington was excited about his performance and the show he had put on considering expectations coming in.

“Absolutely, really really proud of everybody on this race team,” Kennington told SpeedTV viewers afterwards. “All my guys are here – it’s so amazing. I watched this race last year on my couch, its great to be here.”

The second place finish marks a good start to the 2011 season, which promises to be promising. Kennington looks to go out and defend his championship, well forming a partnership with Jason White.

“I’m excited to work with White,” he said. “He has been a friend for a long time and I think we can help each other. Having teammates really helps.”

Jason White, a native of Sun Peaks, British Columbia, comes onboard after a year of struggle from the mechanical standpoint while being a single-car team owner. The partnership brings forth horsepower and technical support from DJK Racing engine builder Doug Kennington and DJK Racing.

“After last season we took a look at our program and realized we needed to make some changes to take the next step up,” White explained in a press release. “I talked to a lot of people and different teams and knew that aligning Jason White Racing with DJK Racing was the right move. DJ and Doug Kennington will provide us with plenty of horsepower, the cars will be race ready, and you couldn’t find a more professional group to work with.”

“I could not be more keyed up about this season,” White said. “Having somebody as bright as Derek managing the operation and working as Crew chief on race day is fantastic. He brings a lot of knowledge to the job and I know he’ll make me a better driver.”

“I’m looking forward to working with Jason,” Lynch said. “Our involvement will take the strain of logistics off his plate, provide him with great race cars and allow him to focus on driving. It’s also a privilege to be associated with a great company like A&W.”

Special Thanks to Sal Sigala Jr. for the pictures and quotes