Rules, Regulations and the Speedway Mailbag. Welcome to the 2011 Racing Season 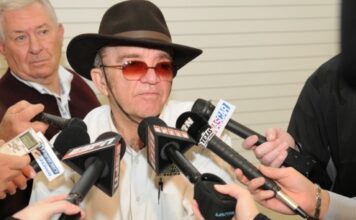 [/media-credit]Welcome to another edition of Speedway Media mailbag.

Since our last meeting, Sprint Cup drivers have spent several days testing on the new Daytona International Speedway asphalt and interacting with media from around the world at the Sprint Media Tour presented by Charlotte Motor Speedway in Charlotte, North Carolina.

Congratulations to Chip Ganassi and his continued dominance at the Rolex 24.

Rumors from the Media Tour stated that invited guest at the wedding of Kyle Busch were made to sign a release. This release guaranteed none of the guest would take any unauthorized pictures, send tweets, or publish any inside information from the nuptials.
This high level of secrecy is more than likely because of a planned future show about the race car driver’s marriage to Samantha Sarcinella.
Busch has posted some pictures on his web site.

So, since I have been traveling for the past two weeks, our ratty ole Tupperware bowl is bursting at the seams with letters, so let’s get cracking.

Brian from Bakersfield writes:
Dear Speedway Media; Do you think NASCAR racing is fixed?
Wow Brian, what a question to start off our new year of racing.
Many sporting events through out the ages have been fixed. The most famous was the 1919 World Series.
While there have been several races where drivers, and fans, feel there have been some strange decisions by NASCAR that unfairly gave an advantage to select drivers, NASCAR has absolutely nothing to gain by fixing a race.
Given there are 43 drivers, pit stops, crashes and a multitude of changes during the race, the logistics alone make it impossible to fix a race.
On the other hand though, I have it on good authority there are other types of competitions that might be fixed.
Take the Miss Universe pageant for instance. Every Miss Universe winner, including the very first one in 1952, has been from the planet Earth.

Wally from Walla Walla writes:
Dear Speedway Media; Can you clarify NASCAR’s “Don’t ask, don’t tell” rule?
Thanks for the great question Wally. After spending hours reading the NASCAR rule book, I cannot locate anything that refers to “Don’t ask, don’t tell,” unless of course you’re referring to the rule book its self.

Cindy from Cincinnati writes:
Dear Speedway Media; Have you heard any rumors about new additions to the NASCAR families?
Well Cindy we have heard some good news from Roush-Fenway Racing. During the Sprint Media Tour presented by Charlotte Motor Speedway, Jack Roush announced that three of his four drivers at RFR, Carl Edwards, Matt Kenseth and Greg Biffle, are all expecting family additions in 2011. As luck would have it, all three drivers will welcome their new baby’s right around the same time.

During the recent test session at Daytona International Speedway, David Ragan, the fourth driver in the RFR stable, was seen with an unusual “O+” on his driver’s suit.
There is speculation that Ragan is joining a growing number of race car drivers who advertise their blood types on their driver suits. In Ragan’s case it could also be a representation of the number of Sprint Cup wins he has and that he’s remaining positive.

That’s all for this weeks edition of Speedway Mailbag. On a personal note, I want to extend congratulations to Urban Meyer on his new gig at ESPN.

Feel free to send your questions, comments and suggestions to mailbag@speedwaymedia.com.

Opinions expressed in this article are those of the author and do not reflect the opinion of management.

SM Staff
Previous articleD.J. Kennington Shows Talent at Irwindale in NASCAR All-Star Showdown
Next articleJust a Moment in the Sun