NASCAR By the Numbers: Day 14 in the Countdown to the DAYTONA 500 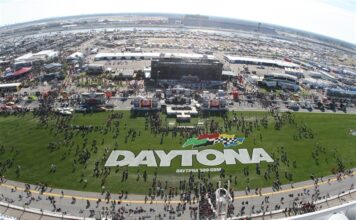 We are counting down the days until the DAYTONA 500 using some fun facts.

Number of Sprint Cup wins held by each Kevin Harvick and Ryan Newman.

Poles won during the 1980 Cup Series by Cale Yarborough. In 1984, he became the first driver to qualify for the Daytona 500 with a top speed of more than 200 miles per hour.

Total number of races where Dale Earnhardt completed all 500 laps of the Daytona 500, which is the track record.

Car No. driven by Tony Stewart. Stewart has 39 Sprint Cup wins and two Cup Series championships in 2002 and 2005. In 2009, Stewart became the first driver/owner to win a Sprint Cup race since Ricky Rudd in 1998. He went on to win four Sprint Cup races and the Sprint Cup All- Star Challenge that season. Most recently, Stewart has been in the news for a confrontation he had with the co-owner of the Sydney Speedway over track safety concerns.

SM Staff
Previous articleFrankie Stoddard: Still Chasing the Dream
Next articleNASCAR’s Digital Fan Clubs Who is best? Who is biggest? Who has the best value?