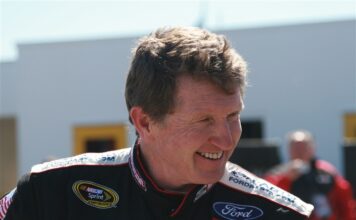 The father and son combination of Bill and Chase Elliott are at a crossroads in both of their careers.  For young Chase Elliott, fresh off his recent win at Speedfest 2011, the sky is the limit as he steps forward in his career. [/media-credit]Yet his father Bill, who will drive for James Finch’s Phoenix Racing in 2011, is most likely taking advantage of the last great ride of his career.

“This may well be my last really good chance as a driver,” Bill Elliott, age 55, said.  “I’m going to give it my best shot.  I feel like I’m still in good shape, and I thought we ran pretty good last year.”

Elliott will run the No. 09 car for Phoenix Racing in at least 18 NASCAR Sprint Cup races in the 2011 season. The No. 09 has special meaning to Elliott and his family, the car number having been driven by his late father George Elliott, as well as being his own car number, the 9, in 1975.

Along with the other NASCAR greats, Elliott will start his season by competing in the 53rd running of the Daytona 500.  The veteran ‘Awesome Bill from Dawsonville’ is no stranger to the Daytona International Speedway.

Elliott will, however, be changing manufacturers for his 2011 Daytona 500 bid.  For the first time in many years in his career, Elliott will be racing in a Chevrolet.

“It’s big for us and big for Chevrolet to get Bill Elliott,” James Finch, Elliott’s new team owner, said.  “It’s the first time in his career that he’s committed to race a Chevrolet.”

Finch also expressed confidence that Elliott, who has previously driven primarily Fords and Dodges, would be able to get the job done in a Chevrolet.  He cited Elliott’s  44 Cup wins, 55 poles, as well as his 1988 championship, as reasons for his confidence.

“With the right equipment, he’s ready,” Finch said of Elliott.  “He was just a couple of hundredths of a second off the pole at Homestead last year.”

Elliott will be teaming with crew chief Nick Harrison in his new Phoenix Racing ride.  The team plans to get their horsepower from Hendrick Motorsports.

“I think this will be a really good deal,” Elliott said.  “James has really good race cars, and there’s no doubt about the Hendrick equipment.  After all, look at all the championships they’ve won.”

While father Bill Elliott looks at starting the 2011 season staking claim to what will probably be the last chance for glory in his career, his son Chase has already gotten his young career off to an amazing start in the New Year.

Elliott, driving the No. 9 Aaron’s Dream Machine, started third in the first race for the Pro Late Models.  He quickly moved forward and took the lead, which he held until the 100 lap break.

After the break, the young driver fell back to the third position.  But he was quickly on the move again, battling David Ragan for the lead and the eventual win.

Elliott then moved on to the Super Late Model race, the main attraction of Speedfest 2011.  In this race, he started eighth, but again moved forward quickly.

“My team is absolutely the best,” Elliott said.  “I wouldn’t trade Ricky (Turner), my crew chief for anyone out there.  We had some great drivers that I raced with today, and they definitely made me work hard to get here.”

While Bill Elliott will start his 2011 season by competing in one of the sport’s biggest races, the Daytona 500, his son Chase will next race on March 6th at the South Alabama Speedway.  Young Chase will compete in “The Rattler”, the second event in the 2011 CRA Southern Six Pak Tour.