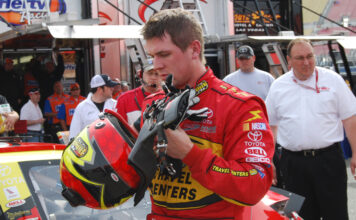 Before the official start of the 2011 NASCAR season, the issue of substance abuse again made headlines for the sport, with the arrest of up and coming driver Michael Annett for driving under the influence. [/media-credit]Annett, age 24, allegedly blew a .32 in the breath alcohol level test. This is four times over the legal limit in North Carolina, where he was pulled over after an accident.

Rusty Wallace Racing, the team for whom Annett drives, took immediate action.  The team announced that Annett will not be allowed to drink alcohol at all and will get no ‘second chance’ if he violates that requirement.

“It’s some alcohol awareness, it’s some community service, he’s at that race shop at 7 a.m. every morning,” Wallace continued. “We’ve got him polishing the freaking drive shafts because I’m pissed at him.”

NASCAR has also imposed its own sanctions on Annett as well.  The sanctioning body announced that is has paced Annett, driver of the No. 62 race car in the NASCAR Nationwide Series, on probation until December 31, 2011.

Annett will be evaluated by a certified drug and alcohol professional at NASCAR’s discretion.  The young driver will also be subject to random testing throughout the year as well.

Unfortunately for the sport, Annett is not alone in having an alcohol-related driving incident prior to or during the racing season.

In 2009, Richard Petty Motorsports young gun AJ Allmendinger was arrested for driving under the influence.  Even veteran driver Michael Waltrip has had his share of incidents, one in 2009 and another in 2007 where alcohol was suspected to be a factor in crashes behind the wheel. However, Waltrip was never charged.

With all this attention to alcohol-related issues, especially with drivers getting behind the wheel of a car after imbibing, NASCAR has indeed reacted swiftly and decisively to the various incidents.  NASCAR, as well as the race teams involved, should be commended for that.

Yet, in addition to the reaction, the sport must also seriously consider adding some prevention strategies to the mix.

Let’s face it, while not excusing it in any way, shape or form, anyone can make a mistake when it comes to having a few glasses of wine or a few beers and then getting behind the wheel.  Most of us, particularly in our youth, could claim the phrase, “There but for the grace of God go I” when it comes to those situations.

But the element that the sport may be missing when it comes to their substance abuse policy is that element of prevention. What is NASCAR really doing to educate those who participate in the sport at whatever level as to the dangers of drinking, drugging and driving prior to it happening?

As a licensed clinical social worker, as well as someone who has run programs for those who have been convicted of driving under the influence, it has been my personal experience that most individuals have no clue how little alcohol they have to have in their bodies in order to be impaired behind the wheel of any vehicle.

In fact, most folks that I have worked with in my professional career have had no idea of the alcohol content in one drink, whether it be beer, wine or other spirits.  They are also stunned when they learn of the amount of alcohol that it takes for their particular body type to be considered legally and functionally impaired.

NASCAR must consider being more proactive when it comes to prevention of substance abuse in the sport.  This is true especially in a sport where the majority of the drivers are young, male, and fearless as they need to be to even participate as a race car driver.

NASCAR, as well as the various race teams, should run regular substance abuse education and prevention courses that are required for drivers at every level. This should be a part of the licensing requirements, where not only do the drivers declare which Series they are running for championships in but they also check off that they have participated in at least one substance abuse awareness seminar or course.

Having said that, these substance abuse prevention and education requirements should not just be made for the Cup, Nationwide and Truck Series.  They should also be required in the Camping World East and West Series, and yes, should even be required in the up and coming series where those teenagers and even pre-teens are now racing.

Perhaps if substance abuse prevention and education programming was added to NASCAR’s substance abuse policy, situations like with Michael Annett will become a thing of the past.  And that would be great not only for the sport, where the athletes serve as role models to so many youth, but for the athletes themselves who can avoid having to be punished or sanctioned, to the detriment of all.

Best of all, alcohol and drug prevention and education might just save a life.  And that truly is the most powerful argument of all for NASCAR to add that ounce of prevention to the sport’s substance abuse policy.