And the First Shall be Last… 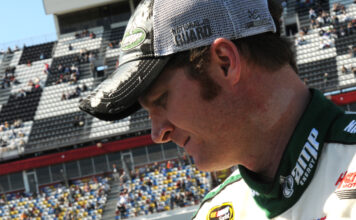 It didn’t even take 24 hours for Dale Earnhardt, Jr. to make ESPN start Tony Kornheiser look foolish. Kornheiser had made a statement on his “Pardon the Interruption” TV show on Tuesday that had NASCAR Nation boiling. His comment that a female reporter who had covered NASCAR for years told him that there was a 60% chance that Junior winning the pole was “fixed” had everyone in an uproar. And then Dale Junior met Martin Junior. Or maybe the other way around.

In a practice long delayed by rain, the two juniors came up on some slower traffic and Martin Truex, Jr. nudged Dale Earnhardt, Jr. into the infield and introduced him to the wall. Earnhardt will not start on the front row for one of the Gatorade Duel qualifying races, and most likely, since he had to go to a backup car, not start on the pole for Sunday’s Great American Race.

What stock car novices like Kornheiser fail to understand is that it is nearly impossible to fix the outcome of anything in this sport, be it qualifying or the race itself. Why? Mainly because it’s an individual sport in many ways. Yes, one baseball player can attempt to throw a game by striking out on purpose with the bases loaded in a crucial situation or one football player can not run so hard to make a tackle, but they play on teams. And regardless of how much NASCAR folks talk about teams, it’s still an individual sport. Just watch how these drivers will abandon a teammate on the last lap if they think they have a chance to win.

Many of us old-timers remember the Autoweek article penned by Al Pearce from several years ago. Pearce wrote a story called “The Call,” in which he said that many teams had intimated to him that NASCAR from time to time would “look the other way” for certain teams so that they would have a better chance to win. NASCAR denied it and there was no evidence that anyone ever got “the call.” Same situation here. Earnhardt beat Gordon on Pole Day by such a close margin that it seems impossible there was any hanky panky going on here.

It did seem like it was going to work out, though. Earnhardt has had many of those historic moments in his career, most recently his win in a Nationwide Series at Daytona last July in a car made to look like his father’s Wrangler car of days gone by. It made for good PR, but no one could ever say it was scripted.

So on the 10th anniversary of his father’s death, Dale Junior will have to race his way to the front without help from the sanctioning body. Just like he won the pole without NASCAR’s help. Feeling a little foolish, Tony? I didn’t think so.

Ron Fleshmanhttp://www.ris-news.com
Ron Fleshman has followed NASCAR racing since attending his first race at Martinsville Speedway in 1964. He joined the Motor Sports Forum on the CompuServe network in the 1980s and became a reporter for Racing Information Systems in 1994. In 2002, he was named NASCAR Editor for RIS when it appeared on the World Wide Web as www.motorsportsforum.com. He can now be found at www.ris-news.com. Ron is a member of the American Auto Racing Writers and Broadcasters Association. You can find Ron following and reporting on the top three NASCAR divisions each week. As a lifer in his support of racing, he attends and reports on nearly 30 events a year and as a member of the motor sports media, his passion has been racing for 47 years. He lives with his family in rural West Virginia and works in the insurance industry when not on the road to another track.
Previous article
Ford Gatorade Duel #1
Next article
Gatorade Duel Race #1 Press Conf. Transcript, Elliott and Yeley