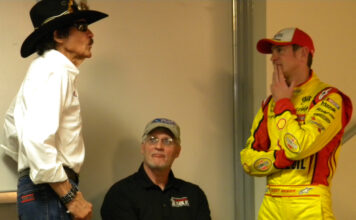 NASCAR Kurt Busch, Martin Truex, Jr., A J Allmendinger, Brad Keselowski and team owners Richard Petty and Roger Penske are used to competing out on the race track.  But this weekend they were deemed guardian angels instead to the Paralyzed Veterans of America.

“Honestly, these NASCAR drives and owners are guardian angels,” Randy Pleva, a paralyzed veteran from West Virginia and a volunteer leader with the PVA, said. “We know we can count on them and I know that they just won’t wash their hands of us ever.” [/media-credit]The new Paralyzed Veterans of America initiative, supported by NASCAR, is called ‘Mission Able’.  This effort will focus on bringing awareness to the needs of veterans who have served their country but have returned home with some sort of disability due to a war injury.

Kurt Busch, who has participating in a karting race, The King’s Cup, to benefit PVA shared why he was involved with the organization.

“I’ve been working with some military groups this year,” Busch said. “It’s a mind blowing experience to see what these men and women have been through. To have Penske Racing teamed up with PVA means so much.”

“This is my first year with PVA,” Martin Truex, Jr., driver of the No. 56 Toyota for Michael Waltrip Racing, said. “The things the military does for us, it goes unsaid how much we appreciate it.”

“They make the ultimate sacrifice for us to do the things we love,” Truex, Jr. continued. “We wouldn’t be here racing in the greatest country in the world. This is just a small thing that we can do that, when they come back from battle, there is someone battling to take care of them.”

One of the longest partners on the PVA team, at least on the NASCAR driver’s side, A J Allmendinger, was glad to have some new teammates in assisting the organization. Allmendinger donated space for the PVA logo on his Rolex car when he raced at Daytona to call attention to the new PVA program ‘Mission Able.’

“For me, it’s just an honor to be a part of the PVA,” Allmendinger said. “Every year I’ve gotten to run the PVA paint scheme during the Fourth of July.  That is a big honor.”

“The PVA has been a big part of the King and I’ve been honored to work with the great people of the PVA,” Allmendinger continued. “What they do for this country, you can’t even put into words. When they come back, we’ve got to take care of them.”

Brad Keselowski is also in tune with the needs of paralyzed veterans.  His new foundation has focused on wounded warriors and those who have sacrificed.

“If you look back to the history of NASCAR, a lot of it was started by folks that had served,” Keselowski said. “So NASCAR has a long, storied tradition of being involved with the military. Today this announcement is their next evolution and I’m proud to be a part of it.”

Keselowski also shared a personal story of a friend who was wounded by and IED.

“You see how real it is,” Keselowski said. “And you wonder who will be taking care of him. It’s very special what the PVA does.”

“It’s a pleasure for me to be here today,” Roger Penske, team owner and new PVA partner, said. “The men and women who serve our country are a big family as is the NASCAR family.”

Fellow team owner, Richard Petty, a long time supporter of PVA also weighed in on why he feels so passionately about this organization and ‘Mission Able.’

“It is the right thing to do,” Petty said. “We need to help however we can to raise money and awareness so that our military and veterans can live the lives they deserve.”

For PVA, they again reiterated how much the NASCAR partnership has meant to their organization.

“We are pleased to have these NASCAR drivers supporting our mission,” Bill Lawson, National President of PVA, said. “With their help, we will be able to continue changing the lives of our wounded heroes.”