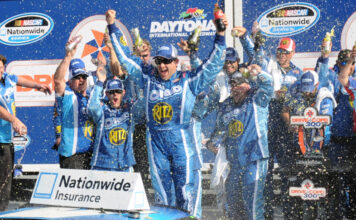 This is Stewart’s 10th NASCAR Nationwide victory in 91 races and his sixth victory at Daytona International Speedway.

“Wow is the first thing,” Stewart said simply when asked about his win. “We got to the front pretty early and once we got to Clint (Bowyer), we knew we would be a pretty potent combination.”

“We knew it was going to be between the KHI cars and the Gibbs cars,” Stewart continued. “We were sacrificing the speed to get air in the grille. You didn’t really know which strategy was best”

“We had the caution and the flat tire,” Stewart said. “I didn’t realize we had as many cars a lap down, but that is what saved us.”

Clint Bowyer, behind the wheel of the No. 33 Rheem Heating Cooling Chevrolet, came up just short of accomplishing the victory. Bowyer, who posted his 10th top-10 finish at Daytona, started the race from the pole.

“A lot of work goes into these race cars for this place,” Bowyer said. “Hats off to these guys for sitting on the pole and I had a car capable of being up front and winning the race.”

“The race was a little bit slow,” Bowyer said. “But then I found my dancing partner and we were able to make some ground and have some fun with the No. 18 and the No. 20.”

Bowyer said that he was glad to see Dale Earnhardt, Jr. at the front in his Chevrolet and the two were able to work their way toward the front. Earnhardt, Jr. finished in the fourth position.

“What do you do?” Bowyer said, reliving the end of the race. “I tried to block and then all hell broke loose. Awesome ending and that’s the thing that’s so much fun about this place. No matter what the race is, the ending is always great.”

Bowyer also worked with JR Motorsports driver Danica Patrick during the race, at one point pushing her to the front. Patrick finished the race in her No. 7 GoDaddy.com Chevrolet in the 14th position.

“Why not put her in the show?” Bowyer said of his push. “She did a good job today.”

One of the best finishes was for young driver Landon Cassill, piloting the No. 1 Phoenix Construction Chevy. Cassill managed to finish in the third position right behind both of the KHI teammates.

“It was just a crazy day,” Cassill said. “We didn’t draft at all in practice today, so it was a learn on the fly deal.”

“Towards the end there Tony got lined up behind me on the restart and pushed me through,” Cassill continued. “I just followed directions and when we had to swap with two to go, I was just glad to push him.”

“James Finch gave me this race as a gift pretty much for running his Cup car last year,” Cassill said.  “I wouldn’t be here without James Finch. He got me back in the sport.”

NASCAR confirmed that Cassill is now the official points leader, by just two points over Reed Sorenson,in the Nationwide Series. Ironically, the driver shared that he does not even have a ride lined up for the next race of the season.

“I don’t have a ride next week, so I’m just going to bask in this for the next seven days,” Cassill said of his points lead. “But if I don’t get a ride, Reed (Sorenson) will be back in the lead.”

The potential points leader, Reed Sorenson, driver of the No. 32 Dollar General Chevy, scored a top five finish. Sorenson thought this was “pretty good”, especially since he was racing against so many Cup drivers.

“The 4 and the 1 came down and we had to check up,” Sorenson said of the last lap of his race. “That pretty much ended our run. We were coming and we were going to have a shot to at least finish second or third or fourth there.”

“This is my first time racing and it’s pretty much what I expected,” Sorenson said of the new racing style. “I guess we’re going to have to get used to it.”